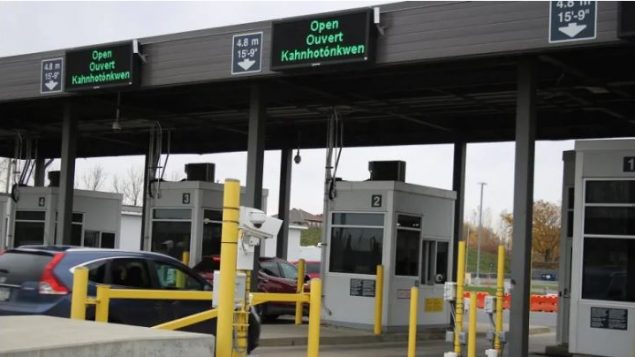 The Mohawk language is now visible, along with Canada’s two official languages, English and French, at the border crossing in Cornwall, Ontario, that is the point of entry from the U.S. state of New York.

Abram Benedict is the Grand Chief of the Mohawk Council of Akwesasne. This was his statement on the occasion:

“Akwesasronon make up almost 70% of the traffic that is processed at the CBSA Cornwall Port. For many residents/elders in our community, Kanienkeha/Mohawk is their first language. The use of our language on the signage at the Port of Entry is an acknowledgement of daily users of the crossing, and the fact that the port is on traditional Akwesasne lands. We wish to continue to advance our partnership with CBSA in order to meet the needs of Akwesasronon.”

“I’m very pleased with the new trilingual signage in Cornwall that has been developed in partnership with the Mohawk Community of Akwesasne. Our relationship with the Akwesasne community is important and the new signage is but one step on the CBSA path towards reconciliation.”

Akwsasne straddles both sides of the St. Lawrence River in Canada and the United States. 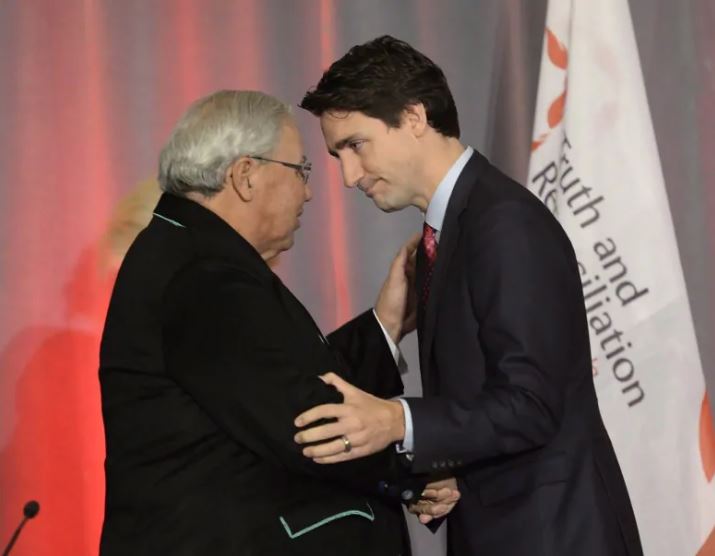 Prime Minister Justin Trudeau (right) greets Justice Murray Sinclair at the release of the Final Report of the Truth and Reconciliation Commission of Canada on the history of Canada’s residential school system, in Ottawa on Dec. 15, 2015. (Adrian Wyld/Canadian Press)

Reconciliation is the process that was begun in the wake of our Truth and Reconciliation Commission looking into the horrific treatment of Canada’s indigenous peoples over the last 150 years.

The Commission issued 94 Calls to Action. This is one more small response to those, and as it says on the CBSA website, “a step in continuing to build a Nation-to-Nation relationship”.