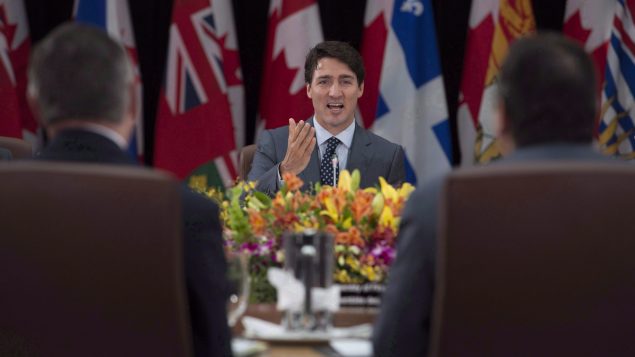 Trudeau to push for more interprovincial trade at summit in Montreal

Prime Minister Justin Trudeau will push his provincial and territorial counterparts to eliminate trade barriers between Canada’s provinces and territories at the upcoming summit with premiers and Indigenous leaders in Montreal, the Prime Minister’s Office announced Tuesday.

The First Ministers’ Meeting (FMM) will take place in Montreal on Dec. 7, 2018 and Trudeau will be joined by Minister of Intergovernmental and Northern Affairs and Internal Trade Dominic LeBlanc.

Trudeau is expected to discuss the new United States-Mexico-Canada Agreement (USMCA), and the federal government’s strategy to diversify international trade while improving trade within Canada’s borders.

Trudeau and LeBlanc will lead a discussion with premiers to explore eliminating barriers to trade between provinces and territories, the PMO said.

“Our government is committed to working with provincial and territorial governments to increase opportunities for Canadians and make our communities stronger and more prosperous,” Trudeau said in a statement. “I look forward to sitting down with premiers to strengthen our partnerships, find ways to eliminate barriers to trade between provinces and territories, and create good, middle class jobs across the country.”

The summit in Montreal comes almost a year after the federal, provincial, and territorial governments negotiated the Canadian Free Trade Agreement (CFTA) to improve the flow of goods, services, and investments across provincial and territorial borders.

According to federal statistics, internal trade between provinces and territories accounts for just under one-fifth of Canada’s annual gross domestic product (GDP), or $370 billion.

“Action by federal, provincial, and territorial partners is critical to increasing trade within Canada, which will build a stronger, more integrated economy and benefit all Canadians,” LeBlanc said. “We look forward to working with our counterparts to build an economy that works for the middle class and people working hard to join it.”

The federal government estimates that cutting red tape and other barriers that hinder trade within Canada could result in an economic benefit roughly comparable to the projected benefit of the Canada-European Union Comprehensive Economic and Trade Agreement (CETA).

Trudeau and the premiers will also meet with leaders of the Assembly of First Nations, the Inuit Tapiriit Kanatami, and the Métis National Council to discuss economic issues affecting Canada’s Indigenous peoples.

“I look forward to meeting with Indigenous leaders and continue working together to ensure Indigenous peoples can fully participate in the economy and strengthen their communities,” Trudeau said.