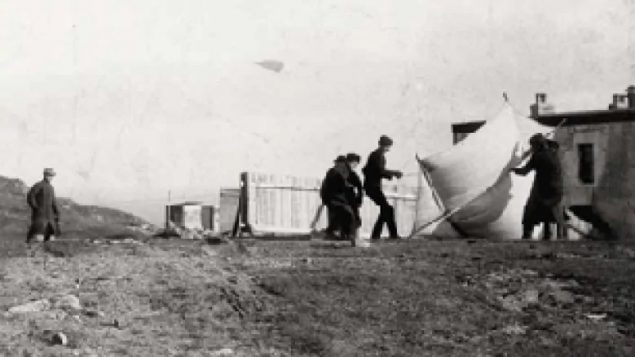 On a chilly windy December 12, in 1901 history was made, or perhaps “claimed” to have been made.

Italian inventor Guglielmo Marconi said he had received a number of scratchy clicks on his telegraphy receiving equipment set up on Signal Hill on the coast of Newfoundland. The morse code clicks were sent through the air without wires.  What is unique is that the signal had been broadcast across the Atlantic Ocean from Poldhu in Cornwall, England over 3,000 kilometres away.

The repeated sending of the Morse code signal for the letter “S” was the first wireless trans-Atlantic signal.

Detractors had said such wireless signals could not travel more than a few hundred kilometres due to the curvature of the Earth, whereas Marconi believed they would.

Ironically although the signal is alleged to have made it across the ocean, the detractors were correct.  What Marconi and others at the time could not have understood and what may have happened was the signal from England was heading into space when it bounced off the ionosphere and back to earth where Marconi’s team, flying a kite with a 121 metre long copper wire antennae picked it up.

.Only later would scientists come to understand the reaction of radio signals to the atmosphere, and this bounce or reflection of the signals. 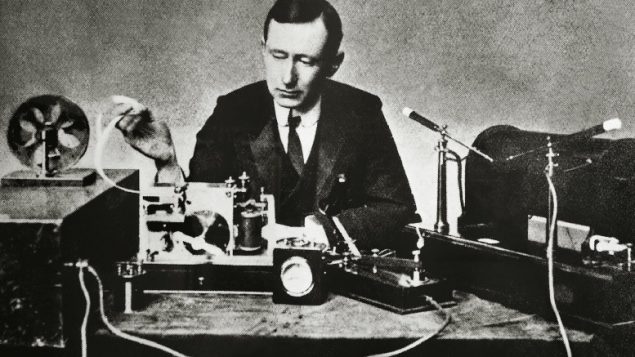 However with hefty financial backing he would eventually be able to send transatlantic signals at a later date and as the concept of propagation became better understood. Year’s later, when Marconi was awarded the Nobel prize, inventor Nicolas Tesla would sue over Marconi’s use of Tesla’s patents.
It should be noted that Marconi wireless was used by the Titanic to indicate its distress and without it, no one would have known about the disaster and there would have been no rescue ships and no survivors in the vast reaches of the cold mid-Atlantic

However, Marconi’s original claim is clouded by some skepticism.

Scientists now point out the test took place during the daylight when medium wave signals are mostly absorbed by the ionosphere and not “bounced” which would seriously limit their ability to travel great distances, especially with the low power technology at the time.

Marconi also knew what signal to listen for, so it was not a “blind” test. Scientists now say it would have been extremely difficult for anyone to detect an actual signal from the background static, especially after a couple of days of listening to the static.

Also playing against the claim is the fact that Marconi was the only one listening so there is no other “witness”.

Lurking in the background also was his desperate need to claim success in order to raise capital from investors to further his experiments.

Another doubt is raised by the fact his original receiving antenna was damaged by a storm hence his efforts to use a long wire and kite. However, the wire moving about attached to the kite would not have made for a stable receptor.

A technical analysis casting doubt on Marconi’s claim was made by radio and electronics expert John Belrose (PhD) in 1995.(link below)

Not ‘radio’, but rather ‘telegraphy’

Meanwhile, four days after this “miracle” of wireless transmission, Marconi will be officially notified by the Anglo-American Telegraph Company that it will take legal action against him unless he immediately ceases his wireless experiments and removes his equipment from Newfoundland.

Anglo-American had a fifty-year monopoly on electrical communications in Newfoundland starting in 1858, and was determined to hinder radio telegraphy, which it knows is a serious threat to its transatlantic telegraph business operated by submarine cables.  Marconi then decided to move his base of operations to Cape Breton in Nova Scotia.

Although often credited with inventing radio, Marconi actually never saw the need for voice transmission or “radio” as we know it.  In fact he was not dealing with radio in the modern sense, rather his interest was entirely focused on the commercial potential of wireless telegraphy.

The limitations of his “spark-gap” technology soon became evident and efforts to continue and improve it eventually came to a dead end.  He was obliged to abandon the concept in 1912.

Early on, a Canadian inventor Reginald Fessenden has studied the technology and realize it led nowhere. He rejected Marconi’s spark idea and developed a continuous wave technology which he felt would transmit Morse more clearly and much more importantly, also voice.

On Dec 23 1900 he transmitted voice over a distance of 1.5 km. Over the next few years he continued his research and  developed improved technology.

In 1906 Fessenden sent the world’s first true radio broadcast when he gave a short speech, and played a tune on his violin which was picked up on US Navy ships, and commercial cargo ships equipped with Fessenden radio receivers.

In 1925, another Canadian, Edward Rogers (Sr) would invent another radio breakthrough. Improving on an American invention, he created a vacuum tube that enabled operating radios on household electric current, eliminating the heavy, messy, and corrosive batteries then required.  His invention also improved technology in radio broadcasting and led to the simplicity of radio operations we know today.