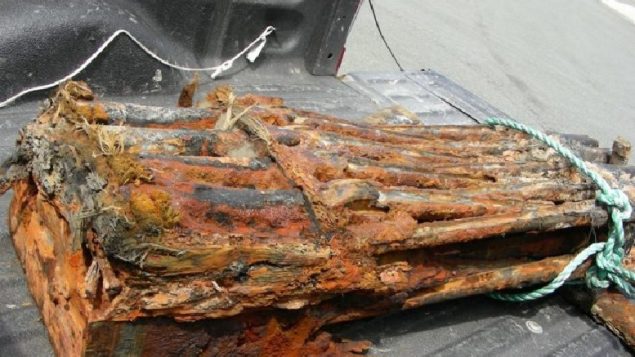 A most unusual historical find is slowly nearing it’s first appearance in public after spending about 150 years on the sea floor off Canada’s east coast .

A full crate of Pattern 1853 British Enfield muskets was hauled to the surface in the net of a Newfoundland fishing trawler operating in the Grand Banks in late 2011.

The P53 guns of the 1850’s and 60’s were deemed to be the best of their time.   Since they were first hauled up, the guns were sent to the provincial archaeology office in Newfoundland, and then later transferred to the archaeology faculty at Memorial University in St John’s. 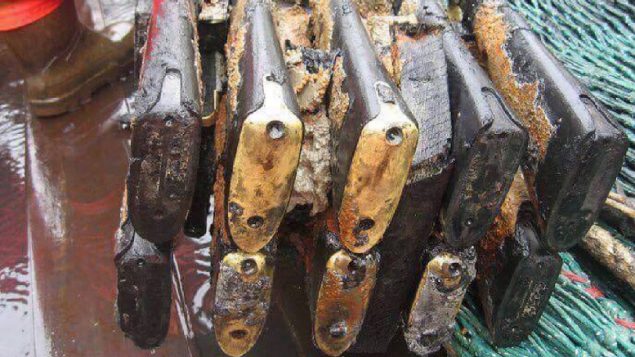 While the brass bits, like these butt plates survived (although their iron screw fasteners did not, amazingly, the walnut stocks are in remarkably good condition. (Ocean Choice Int’l),

Since then they’ve spent much of their time in a chemical vat designed to preserve the remaining wood and occasional being raised to remove grease, silt, and other debris. 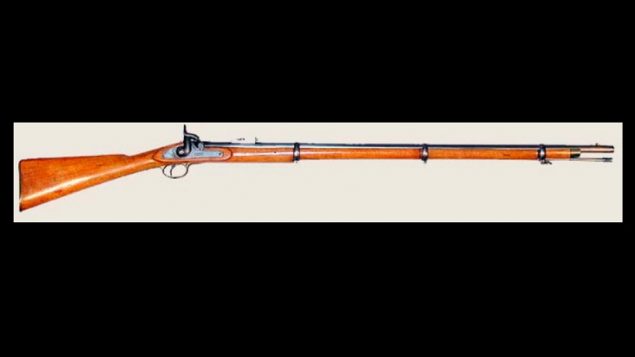 Known as 3-band Enfields, for the three bands holding the barrel to the stock, they were in use throughout the Empire as the standard British gun of the time. (wikimedia)

The iron barrels and firing mechanisms had long rusted away, but the brass fittings are extremely well preserved, as is surprisingly, the walnut stacks.

There are three theories about how the guns came to be on the sea floor in 800 metres of water, inside Canada’s 200 kilometres economic limit off the Canadian east coast. 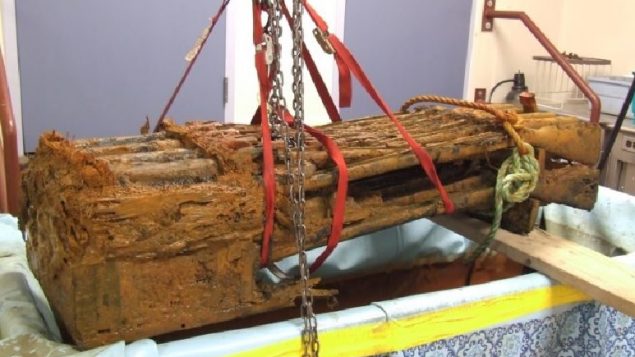 The guns spend most of their time in a special vat of preservative chemicals designed to replace water in the wood and prevent the wood drying out and crumbling. (Memorial University of Newfoundland)

Known as 3-band Enfields for the three metal bands holding the barrels onto the wood stocks, these were prised firearms at the time and used throughout the British Empire and also by both sides in the U.S. Civil war. Reproductions are still being made for black powder enthusiasts and re-enactors. 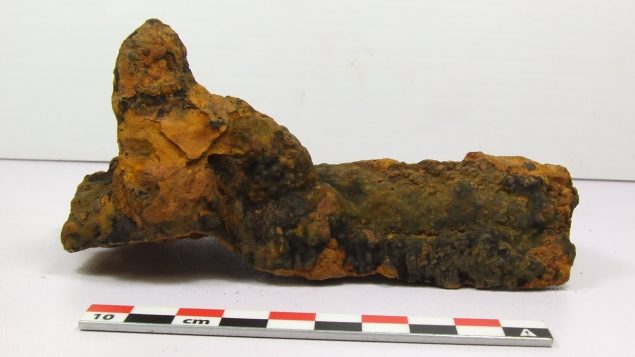 Although the ferrous barrels and other bits were gone, some evidence remained including traces of the metal barrels and this piece of the lockplate and flintlock. The guns had been packed in thick layers of animal-based grease. (MUN- D Teasdale)

One theory is that these rifle-muskets were destined to Canada for the British regular forces, or newly formed Canadian militia in the 1850’s, or alternatively were being sent back to Britain for refurbishing from muskets to cartridge loading mechanisms which was taking place in the later 1860’s. But other than a ship foundering, why they would be on the sea floor is a bit of a mystery. Researchers are studying various inspectors marks stamped into the brass butt plates to help determine dates and thus more information about their history and possible fate. 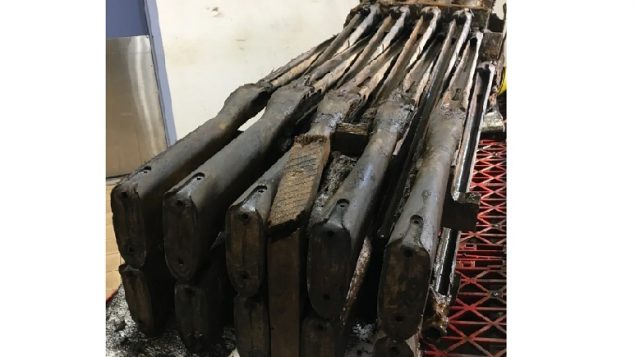 The antique guns mostly cleaned up , the early steel barrels and flintlock plates rusted away long ago. (Todd O’Brien-CBC)

A third possibility however is that these were guns aboard a blockade runner destined for the Confederate army in U.S. Civil war and may have been tossed overboard when challenged at sea by a Union ship.   A similar crate of P-53 Enfields was found  in the harbour at Charleston South Carolina in the 1980’s also destined for Confederate forces  They are now in a special tank on display in a Georgia State Park. 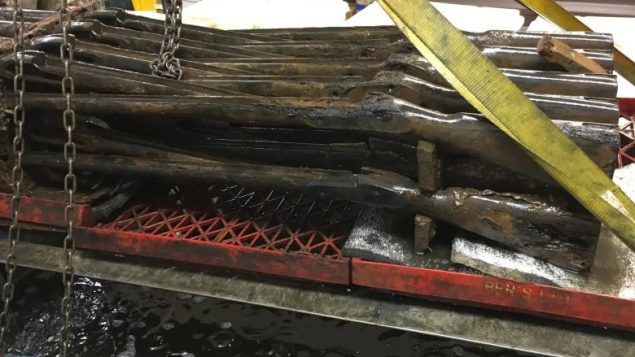 Once the preservation process is complete, the 20 guns in the remains of their original case may be placed on public display in Newfoundland. With most of the silt, grease, and other material removed, the “case” now weighs about half what it did when first brought up from the ocean (Todd O’Brien-CBC)

The antique crate has spent the last several years undergoing preservation and as the process is eventually completed, they may end up on public display at Newfoundland’s history museum called The Rooms.