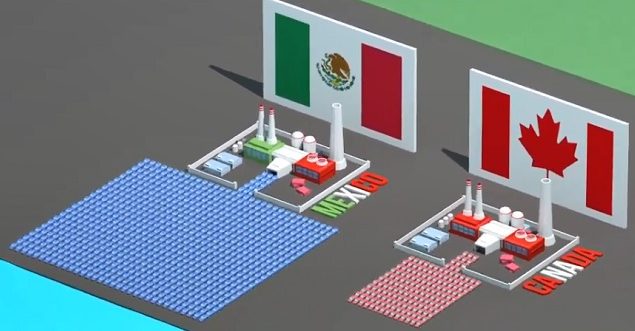 A graphic in the union ad shows General Motors vehicle production in Mexico is much bigger than that in Canada. (Unifor/YouTube)

The union representing workers at the General Motors vehicle assembly plant in Oshawa, Ontario has released a video as part of a major ad campaign against the plant’s closure later this year. The ad focuses on what Unifor calls “GM’s corporate greed” in accepting an $11-billion bailout from the Canadian government in 2008 and then shifting production to Mexico.

Some 2,700 Canadian workers will lose their jobs this year as a result of the closure.

Video airs in Canada and the U.S.

The new ad was first aired during the broadcast of the Golden Globe Awards on January 6, 2018 and is part of an advertising blitz aimed at both Canadian and American audiences. It will also appear on news channels and hockey broadcasts in Canada and in Detroit which is home to GM headquarters. It’s tag line is “Hey GM, you want to sell here, build here.”

Unifor is also planning a rally on January 11, 2018 in Windsor, Ontario.