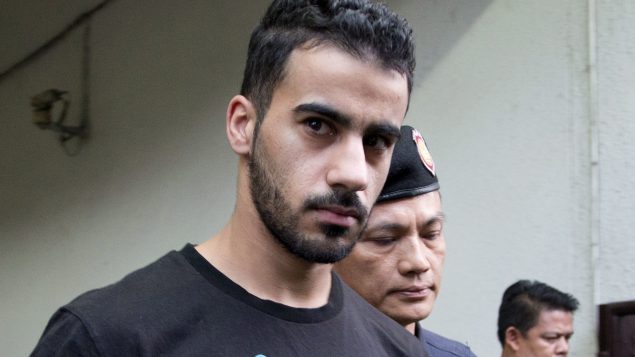 FILE - In this Tuesday, Dec. 11, 2018, file photo, prison guards escort Bahraini football player Hakeem al-Araibi from a court in Bangkok, Thailand. Thailand officially received a request from Bahrain to extradite a detained soccer player who has refugee status in Australia. The foreign ministry says the request for extraditing Hakeem al-Araibi has been forwarded to prosecutors for deliberation. (Gemunu Amarasinghe/AP Photo/File)

The wife of a well-known Bahraini soccer player has written to Prime Minister Justine Trudeau pleading for his help in getting her husband out of a Thai prison where he has been languishing since Bahraini authorities demanded his arrest and extradition in November, according to a report by The Guardian.

Hakeem al-Araibi was granted refugee status in Australia after fleeing Bahrain following what human rights groups describe as trumped up charges against him.

He faces a 10-year prison sentence in Bahrain for a vandalism conviction that has been widely discredited, according to Amnesty International.

Al-Araibi was detained in Thailand after travelling there to spend his honeymoon.

He was arrested in Bangkok on an arrest warrant issued to Bahrain by Interpol in contravention of its own refugee protection policies, The Guardian reported.

His wife, who wishes to remain anonymous, spent the first 10 days of his detention sharing a cell with him but has since had to return to Australia.

‘Time is running out’ 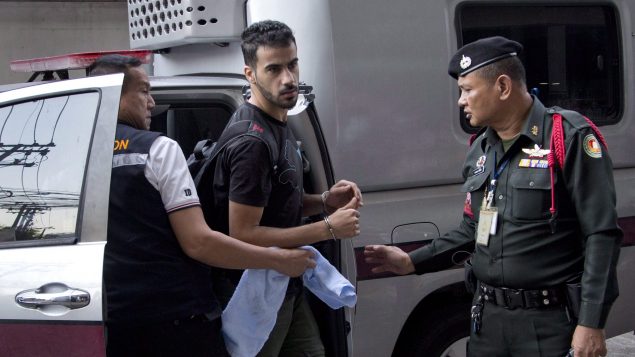 Bahraini football player Hakeem al-Araibi, center, is brought in to a court in Bangkok, Thailand, Tuesday, Dec. 11, 2018. A Thai court has ruled that the soccer player who holds refugee status in Australia can be held for 60 days pending the completion of an extradition request by Bahrain, the homeland he fled four years ago on account of alleged political persecution. (Gemunu Amarasinghe/AP Photo)

In a letter to Trudeau, al-Araibi’s wife pleaded with him to put pressure on the Thai authorities to release her husband.

“Time is running out, and I am pleading desperately to you as a humanitarian, and someone who would not hesitate to stand with justice, please, please help my husband,” The Guardian quoted from her letter.

“His refugee status relates to his persecution in Bahrain,” she wrote. “This in itself should be sufficient to showcase the inhumanity of extraditing him back to Bahrain, let alone the fact that it is illegal.”

According to Amnesty International, al-Araibi fled Bahrain in 2014 after he was convicted in “an unfair trial of vandalizing a police station, even though he was abroad and playing in a televised football match at the time.”

Since finding refuge in Australia, he has spoken out about human rights abuses in his home country, including the torture he suffered in detention, Amnesty International said.

Claire Mallinson, national director of Amnesty International Australia, said official extradition papers being submitted over the weekend show that Bahrain are ramping up their efforts to extradite al-Araibi despite ongoing global condemnation.

“If the extradition request is successful Thailand is potentially sending Hakeem to torture or death,” Mallinson said in a statement. “That cannot happen.” 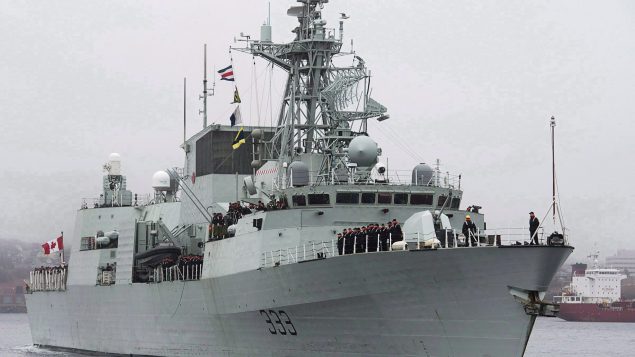 However, while after last summer’s diplomatic row with Riyadh, Ottawa seemed eager to thumb its nose at Saudi Arabia by granting asylum to al-Qunun and sending Foreign Affairs Minister Chrystia Freeland to personally greet her at the airport, Canada has close military ties with Bahrain.

Nearly 40 Canadian Armed Forces (CAF) personnel are currently deployed to Manama, Bahrain as part of the Canadian contingent of Combined Task Force (CTF) 150, according to the Department of National Defence.

In fact, the Canadian military is taking a lead role in CTF 150, which is part of the U.S.-led Combined Maritime Forces. Commodore Darren Garnier from the Royal Canadian Navy is leading the task force, which comprises 33 nations.

In addition, there up to a dozen CAF personnel deployed in Bahrain as part of Operation FOUNDATION, serving as staff in a variety of U.S. headquarters in the country. Canada’s military presence in the region goes back to Operation APOLLO launched in October of 2001 in the aftermath of the 9/11 attacks in the United States.

This ensures that cases are properly reviewed and that applicants are being resettled in the country that best suits their circumstance, Genest said in an email to Radio Canada International.

“The selection of refugees is based on vulnerability, to ensure that we are protecting the people who need it the most,” Genest said.

“From time to time, the UNHCR approaches Canada with an individual in need of urgent protection. These cases are processed on a case by case basis through the Urgent Protection Program, based on the recommendations of the referral organization.”

In the meantime, Amnesty International is also pushing Australia’s Prime Minister Scott Morrison to step his pressure campaign with his Thai counterpart.

“Australia has a long-standing positive relationship with Thailand, with important trade relationships, and more than half a million Australian tourists visiting Thailand every year,” Mallinson said. “It is imperative that the Prime Minister now takes a stand for Hakeem and sends a message to Thailand and Bahrain that detaining an Australian resident, and a recognised refugee is wrong.”