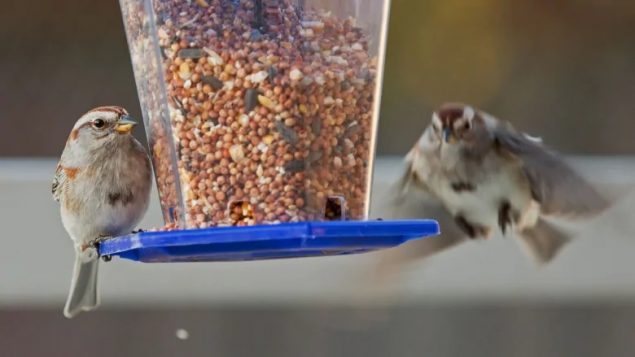 We love to see birds coming to backyard feeders, but its not all good news for the birds (Yvon Theriault-via CBC.)

Feeding birds in winter: both a good and bad idea

Winter is a tough time for most animals, birds included. Humans have long enjoyed helping out by providing food in birdfeeders.

But for many years now, scientists and other researcher have been saying that’s both good and not so good for our feathered friends.

On the upside, the feeders provide a valuable energy source in a time when food might be scarce.

On the downside, the feeders can expose them to at least two mortal dangers. One of them is from housecats who can attack birds feeding on the ground for seeds spilled from the feeder.

Another concern is location of the feeders. University of Alberta professor Erin Bayne of the Faculty of Science says they should be placed either several metres away from windows, or right up close but angled away from windows. They should not be placed in such a way that the bird perceives a flight path through the house because of front and back windows. Windows can also reflect the “outdoors” fooling birds into flying into them as well. According to a study in 2015 led by Bayne over 900,000 birds die each year in Alberta alone from flying into glass.

There were also warnings in recent years about feeders being a source for spreading a deadly infection among birds. Infected birds can visit the feeder and leave bacteria that can be picked up and spread among others visiting the feeders. 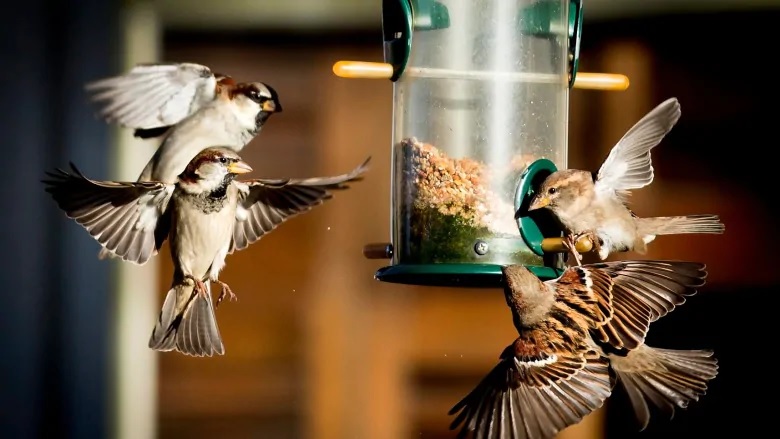 While providing valuable food in winter times of scarcity, a bird with an avian virus can also leave bacteria that can infect others and spread the disease more widely.( Colin Mulvany-AP-The Spokesman-Review via CBC)

Another concern is that by feeding birds we may change migration habits which may result in as yet not fully understood consequences.

A German study in 2009 showed there were not only migratory, but physical changes in two groups of a single population of European blackcaps since 1959. One group flies a shorter winter migratory route to the UK, while the other takes a longer southerly route to Spain. The changes in both migratory routes and physical changes seems to be the result of birdfeeding in northwestern Europe, while the longer southern route birds rely on more natural sources like fruits. The northern route birds have developed physical differences to wing shape and beaks.

As an aspect of this issue is a meeting this month in the Rocky Mountain resort town of Banff, Alberta where the town council is debating whether to ban bird feeders.

Its part of an overall plan to limit human/animal interactions and the argument is that the feeders are an unnatural attractant to wildlife to come into town.