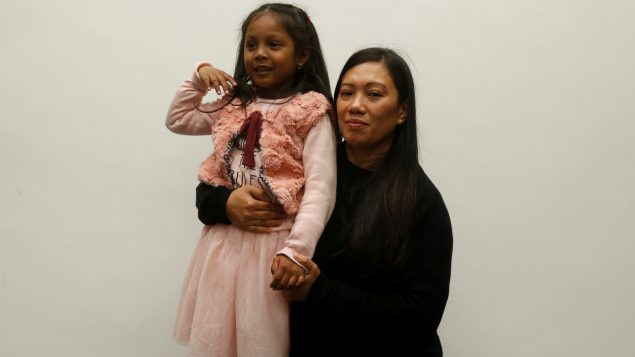 Vanessa Mae Bondalian Rodel and daughter Kellapatha Sanuthi Keana Nihinsa pose after a news conference in Hong Kong, China Feb. 23, 2017. They are one of three families who helped shelter former U.S. National Security Agency contractor Edward Snowden in Hong Kong in 2013 after his mass leak of information about surveillance programs. Rodel, now 42, and her daughter, 7, have been granted asylum by Canada. (Bobby Yip/REUTERS)

Canada grants asylum to one of Edward Snowden’s ‘angels’

A Filipino woman and her daughter who sheltered U.S. whistleblower Edward Snowden while he went into hiding in Hong Kong in 2013 boarded a plane to Toronto Monday after Canada granted them asylum, according to a charity that sponsored the pair.

Ethan Cox, a spokesperson for the Montreal-based non-profit For the Refugees, said Vanessa Mae Rodel, 42, an asylum seeker from the Philippines, and her 7-year-old daughter, Keana Nihinsa, are expected to land at Toronto’s Pearson International Airport around 6 pm (2200 UTC) Monday.

“Vanessa and Keana are coming to Canada as privately sponsored refugees, sponsored by our non-profit, For the Refugees,” Cox said.

They will then make their way to Montreal where they will be settled with help from For the Refugees.

The charity was set up in 2016 by a group of lawyers in Montreal to support three refugee families also known as “Snowden’s angels,” Cox said.

Rodel and five other asylum seekers sheltered Snowden, at the request of their Canadian-born immigration lawyer Robert Tibbo.

The former National Security Agency contractor retained Tibbo after he revealed his identity as the whistleblower who exposed the U.S. government’s Prism surveillance program.

Snowden, who at that point had become the most-wanted man for U.S. security services, lived with refugee families from the Philippines and Sri Lanka for about two weeks in Hong Kong slums until he was whisked away to Moscow. 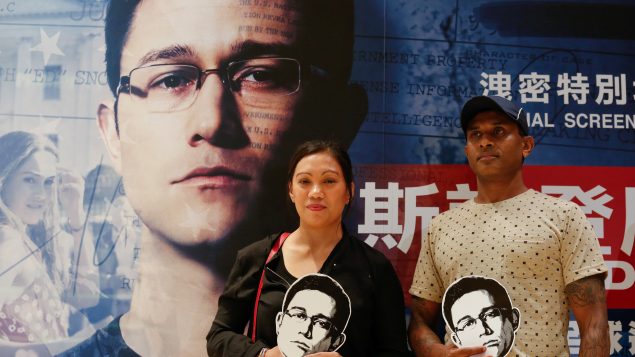 Asylum seekers Vanessa Mae Bondalian Rodel, 42, from the Philippines, and Ajith Pushpakumara, 44, from Sri Lanka, who helped hiding Edward Snowden while he was in Hong Kong in 2013, attend a special screening of the film “Snowden” directed by Oliver Stone, in Hong Kong, China, Sept. 30, 2016. (Bobby Yip/REUTERS)

Their role in helping the wistleblower escape capture was featured in Oliver Stone’s 2016 biographical thriller “Snowden,” exposing them to retaliation from the Hong Kong government.

Hong Kong authorities retaliated against the refugees for their role in the Snowden drama, cutting off support payment to them years ago, Cox said.

“The only reason they’re still alive is because our non-profit has been raising money and sending it to them every month to live on,” Cox said.

“There have been reports of agents from the Sri Lankan government coming to Hong Kong, looking for some of these refugees. They have been brought in and interrogated about their role with Edward Snowden by Hong Kong authorities.”

They are in a situation of extreme distress, he added.

“It’s tremendous that the Canadian government has finally brought in Vanessa and Keana and we’re very happy about that and thankful to the Trudeau government for that,” Cox said. “But we also need them to expedite the processing to get the other vulnerable refugees out of a dangerous situation.”

It is exactly this type of situation that is envisaged in the law, allowing Canada’s Immigration Minister Ahmed Hussen to step in and expedite the processing of their applications, he added.

“They have suffered a lot for many years and they need to be brought to Canada as soon as possible,” Cox said.

“We trust the professionals who work on various files to make the right decisions,” Trudeau said, speaking to reporters in Maple Ridge, British Columbia.

“Ambassador Lighthizer did not raise the issue,” Freeland said.

Decisions with respect to refugees are not made as part of a political process, she added.

“It’s not about geopolitical relations, these are decisions that are made based on facts,” Freeland said.