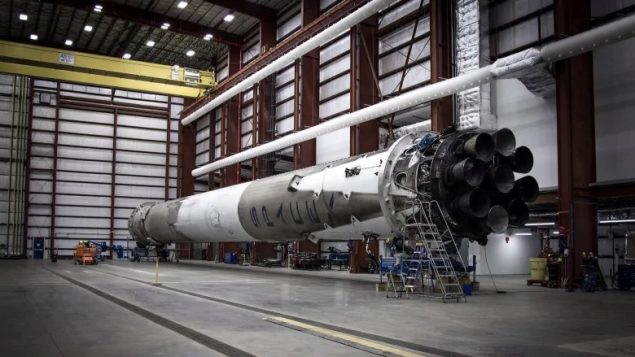 A used Falcon 9 first-stage rocket booster, in a hangar at Cape Canaveral, Fla., in 2016. A more modern version of this booster failed to touch down on land Dec. 5, 2018, delaying its re-use for the launch of a Canadian satellite system. Canadian officials are confident of a May launching. (SpaceX/Associated Press)

Space officials confident of a major satellite launch in May

Canada’s $1-billion space satellite system–an idea hatched in 2004 and green-lit in 2008–appears finally ready to blast off in May.

In February–for the sixth time–the launch was scrubbed because of technical problems with the SpaceX Falcon 9 booster rocket that will take the three-satellite surveillance package into space.

The SpaceX Falcon 9 rocket was selected to launch the Radarsat Constellation Mission or RCM, in 2013.

SpaceX is owned and operated by internet entrepreneur Elon Musk.

Canada’s space agency says it still has confidence in the SpaceX Falcon 9.

However, that assessment was made before the the U.S. Department of Defence announced in February it had started an investigation into whether the U.S. Air Force properly certified SpaceX’s Falcon rockets for national security launches. 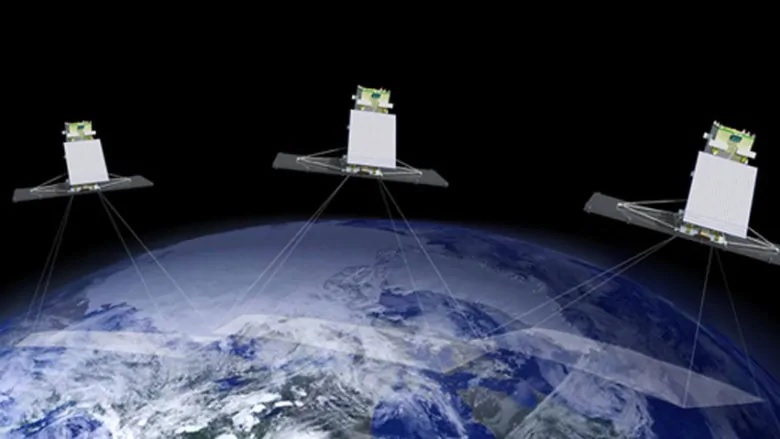 Canada’s $1-billion RADARSAT Constellation Mission, which will use three satellites to monitor the Earth, has been hit with launch delays and a technical glitch. (CBC)

Few other details have been made available and it remains unclear whether the Pentagon investigation will cause a delay for the launch of the Canadian satellites.

“The use of a SpaceX Falcon 9 launcher meets the reliability and security requirements set out by the Government of Canada for RCM,” Canadian Space Agency spokesperson Audrey Barbier told Postmedia News.

Everyone is treading lightly since a launch failure–though considered a low possibility–would set the project back four years, the time it would take to rebuild the radarsat satellites.

The Canadian project ran into some bad luck last in December when a Falcon 9 first stage rocket booster successfully launched an unmanned cargo capsule bound for the International Space Station but failed to make a soft upright landing on the ground in Florida.

That rocket was to be used to launch Canada’s package from Vandenberg Air Force Base in California. in February.

Since the first mission in June 2010, rockets from the Falcon 9 family have been launched 70 times, with 68 full mission successes, one partial failure and one total loss of spacecraft.

In addition, one rocket and its payload were destroyed on the launch pad in the fuelling process before a static fire test.

With files from CBC, Postmedia, CP