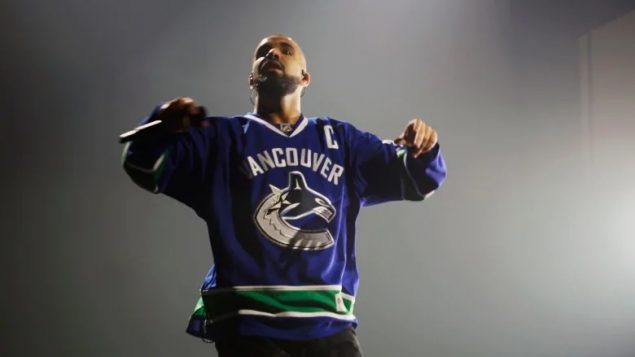 Drake in 2016 wearing a Vancouver Canucks hockey sweater. Drake is a big sports fan and has been on tour in the UK and Europe posing with soccer players, whose teams then lose their next match.(Lien Yeung-CBC)

Canadian rap star Drake is a big sports fan. As an international star, many sports teams and players like to have the added publicity of photos taken with him, or have him wear team merchandise like jerseys or caps.

It might seem like fun and cool, but sports teams are finding that actually seems to be bad luck.

People are noticing that every time Drake is pictured with a player or wearing team colours, that team loses its next game, and often badly.

It happens in basketball, North American football, soccer, mixed martial arts fighters, tennis you name it,  Drake supports the team or person in some manner…and they lose.

Now an Italian soccer team has banned players from posing with the rapper. Drake is on tour in Europe and the UK and has been posing with a number of football players. Many fans are now wishing he hadn’t

A player with the Paris-Saint Germain soccer team posed with Drake just last week and they lost the next game last Sunday, and lost badly with Lille beating them 5-1, their worst loss in years. 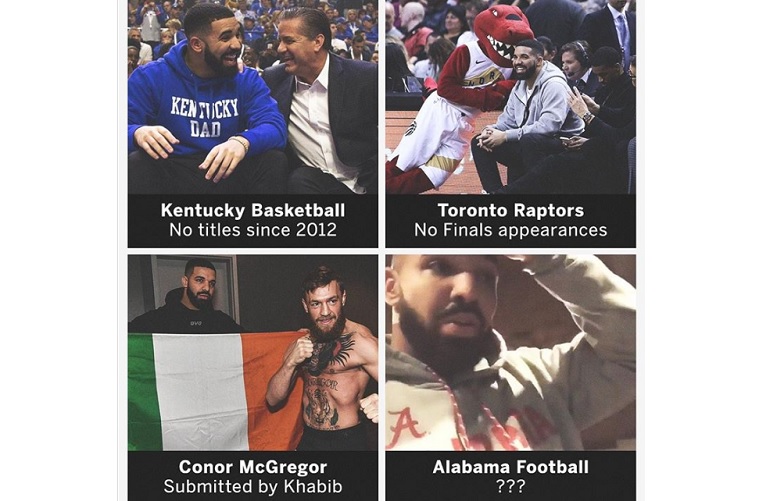 A tweet on ESPN noted the Drake”curse” in January. Later MMC fighter Conor McGregor hung out with Drake and lost his next high profile fight, same story for fighter Max Holloway who saw his 6-month, 13 fight winning streak end after Drake named him in a song. Drake also posed with an Alabama sweater in a video before the team was hammered by Clemson in its US college championship match 44-16, its worst loss in 20 years. (ESPN-Twtter

A couple of weeks ago an Arsenal player had a photo taken with the Canadian hiphop star…and suffered an upset loss in their very next game to Everton.

It was the same story for Paul Dogba of Manchester United. A photo together saw Man U last to the Wolves 2-1 in the FA Cup.

Man City’s Sergio Aguero and Drake also posed together after a Drake performance and then missed a penalty shot resulting in a 1-0 loss to Tottenham in the Champions League quarterfinal.

Now the AS Roma club has (only slightly tongue-in-cheek) has banned its players from straying too close to Drake, and said “no photos ” with the star until the end of the season.

Given the wide coverage the “curse” is now getting, perhaps AS Roma may not be the last to admire the Canadian star…from a distance.