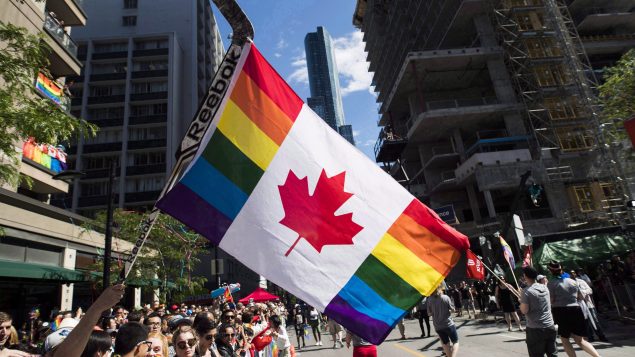 A man holds a flag on a hockey stick during the Pride parade in Toronto on June 25, 2017. The Royal Canadian Mint will be issuing a new $1 coin to commemorate 50 years since the partial decriminalization of homosexuality. (Mark Blinch/THE CANADIAN PRESS)

Plans by the federal government to mint a new dollar coin designed to commemorate 50 years of homosexual rights in Canada have sparked a backlash both from proponents of LGBTQ rights and social conservative groups, CBC News reports.

The new dollar coin, known in the Canadian slang as the “loonie” for the image of a loon duck usually depicted on it, is expected to be launched April 23 at an invitation-only event in Toronto.

According to CBC News, the new coin will feature a stylized depiction of two overlapping human faces within a large circle, the dates 1969 and 2019, and the word “equality” in English and French.

In 1969, after two years of heated debates, the House of Commons passed legislation that essentially decriminalized homosexual acts between consenting adults.

When introducing the legislation at the time, Liberal justice minister soon to become prime minister, Pierre Elliot Trudeau, the father of current Prime Minister Justin Trudeau, famously stated “that there’s no place for the state in the bedrooms of the nation.”

However, York University historian Tom Hooper told CBC news the coin commemorates a “myth,” since despite the sweeping changes to the Criminal Code introduced in 1969, police and courts continued to criminalize same-sex relations afterward.

“He’s saying we as a country, and we as Canadian citizens, are not only saying we approve of homosexual behaviour and lifestyle, but we want to have every citizen have it on their coinage. It’s going to be celebrated, going to be promoted and many Canadians find that very disturbing and even offensive.”

Based on reporting by the CBC’s Kathleen Harris