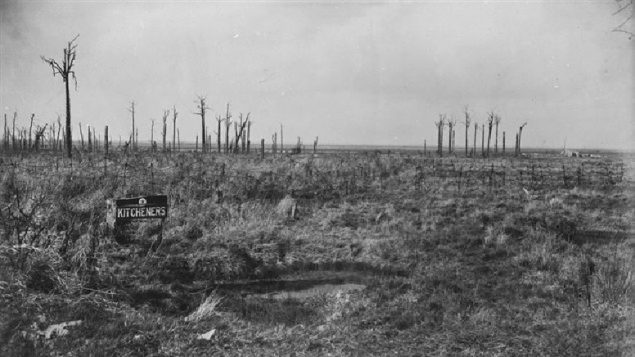 By April 1915, the First World War already had months of grinding deadly stalemate already behind it.

Canadians, relatively fresh on the scene. had been moved into an allied bulge into the German lines called the Ypres Salient.

On April 22nd, they were subjected to a deadly world’s first, a new and illegal weapon, poison gas.

Following a massive artillery barrage, the Germans had released some 160 tonnes of sickly greyish-yellow chlorine gas which floated slowly over to French and Canadian lines. The French-Algerian division took most of the gas on the left, and as it sank into their trenches were forced out into machine gun fired and then broke and ran coughing and choking and leaving a huge gap in the line of about 6 kilometres. 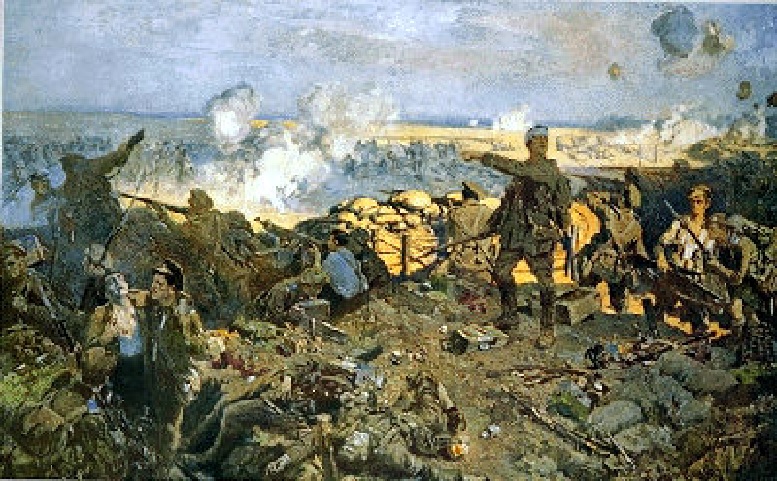 In the face of this horrific new weapon, Canadians covering their faces with urine soaked rags, sick and almost blinded by gas, held the line and stop the Germans from getting around and behind them and British divisions on their right.

Though this was their first real experience in war, the Canadians many coughing and gasping for air fought off the German infantry advance, while efforts were made to at least partially close the gap. The next day, with Germans having moved in the former French-held area, Canadians even made counter-attacks into the German positions at Kitchener’s Wood, the shattered remains of an oak forest near St Julien. The cost was high, but it kept the Germans frustrated and unable to carry out their full plan of eliminating the salient entirely, (though later after the battles, the British would pull back to shorten the Allied lines)

Then on the 24th, the Germans decided to directly attack this new group of Allied soldiers, these bloody Canadians who had stymied them.

Again preceded by a massive artillery barrage and another deadly gas attack the German army again advanced against the  badly weakened Canadians, hoping to finish them and break through the Allied lines eliminate the salient and advance their own lines.

But the Canadians, who had been store clerks, farmers, lumber jacks, bankers, and university students only months before, held their position.

They held against the horrific ground shaking barrage with its white-hot shrapnel tearing through the line, and held against more of the deadly gas and against the withering fire from the German Maxim guns.

The cost was high with some 6,000 Canadians killed, wounded, or burned by gas, but the German attack failed and was repulsed

Citation for Cpt: Francis A. C. Scrimger of Montreal “On the afternoon of 25th April, 1915, in the neighbourhood of Ypres, when in charge of an advanced dressing station in some farm buildings, which were being heavily shelled by the enemy, he directed under heavy fire the removal of the wounded, and he himself carried a severely wounded Officer out of a stable in search of a place of greater safety. When he was unable alone to carry this Officer further, he remained with him under fire till help could be obtained. During the very heavy fighting between 22nd and 25th April, Captain Scrimger displayed continuously day and night the greatest devotion to his duty among the wounded at the front.”London Gazette, no.29202, 23 June 1915

The Canadians in their first major appearance in the war, came in as an unknown, untried, untested force, but had immediately established themselves as a true fighting army equal to any and one to be reckoned with.

Their heroism and courage would be repeated many times over in victories in the next months and years at Vimy, Hill 70, Canal du Nord,  Passchendaele, Amiens, and more.  By war’s end they were considered by all to be the best of the Allied forces. This led to “Canada’s 100 days” in 1918 in which they were used as the shock troops leading the battles and winning every one until the Armistice in November, 1918.