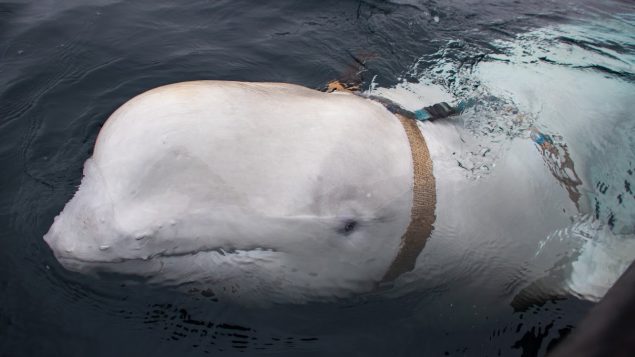 A beluga whale seen as it swims next to a fishing boat before Norwegian fishermen removed the tight harness, swimming off the northern Norwegian coast Friday, Apr. 26, 2019. (Joergen Ree Wiig/Norwegian Direcorate of Fisheries)

A whale sanctuary in Iceland will not be able to provide safe haven to a lonely beluga whale freed last week from a mysterious harness by Norwegian fishermen and fisheries officials in the waters off Norway’s northernmost coastline, says the charity that runs the sanctuary.

The affable cetacean that has garnered international headlines amid intense speculation in the Western media that it might have escaped from a secret Russian military facility, where it was allegedly trained to spy on NATO warships, is not in a hurry to leave the friendly Norwegian waters and even paid a visit to the town of Hammerfest on Thursday.

Joergen Ree Wiig, an official with the Norwegian Directorate of Fisheries, who was instrumental in getting the whale freed from the harness last Friday, said there are concerns about the well-being of the animal, which actively seeks out human contact and even allows people to pet its nose.

Ree Wiig told Radio Canada International that some people have even suggested that for its own safety the whale needs to be captured and moved to a specialized beluga whale sanctuary in Iceland operated by Sea Life Trust, a British environmental organization dedicated to the protection of marine wildlife.

No room for a third beluga whale

The Sea Life Trust Beluga Whale Sanctuary in Iceland’s Westman Islands specializes in rehabilitation of captive whales but officials there said they have their hands full with preparing for the arrival of two captive whales rescued from a tank in China.

“Moving any belugas to this sanctuary (or any sanctuary) is a very complex exercise, and needs to be carefully considered, planned and executed so that the well-being of any individual whale is not compromised,” Sea Life Trust said in an emailed statement to Radio Canada International.

“This is what we are currently doing with Little Grey and Little White, the sanctuary’s first residents due to arrive in the next few months.”

Little Grey and Little White are 12-year-old female beluga whales, who were taken into captivity at a young age to perform at Shanghai’s Changfeng Ocean World Zoo.

“This is the first time anyone has attempted this and as such, our focus is very much on their welfare and settling them in to their new, natural home,” the statement said. “Adding any other whales at this very delicate stage is something that could compromise their welfare.” 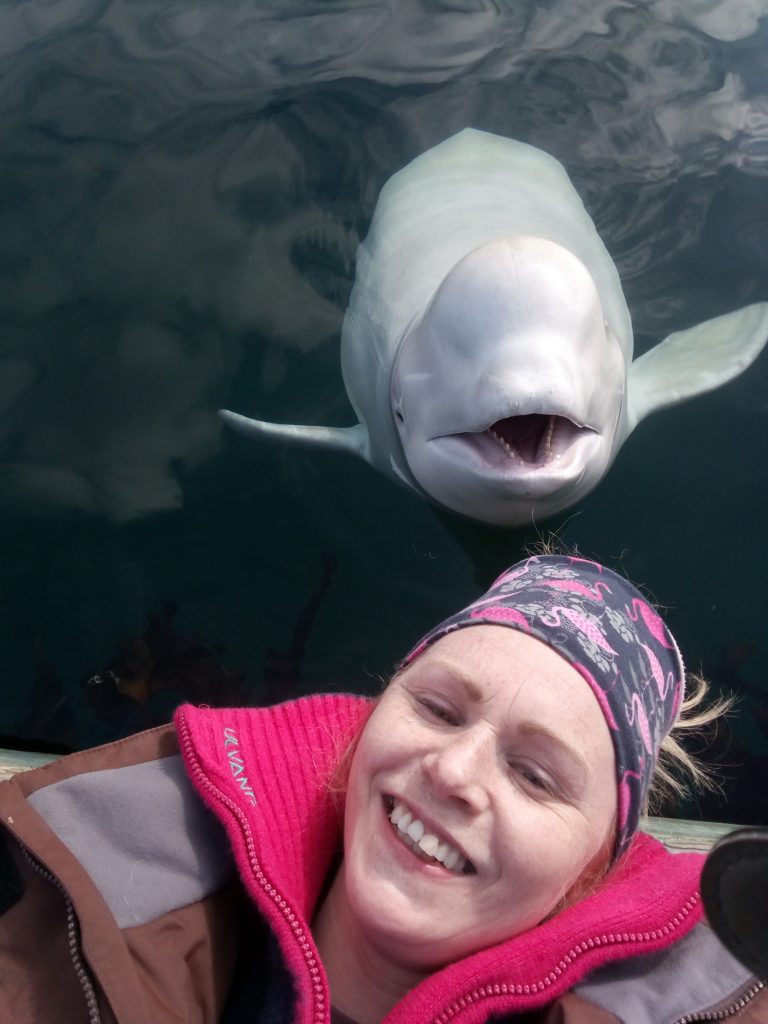 In this photo taken on Monday, Apr. 29, 2019, Linn Saether poses with a beluga whale, days after a fisherman removed a harness with a mount for camera from the mammal, in Tufjord, Norway. The white whale has been frolicking in the frigid harbor of Tufjord, a hamlet near Norway’s northernmost point, and has become a local attraction. (Linn Saether via AP)

In the meantime, the beluga whale freed from the mysterious harness continues to delight locals and generate intense online debates over its origin.

While much of the Western media has focused on speculation that the whale is a Russian “spy” based on the fact that one of the plastic buckles on its harness had the words “Equipment St. Petersburg” imprinted on it, Russian experts have pointed out that the writing on the buckle is in English and it could refer to the city of St. Petersburg, in the U.S. state of Florida.

Russian experts also point out that during the Cold War the U.S. Navy is known to have conducted experiments on using marine mammals such as dolphins and sea lions for intelligence and security purposes.

And they argue the U.S. military has as many reasons to snoop around the Kola Peninsula, which houses Russia’s Northern Fleet, as Russia would have to spy on NATO warships in the waters of the Norwegian and Barents seas.