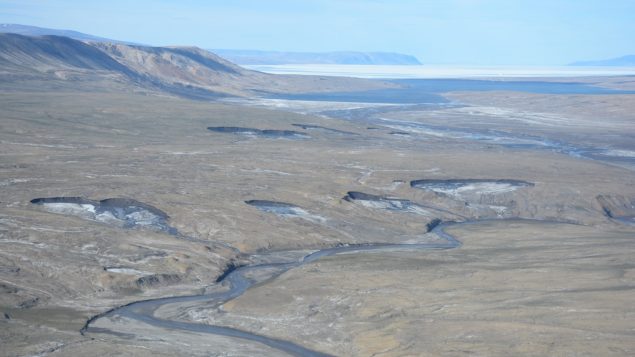 Over the past few years, due to higher summer temperatures, scientists have seen an increase in landforms that are caused by melting ice in the permafrost. (Melissa Ward Jones/McGill University)

Polar deserts in Canada’s High Arctic are undergoing rapid changes as increases in summer air temperatures lead to permafrost thaw, leaving giant horseshoe-shaped pockmarks on the barren terrain, according to a new study.

The research focuses on these horseshoe-shaped landforms, also known as thaw slumps, that develop when the ice within the permafrost melts and the land slips down.

While thaw slumps are very common in the lower Arctic latitudes, researchers had assumed the High Canadian Arctic, where average annual ground and air temperatures are -16.5 C and -19.7 C, respectively and the permafrost is over 500 metres deep, would be more immune to the effects of warmer temperatures, said Melissa Ward Jones, the study’s lead author and a PhD candidate in McGill’s Department of Geography.

“But what my study is showing is that, no, these places aren’t immune to climate change.”

(click to listen to the interview with Melissa Ward Jones) 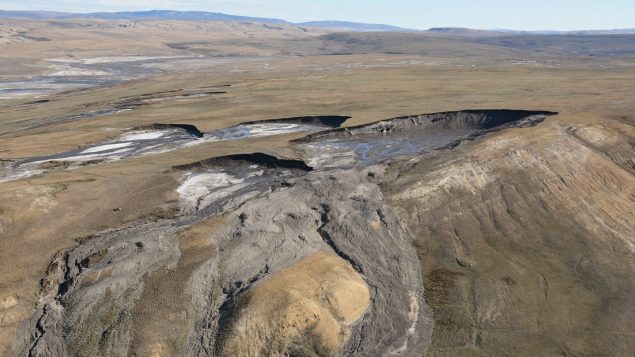 Scientists had not expected to see the spread of these landforms, known as retrogressive thaw slumps, in the high Arctic because of the extremely cold ground and air temperatures. (Melissa Ward Jones/McGill University)

Even a slight increase in summer temperatures is enough to trigger a bigger permafrost thaw, she said.

Despite short Arctic summers, the thaw season, which lasts for just 3-6 weeks a year, leads to the development and expansion of slumps, which could have major implications for northern infrastructure, Ward Jones said.

“I think it’s a wakeup call that change is happening in these areas that are really far north,” Ward Jones said.

There has been a widespread development of retrogressive thaw slumps in high Arctic polar deserts over a short period, particularly during the unusually warm summers of 2011, 2012 and 2015, the research shows.

“When we see these widespread increases, these large jumps in numbers going from 100 active slumps to over 200 active slumps, that means something is going on bigger regional scale, so we’re linking this with increases in summer temperatures,” Ward Jones said. 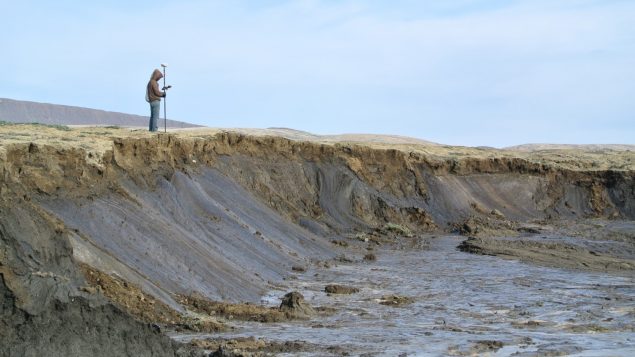 This happens because the terrain in Canada’s Arctic polar deserts has very little vegetation and organic cover to insulate it from increased summer temperatures, Ward Jones said.

“Where we are on Ellesmere Island permafrost is more in equilibrium with climate, so any increase in summer temperatures if you reach a new maximum summer temperatures, you’re going to have an increase in your thaw depth – the layer of soil at the surface that goes above zero every summer – and if you have ice-rich permafrost, which we do have in these areas, the ice within the permafrost is going to melt,” she said.

Wayne Pollard, a professor in McGill’s Department of Geography and co-author on the study, said their research clearly demonstrates the complex nature of ice-rich permafrost systems and climate-permafrost interaction.

“Furthermore, it raises concerns about the over simplification of some studies that generalize about the links between global warming and permafrost degradation,” Pollard said in a statement.