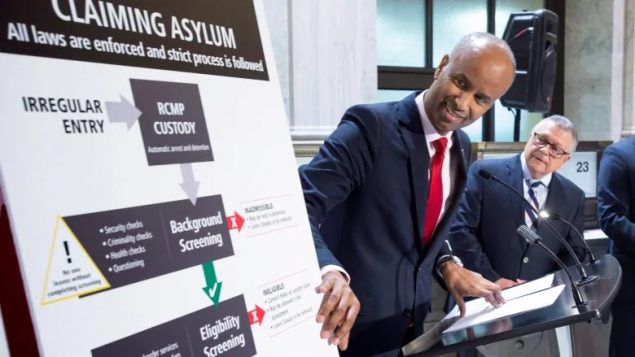 Immigration Minister Ahmed Hussen and Public Safety Minsiter Ralph Goodale were in Montreal in May 2018 to give an update on how the government is handling asylum seekers. The backlog to process asylum claims is at record levels along with waiting times. Minister Hussen is mentioned in the Canadian Press saying he is concerned about the changing attitude saying employers tell him they need workers and new immigrants are key to meeting shortages (Paul Chiasson/Canadian Press)

The waiting period to have a refugee claim heard in Canada is already long, with the claimed waiting period of a little under two years, although a five year wait is not unheard of.

Canada’s acting Auditor-General, Sylvain Ricard, says in a report this month that the waiting period is worse than it’s ever been. The report notes that government agencies involved in processing claims are unable to cope with asylum claim surges creating a massive backlog of about 75,000 cases.

The report suggests this will increase to an estimated 100,000 cases by 2021 according to the assessment. 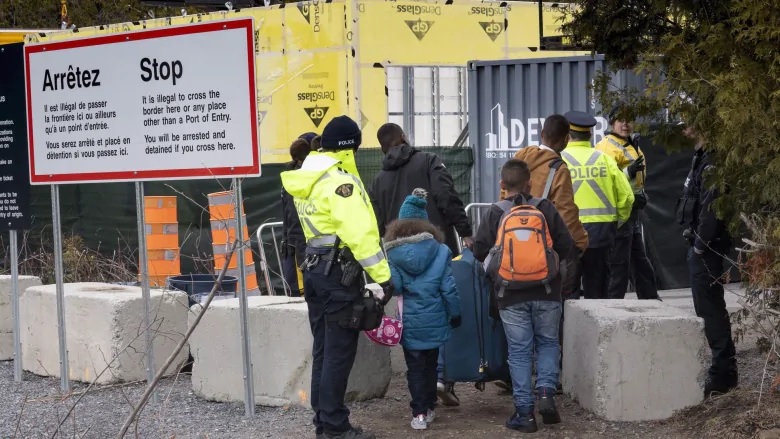 Asylum claimed spiked staring in 2017 as people walked across from the U.S into Canada at an illegal crossing point after a tweet from Prime Minister Trudeau in response to American change in policy regarding those living in the U.S under temporary protection ( Paul Chiasson- Canadian Press)

Officials from the Immigration and Refugee Board (IRB), the Canada Border Services Agency (CBSA) and Immigration, Refugees and Citizenship Canada (IRCC) appeared before a Parliamentary committee to answer questions about the Auditor-General’s assessment.

The Chairman of the IRB, Richard Wex, told the committee that even with funding increases the IRB goal is not to reduce the backlog, but rather ““It is to slow the growth of the pace of the backlog from what it would otherwise be”.

Canada began experiencing a flood of “irregular” border crossings and asylum claims coming from the U.S. after a tweet from Prime Minister Trudeau saying Canada welcomes those fleeing persecution.  The tweet was in response to proposed policy changes in the U.S including changes for those living in the U.S under temporary special.

One of the issues raised was that the three government agencies systems used to collect and share information about asylum claimants, are not entirely compatible.

This week as Canada’s federal political parties gear up for the fall general election, the opposition Conservative leader Andrew Scheer revealed some of his immigration platform saying a Conservative government would:

As for the current Liberal government, it has promised to add over $200 million to the IRB budget to enable the board to hire new staff and decision makers. It is hoped this will enable the IRB to process up to 50,000 claims a year and cut the wait times in half.  The Liberal government has also changed its stance somewhat on welcoming asylum claimants with new rules that would deny claims to those who have already made asylum claims in certain other countries.