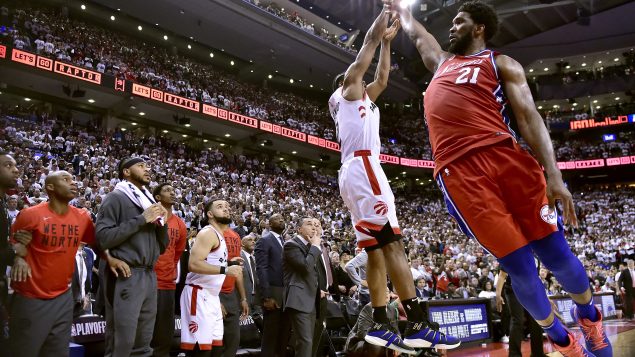 A local statistician gives the Toronto Raptors a 51 per cent chance of winning the NBA Finals over the Golden State Warriors. Philadelphia 76ers centre Joel Embiid (21) fails to stop Toronto Raptors forward Kawhi Leonard's (2) last-second basket during second half NBA Eastern Conference semifinal action in Toronto on Sunday, May 12, a shot that will now be counted as one of the greatest moments in Toronto sports history. (Frank Gunn/The Canadian Press)

Maybe it’s because no Canadian team has won a title in any of the big four North American professional sports (hockey, baseball, NFL football or basketball) in a very long time.

Those last winners–the Toronto Blue Jays and the Montreal Canadiens–were in 1993.

So that might explain why things things are getting just a little bit crazy in Toronto.

In a good way, of course. 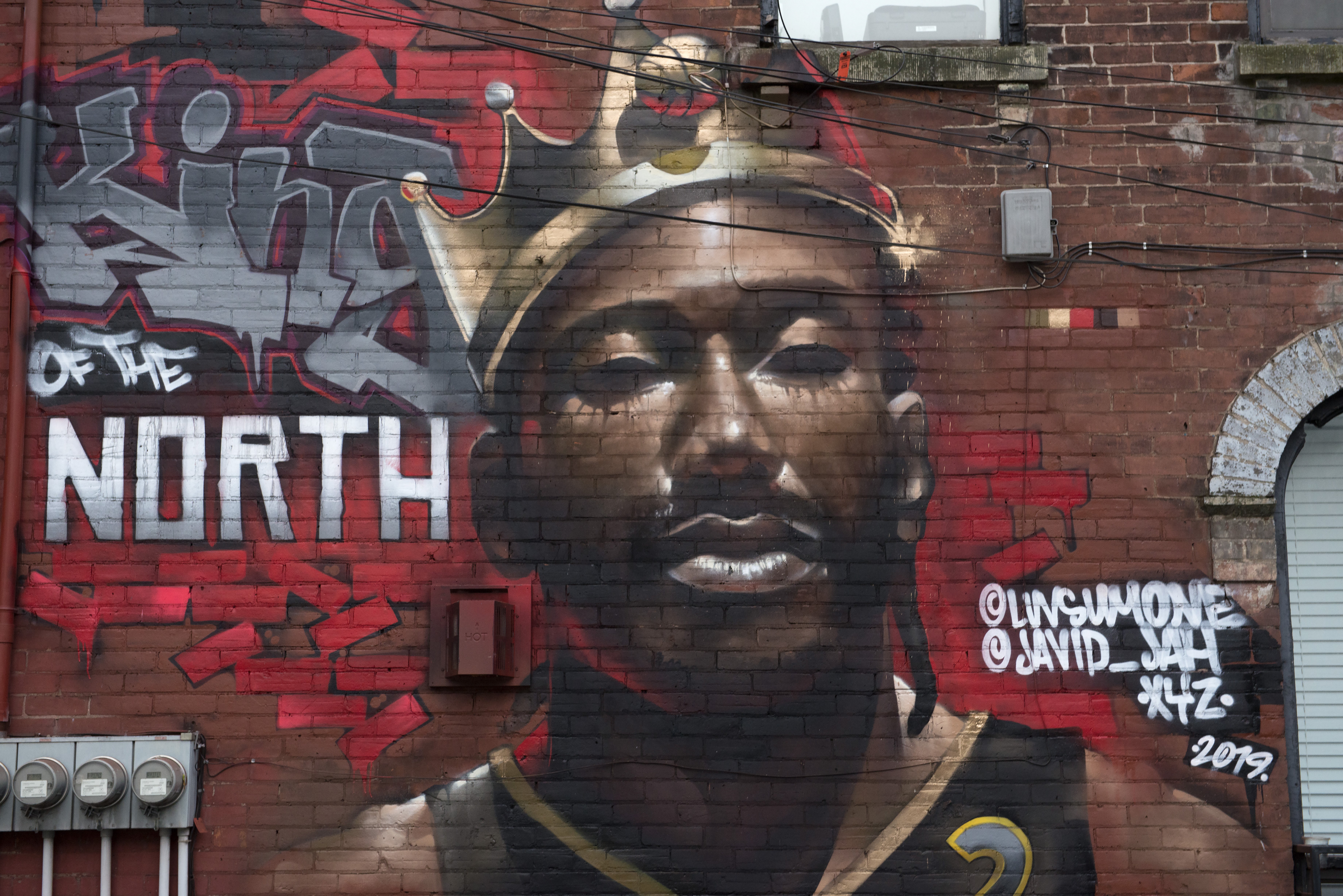 A mural painted on the side a brick building showing Toronto Raptors’ Kawhi Leonard is seen in Toronto on Monday. The Toronto Raptors might be one of the most unheralded teams to ever make the NBA Finals. (Doug Ives/The Canadian Press)

It is Toronto, after all.

And over what, exactly?

A basketball team, game and series.

The leadup has seen some fans jump atop a police car following an early-round victory and the NBA warning the Raptors’ most famous fan, the rap star Drake, to put a lid on it.

Actually, nobody should really be all that surprised that the game has struck a nerve. 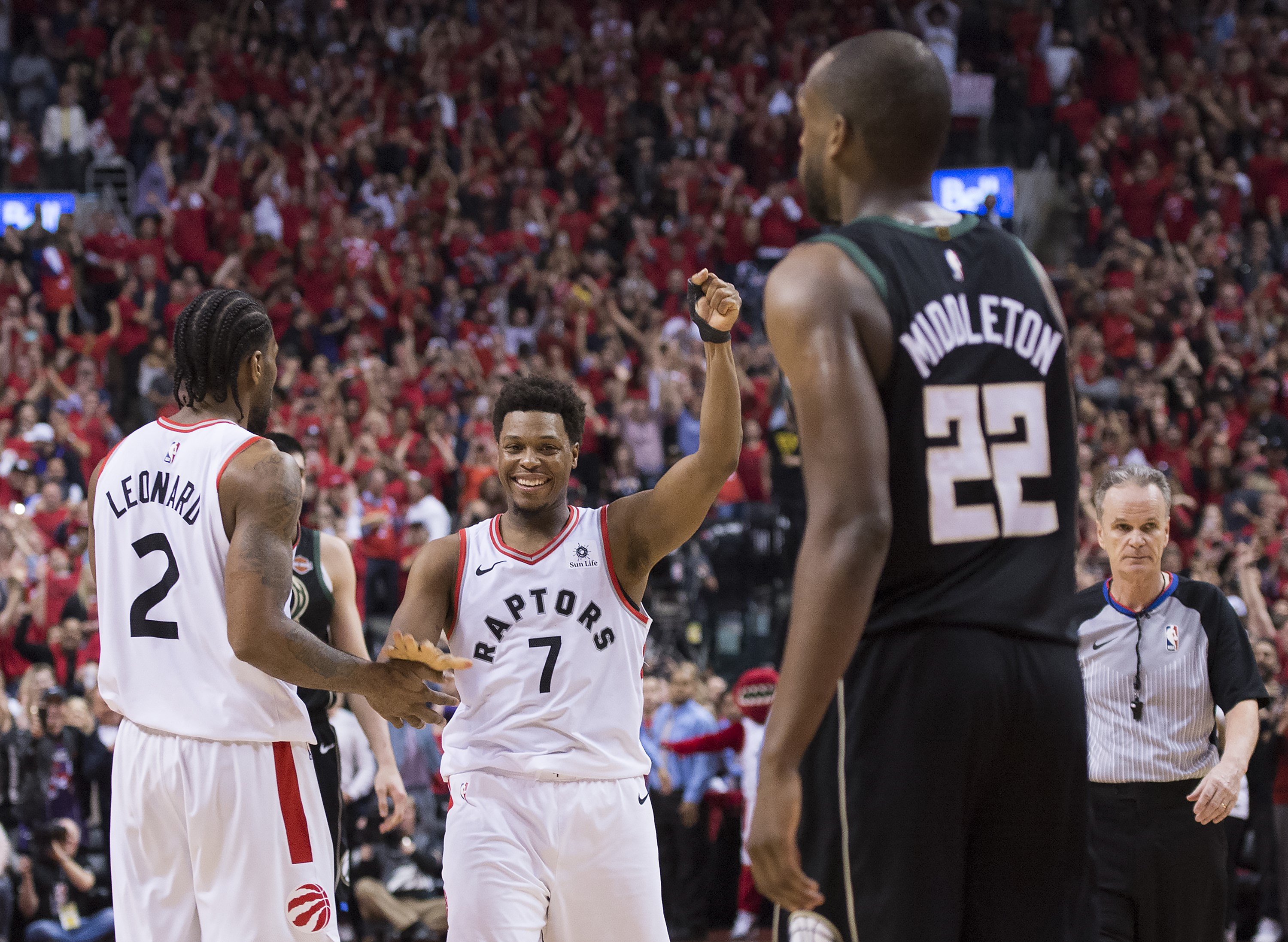 Toronto Raptors guard Kyle Lowry (7) reacts with Leonard (2) as Milwaukee Bucks forward Khris Middleton (22) looks on during the final seconds of the second half NBA Eastern Conference finals basketball action in Toronto last Saturday. If Lowry plays to top form, the Raptors could do well better than many expect. (Nathan Denette/The Canadian Press)

A closer look reveals that some of the best basketball players in the world are playing in scholastic and amateur leagues in Toronto.

Many will tell you basketball is the fastest growing sport in Canada.

And it is apparently is paying off for a lot of kids with dreams of glory.

Canada now has the most players not born in the United States in the NBA (13 at the start of the season).

And there is no shortage of star power and brilliance to stir the emotions in this series.

The Raptors are led by a brilliant Zen master of a player from California named Kawhi Leonard, possessor of an uncanny ability to bide is time until he is really needed to secure victory and then provide it (at least so far). 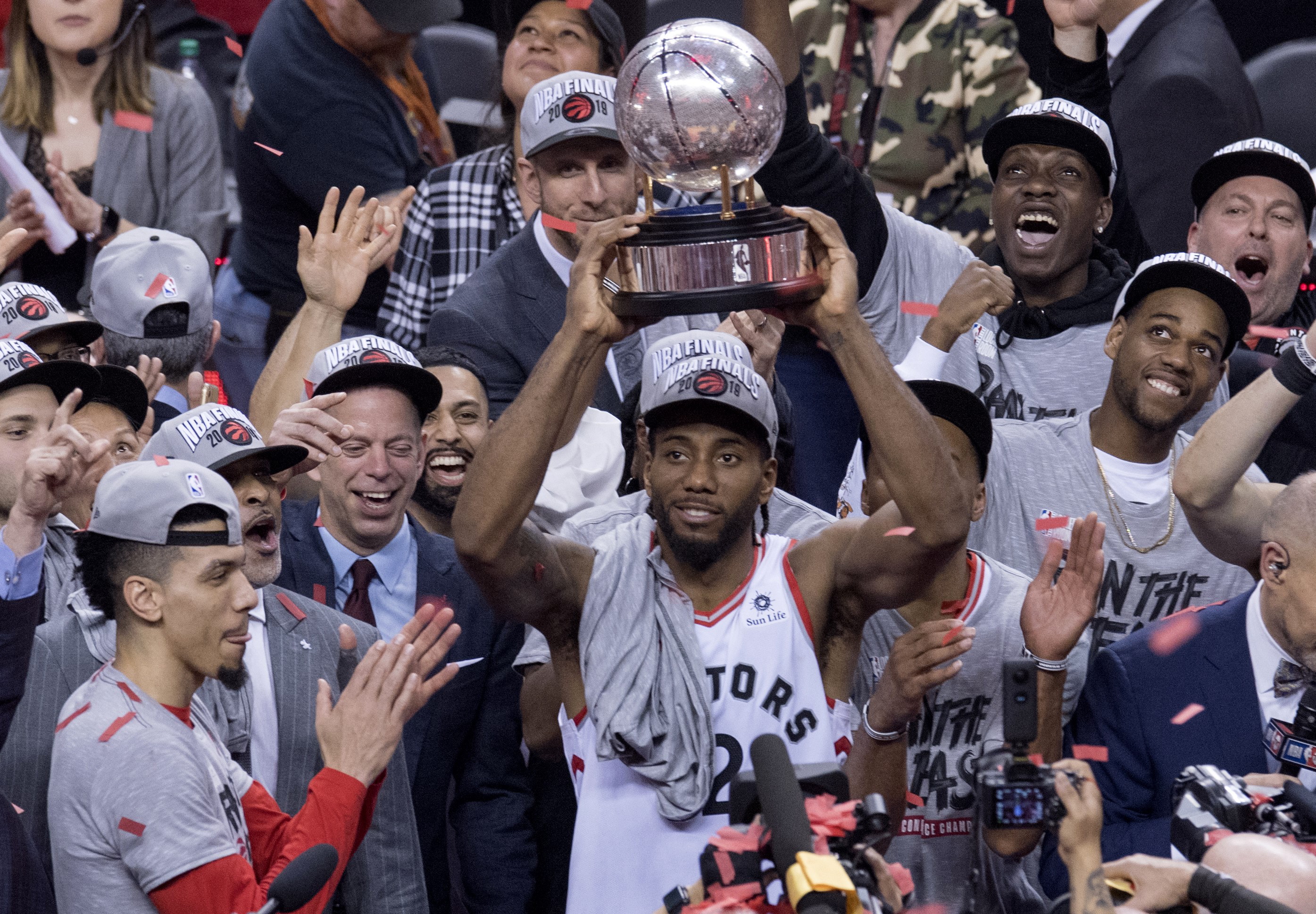 The Warriors are led by brilliant guard Steph Curry (who played briefly as a kid in Toronto), who has led the team to three titles in the last four years.

Should the Warriors win this series, there are few who would disagree that will have to be included in any future conversations about the greatest teams of all time.

But get this: the Raptors are slightly favoured. Very slighty–mainly, some would say, because they hold the homecourt advantage over the next seven games, an advantage, of course, that disappears should they lose tonight.

With any luck at all, this could get really, really good.

Heck, that’s why they play.

Looking for an omen?

The game of basketball was invented by a Canadian.