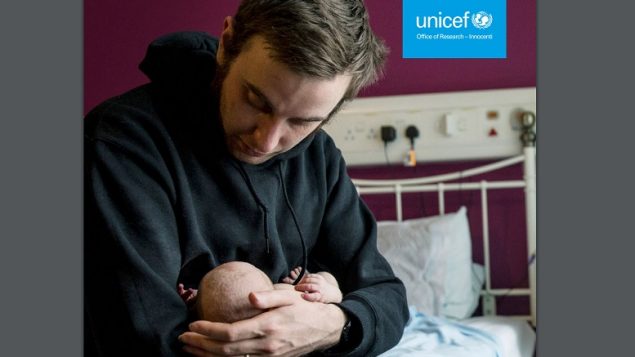 The cover of the new UNICEF report on how countries rank in terms of family friendly policies. Canada ends up somewhere in the middle of the group. (UNICEF)

Oh happy day, a new baby has just come into the family!

If you’re in some countries, the laws say you’ll get a significant amount of paid leave to spend with the newborn, along with other policies to help new parents and aid in the child’s early development.  A new UN report says some countries are good at this, others not so much.

The UNICEF report is called — Are the world’s richest countries family-friendly? Policy in the OECD and EU — ranks countries based on their national policies in four indicators:

Sweden, Norway and Iceland came out on top in that order. Greece and Switzerland came out at the bottom in 30th and 31st place.

Ten countries had insufficient data to be properly ranked, including Canada, Japan, the U.S, and Australia. Based on the information available, Canada would rank about in the middle of the whole group of 41.

The report noted that Canada and Chile offered generous paid leave to mothers, but little to no leave for new fathers.

The U.S was the only OECD country with no national paid parental leave. Japan offers generous paid leave to new fathers (30 weeks) but very few men take advantage of that.

In a UNICEF press release,  executive director Henrietta Fore noted ““There is no time more critical to children’s brain development—and therefore their futures—than the earliest years of life. We need governments to help provide parents with the support they need to create a nurturing environment for their young children.”

One of the recommendations is for at least six months of leave for all parents; safe and comfortable public and work-based places for women to breastfeed; and universal access to quality, affordable childcare from birth to children’s entry into the first grade of school.

The report is part of UNICEF’s first Parenting Month which began on June 1 this year and the organization’s Early Moments Matter campaign,  which is now in its third year. This initiative is advocating for families by calling for policies that provide all young children with the encouraging atmosphere and stimulating experiences needed for healthy brain development.