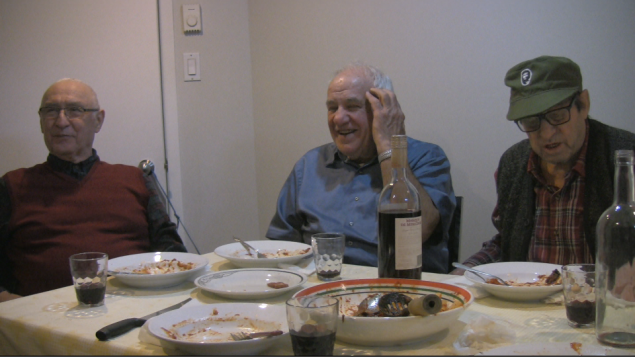 What do a chef, a union organizer and a butcher do when they get together in a bar?

While it sounds like the premise for a great joke, chef Giovanni Adamo, labour organizer Francesco di Feo and butcher Salvatore Martire are dead serious when they get together to discuss Italian and world politics, even as they enjoy a bit of Montreal dolce vita.

The trio of Montreal Italian retirees and their fervour for left-wing politics are the subject of the latest documentary by Montreal-based historian and screen writer Bruno Ramirez and his co-director Giovanni Princigalli.

Ramirez, who teaches U.S. history at the Université de Montréal and studies the history of Italian immigration to North America, says he got the idea of the film when Princigalli told him about the three gentlemen who would meet regularly at one of Montreal’s Italian cafés to discuss politics.

“That really struck me,” Ramirez said in a phone interview with Radio Canada International. “Because usually… Italian old men, retired, when they meet around bar they talk about other things: about football (soccer), about food, about gardening…”

(click to listen to the full interview with Bruno Ramirez)

Ramirez says he managed to meet them and saw that they were incredibly articulate.

“They had a very interesting experience to tell and so I thought I would do at first a short documentary, just of them discussing politics around the table, around dinner, drinking their own wine and then, the more I learned about them, about their trajectory in life… I decided that they deserved a little more than a short ten minutes documentary,” Ramirez said.

The result is an hour-long documentary that profiles the three Montreal octogenarians who settled in Canada in the 1950s and 1960s and were among the founders of local chapters of the Italian Communist Party, the Italian Socialist Party, as well as labour organisations.

Adamo, di Feo and Martire tell the story of their immigration, their struggles to settle in a new country and their involvement in Canadian and Quebec politics through images, personal documents and public archives.

Ramirez says they also speak about their concerns for their children and to the future of the Italian-Canadian community.