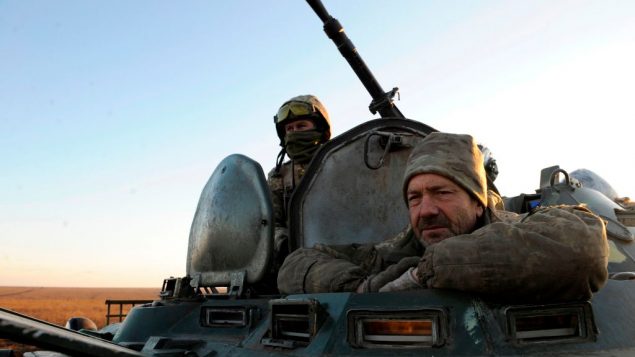 Ukraine needs to carry out deep structural reforms and develop a clear defence policy before it goes on a shopping spree for sophisticated Western and Canadian military equipment, says Defence Minister Harjit Sajjan.

The issue of Canadian Ukrainian military and defence industry cooperation was one the topics discussed by Prime Minister Justin Trudeau and President Volodymyr Zelenskiy when the two leaders met on the sidelines of the Ukraine Reform Conference in Toronto last week.

Canada will continue “to stand with Ukraine against Russian interference and aggression,” Trudeau said, adding that they discussed Canada’s mission in Ukraine to train the Ukrainian military as well as the sale of lethal weapons to Kyiv.

Trudeau said a Canadian company has already invested in an ammunition factory in Ukraine without providing additional details. 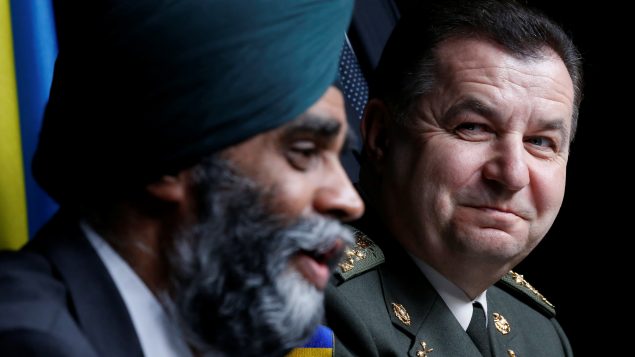 But speaking to Radio Canada International, Sajjan said before Ukraine and Canada deepen their defence cooperation further, Ukraine needs to figure out what kind of a military it wants.

Instead of focusing on immediate equipment needs, the Ukrainian government needs to invest its efforts in building its defence institutions, he said.

“I’ve been there and seen other nations’ donated equipment but they’re sitting in sea containers,” Sajjan said.

“If you go and have chunks of this and that, it doesn’t really work very well. What we’re trying to do while we’re there is helping them to come up with the appropriate plan.”

Michael Carpenter, managing director of the Penn Biden Center for Diplomacy and Global Engagement and a former high-ranking Pentagon official with responsibility for Russia, Ukraine and Eurasia, said Sajjan’s approach is “absolutely right.”

Ukraine needs to get serious about deep structural reforms to its defence institutions, Carpenter said. 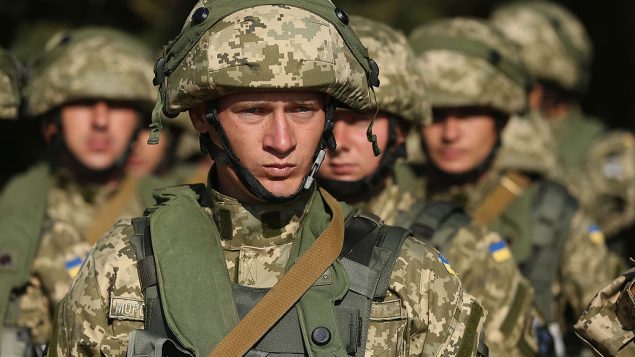 Ukrainian marines prepare to train in urban warfare techniques on the second day of the ‘Rapid Trident’ bilateral military exercises between the United States and Ukraine that include troops from a variety of NATO and non-NATO countries on September 16, 2014 near Yavorov, Ukraine. (Sean Gallup/Getty Images)

The Obama administration had spent a lot of effort to help Ukraine develop a roadmap for defence reform. The result was a document called the Strategic Defence Bulletin, Carpenter said.

“It’s a very comprehensive plan to make Ukraine’s military more capable and more NATO-interoperable,” Carpenter said. “But the real problem with that roadmap was that there was a lot of resistance amongst the senior members of the General Staff, who operated according to a much more Soviet logic.”

Carpenter said he hopes the new government will work to move aside these old Soviet-trained cadres and promote bright, Western-educated officers, who genuinely want to pursue reforms.

Once the new Ukrainian government is formed following parliamentary elections on July 21, they will decide the mission for their military and what kind of equipment they need, Sajjan said.

“And then from that we can look at progressing some of these conversations forward, but what we have done here is making sure that we are ready to be able to support the plan that they will create,” Sajjan said.

Having placed Ukraine on its list of countries allowed to buy Canadian military equipment and weapons and having signed a defence cooperation agreement with Kyiv, Ottawa has already created the legal foundation for eventual arms sales or defence technology transfers, Sajjan said. 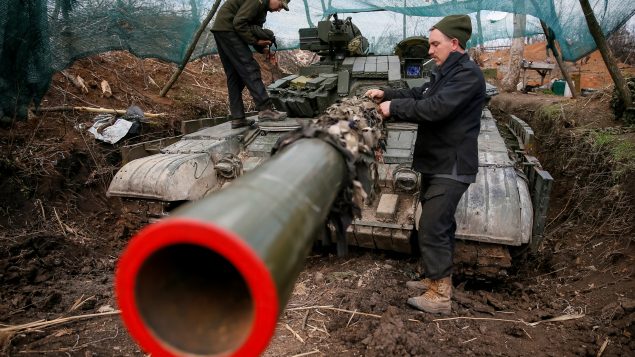 In fact, according to the Stockholm International Peace Research Institute, in 2018 Ukraine ranked as the world’s 12th largest arms exporter, well ahead of Canada, which ranked 23rd.

However, without sustained investment in research and development, Ukraine’s defence industry has fallen behind of not only Western but also the Russian military industrial complex with which it was closely intertwined prior to the 2014 crisis in Eastern Ukraine.

“The Russian military has modernized and reformed especially over the last ten years rather prodigiously and prolifically,” Carpenter said.

Ukraine needs capabilities that can match Russia’s new sophisticated weaponry to be able to defend itself, Carpenter said.

“For certain types of military equipment like anti-tank weapons, like air defence systems they really need to purchase or receive those systems from Western partners,” Carpenter said. 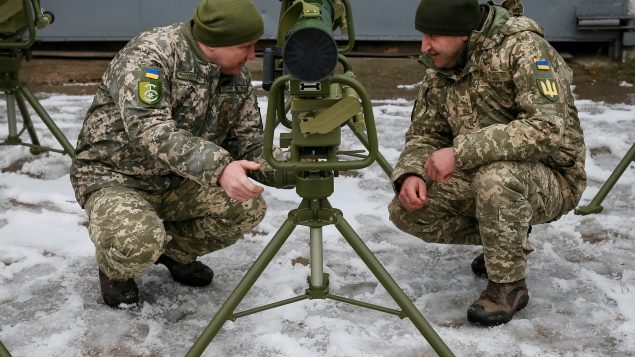 Participants take part a ceremony to hand over weapons and military vehicles to servicemen of the Ukrainian armed forces at the Kiev Armoured Plant in Kiev, Ukraine November 15, 2018. (Gleb Garanich/REUTERS)

But Western companies are feeling leery of investing in Ukraine because of the business climate rife with corruption and an opaque defence industry, dominated by a giant parastatal company, Ukroboronprom, comprising over 130 separate entities and more than 80,000 employees, Carpenter said.

This has been the prime impediment to Western defence companies setting up shop in Ukraine, he added. Until Ukroboronprom is thoroughly reformed, there is little chance of substantial Western investment in the Ukrainian defence industry, Carpenter said. 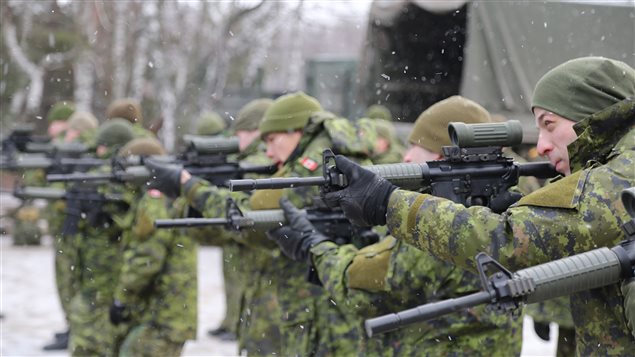 So far only a couple of small and medium Western arms manufacturers have shown interest in investing in Ukraine’s defence industry.

Colt Canada, an Ontario-based arms manufacturer that supplies the Canadian military and several police forces with small arms – assault rifles, machine guns and carbines – is one of those companies seriously looking at investing in Ukraine.

Alex Payne, vice president of programs at Colt Canada, a subsidiary of U.S.-owned Colt’s Manufacturing LLC, said they have been in talks with Ukrainian officials for almost two years now.

“The end goal at this point in time is to cooperate with the Ukrainian government in order to support their establishment of a centre of small arms,” Payne said. “Their facility is going to be autonomous to them, that’s the ultimate goal. They will own it, they will manage it.”

Colt Canada will provide guidance on how to create a manufacturing operation that fits Western standards, he said.

“Discussions have really been based on how do we achieve that,” Payne said. “We have laid all that out, including all of the business standards, all the ethical standards and all the quality standards, and all those things that would make it in tune with Colt Canada.”

But the Kitchener-based company, which produces C7 rifles and C8 carbines under licence from Colt Defense LLC, has to overcome several regulatory hurdles in Canada and the U.S. before it can transfer any technology or know-how to Ukraine, Payne said.

Colt Canada has been able to get some minor clearances to run some demonstrations in Ukraine, but setting up production and transferring technology would require a much more thorough regulatory scrutiny by both U.S. and Canadian governments, Payne said.

Adding fuel to the fire? 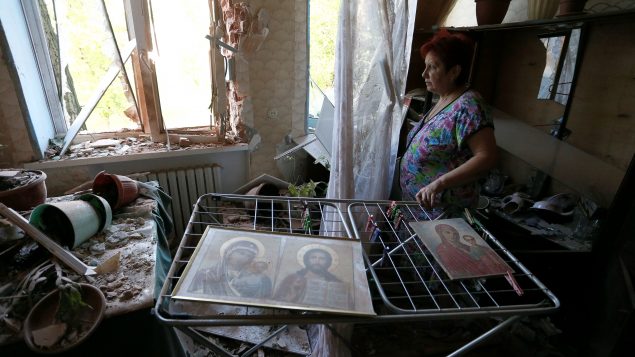 The Russian embassy in Canada, said Canadian weapons sales to Ukraine will only add fuel to the fire in Eastern Ukraine.

“Instead of pressuring Ukrainian authorities to fully implement the Minsk Agreements, starting from immediate cease-fire, Canada continues to provide military equipment and training, adding fuel to the ongoing intra-Ukrainian civil war,” said a statement by the Russian embassy.

The only solution, to which Ottawa can really contribute, is to facilitate direct dialogue between Kyiv and Donbas, sharing Canadian experience in guaranteeing equal language rights and federalism, it added.