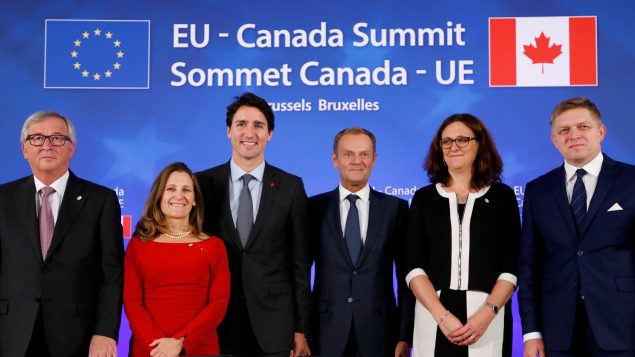 Trudeau to host EU-Canada summit in Montreal next week

Canada and the European Union will hold a summit next week in Montreal to discuss international trade, efforts to combat climate change and pressing global security issues, the Prime Minister’s Office announced Thursday.

EU Trade Commissioner Cecilia Malmström will also participate in the summit, which will highlight the Canada-EU Comprehensive Economic and Trade Agreement (CETA).

Both sides are expected to commit to the full implementation of the EU-Canada free trade agreement, which entered into provisional force in September 2017.

International Trade Minister Jim Carr, Special Envoy to the European Union Stéphane Dion and Canada’s ambassador to the EU, Daniel Costello, will also attend the summit, according to officials.

“Canada and the EU are close partners, allies, and friends,” Trudeau said in a statement. “Our partnership is even stronger thanks to CETA, which is creating good jobs and new opportunities for Canadians and Europeans alike.”

Focus on ‘multilateralism and rules-based trade’

Worried about the ongoing trade war between China and the U.S., as well as the Trump administration’s protectionist policies, Canada and the EU will also underline their “joint commitment to multilateralism and rules-based trade.”

“Canada and the EU will call for the defence of the rules-based multilateral trading system with the World Trade Organisation’s (WTO) at its core,” said a statement by the EU officials.

“Both sides are also expected to reaffirm their strong commitment to the Paris Agreement and will call on all parties to fully implement it.”

The EU and Canada are also expected to discuss how to mitigate the impact of climate change and preserve global biodiversity, the Arctic and oceans, officials said.

The situation in Ukraine, especially around the Russian-annexed Crimea and the Azov Sea, will top the agenda of global security discussions between Canada and the EU.

The leaders will also discuss the growing tensions between the U.S. and Iran, as well the situation in Venezuela and Syria, officials said.