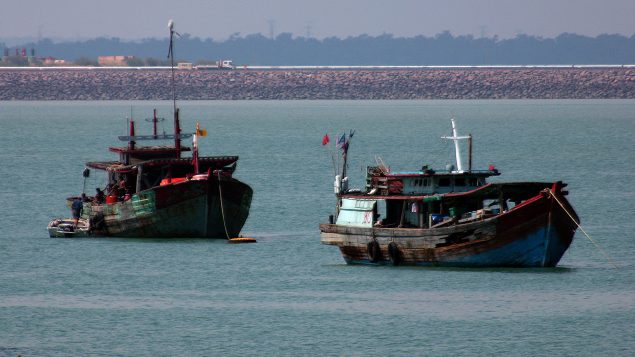 A man boards one of the impounded illegal fishing vessels moored in the harbour of the northern Australian city of Darwin in this May 11, 2005 photo. (David Gray/REUTERS)

The Agreement on Port State Measures to Prevent, Deter and Eliminate Illegal, Unreported and Unregulated Fishing, known as PSMA, enters into force in Canada as of July 20, Fisheries Minister Jonathan Wilkinson and his parliamentary secretary, Sean Casey, announced Friday.

United Nations experts estimate that one in every five fish caught around world every year, about 26 million tonnes of fish, comes from illegal, unreported and unregulated (IUU) fishing, valued at $10 – $23 billion US annually.

“It’s an indicator that we’re part of an international effort to combat illegal, unreported and unregulated fishing, which it really is a scourge on our economy,” said Casey in a phone interview with Radio Canada International. “And it’s a scourge on many of the species that are being fished.”

Under the terms of the agreement, federal officials are granted additional powers to deny port entry and use of port services for vessels carrying illegally harvested fish, Casey said.

It also allows for sharing of information between states and sets inspection priorities and guidelines for training inspectors, he added.

The PSMA, signed under the auspices of the UN’s Food and Agriculture Organization (FAO) in 2009, entered into force internationally in June 2016.

According to FAO, the goal of the agreement is to “prevent, deter and eliminate IUU fishing by preventing vessels engaged in IUU fishing from using ports and landing their catches.”

The agreement reduces the incentive of such vessels to continue to operate while it also blocks fishery products derived from IUU fishing from reaching national and international markets, the UN agency says.

Canada initially signed the agreement in 2010 but it wasn’t until 2015 that the Parliament passed the PMSA Implementation Act, which included various amendments to the federal fisheries legislation, the Coastal Fisheries Protection Act (CFPA), to align it with the PSMA, Casey said.

“Illegal fishing is a serious problem, it’s like organized crime, it’s a multi-multi-billion dollar industry that both harms ecosystems and depletes resources, hurts honest fishermen and it’s a threat to global food security,” Laughren told Radio Canada International in a phone interview. “This one important way, a tool that we have to crack down on illegal fishing.”

“And then if we can match that with things like boat-to-plate traceability, those are the key pillars to help track and crack down and force an end to illegal fishing,” Laughren said.