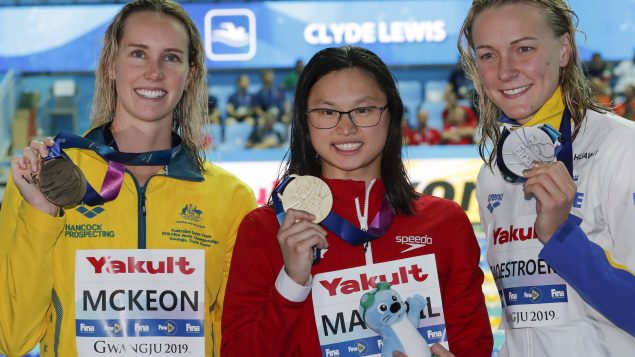 The young athlete from London, Ontario, won the 100-metre butterfly to the great surprise of many observers. 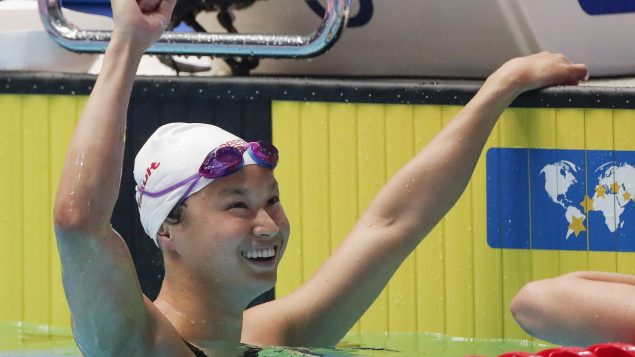 After this race, Canada’s Margaret MacNeil is now the second-fastest woman in history. (Lee Jin-man/AP Photo)

Sjostrom had a great start and was on track to break the world record in her first lap, while MacNeil was fifth.

But the Canadian took charge and caught the reigning Olympic champion with the fastest closing lap — 29.06 — of the eight-woman final and touched first.

“I’ve been working a lot on my second 50m. I tend not to start as fast as the other girls, but I can come back very quickly,” she explained to The Canadian Press.

MacNeil not only handed the Swede her first loss in the event since 2013 but captured Canada’s first gold medal at these worlds.

The 19-year-old MacNeil just made her worlds debut on the senior national team. After this race, she became the second-fastest woman in history after taking down American Dana Vollmer’s Americas record of 55.98 from her London 2012 Olympic gold.

MacNeil is also just the second female Canadian swimmer to ever win a world title, joining Kylie Masse, who won the 100 backstroke two years ago.

A message of hope

After receiving their medals, the three young women gathered on the highest step of the podium and greeted the crowd, presenting a message of support to 19-year-old Japanese swimmer Rikako Ikee.

We could read “Never give up Rikaki,” with hearts drawn in their hands. It’s Sjostrom who proposed this idea. 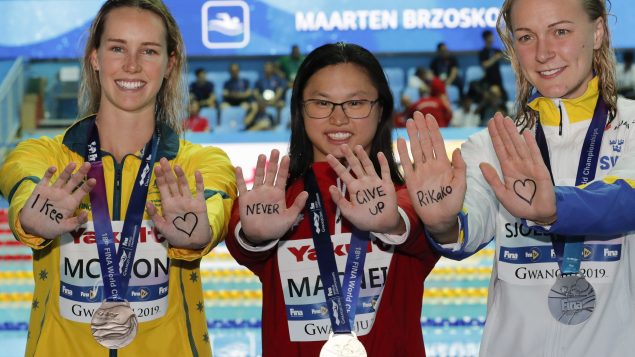 Ikee announced in February that she had leukemia. She was the world junior champion in the 100m butterfly and had the best time in the world in this event last year. She aims to return to competition in time for the Tokyo Olympics.

Meanwhile, Kylie Masse of LaSalle, Ont., and Taylor Ruck of Kelowna, B.C., qualified for the 100m backstroke final. Masse, the current world champion, won her race in the semi-finals.

This was MacNeil’s second medal in two days. The University of Michigan student joined forces with Ruck, Penny Oleksiak and Kayla Sanchez to win the bronze medal in the 4 x 100 m free relay on Sunday.

With files from CBC and The Canadian Press