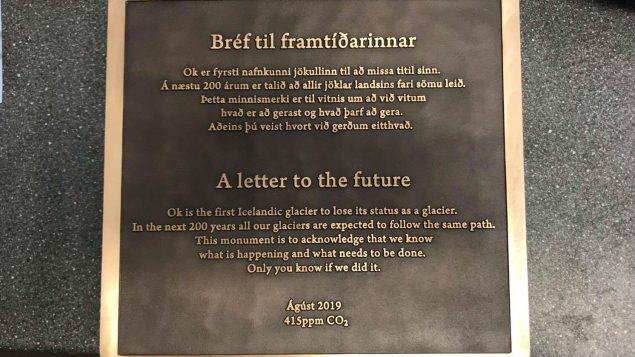 The plaque that will be placed in Iceland on August 18. The text was written by bestselling Icelandic author Andri Snær Magnason and includes notation of 2019 CO2 levels. (Courtesy Rice University)

Researchers to hold memorial to glacier loss in Iceland

Iceland’s Okjökull glacier, or should we say former glacier, will be getting a memorial service this month when a delegation makes the trek to the former site to install a memorial plaque.

The service will take place on August 18 and will include Cymene Howe and Dominic Boyer, the two anthropology professors from Houston Texas’ Rice University who instigated the project. They’ll be joined by Icelandic geologist Oddur Sigurðsson, the glaciologist who first declared Okjökull dead in 2014, as well as members of the Icelandic Hiking Society and the general public.

Invitations have also been extended to Iceland’s Prime Minister Katrín Jakobsdóttir and the Minister of the Environment Guðmundur Ingi Guðbrandsson.

The ceremony for the glacier, called Ok for short, will take place at its former location in western Icelandic municipality of Borgarbyggð.

Glaciers receding around the world

Climate change is affecting glaciers around the world.

In Canada, Arctic glaciers are shrinking at an alarming rate and show no signs of regeneration. On Ellesmere Island, the most northern region of the country, research shows that between 1999 and 2015, over 75 per cent of glaciers lost area with none observed to be increasing. In all, over 1700 square kilometres of ice was lost, or a change in area of six per cent.

Iceland has over 400 glaciers and is experiencing a similar phenomenon.

“Almost all of Iceland‘s glaciers are receding, and scientists predict that they may largely vanish in the next 100-200 years,” says the website of Iceland’s Ministry for the Environment and Natural Resources.

The text on the plaque was written by bestselling Icelandic author Andri Snær Magnason.

“The melting of the glaciers is an issue all future generations will have to deal with and adapt to,” Magnason said in a blog post on his website discussing the project. “As the glaciers are not vanishing and becoming nothing, they are becoming a rising ocean that will come splashing at the city gates of the world.”

The text ends with the CO2 levels parts per million for August 2019.

“It’s the greatest amount of carbon dioxide that we’ve had in our atmosphere for three million years, and we passed this threshold in spring of this year ” said Howe.  “As future people look upon this memorial marker, undoubtedly that number will be higher. They’ll be able to look back and ask the question to our generation: ‘What did they do?'” 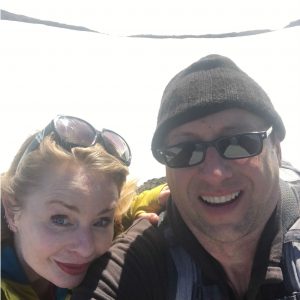 For more on Okjökull glacier, the power of commemoration and the importance of creating a global community around climate change, listen to Eye on the Arctic‘s conversation with Rice University’s Cymene Howe and Dominic Boyer:

The idea for the memorial project came as Howe and Boyer wound up work on their 2018 documentary film about the glacier called “Not Ok.”

They also said living and working in Texas made them think about how decisions made in southern capitals have consequences in northern regions that most people never see.

“There’s a huge influence here of the oil industry and the fossil fuel industry,” Howe said.  “We want to provide a counterpoint to that.”

Howe and Boyer say the climate crisis is daunting but that the fact that the memorial project has gotten coverage everywhere from ‘Tennessee to Vietnam’ has them optimistic.

“That resonance alone is a sign of hope,” says Boyer. “It’s a sign that as a global community, we understand that we have to act as a species, not as individual nations at cross-purposes if we want to solve this problem.”

Norway: Emissions dropping in EU, but not in Norway, The Independent Barents Observer