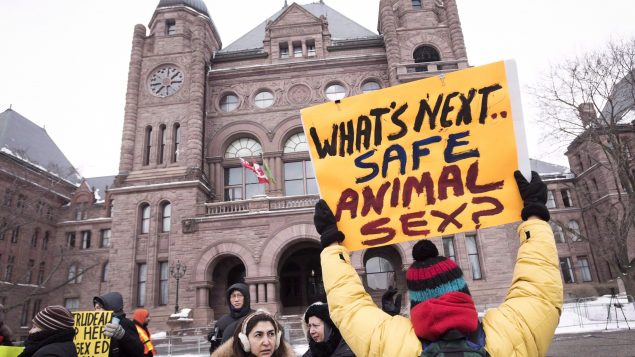 A demonstrator holds up a sign while gathering with others in front of Queen's Park to protest against Ontario's sex education curriculum in Toronto on Tuesday, Feb. 24, 2015. The province unveiled a new sex-ed curriculum on Aug. 21, 2019 that reflects some of the concerns raised by parents about the 2015 curriculum. (Darren Calabrese/THE CANADIAN PRESS)

Ontario’s Progressive-Conservative government unveiled a new sex-ed curriculum Wednesday, a year after repealing a previous curriculum introduced by the preceding Liberal government, which had included lessons on sexting, same-sex relationships and gender identity, raising concerns of many parents.

Under the new Elementary Health and Physical Education Curriculum, Ontario students will be taught about sexual orientation beginning in Grade 5, one year sooner than before, but won’t learn about gender identity and LGBTQ issues until Grade 8.

Parents will also get the right to exempt their children from certain sexual health classes.

“Parents are the primary educators of their children and are their children’s first role models. It is important that schools and parents work together so that both home and school provide a supportive framework for young people’s education,” said a statement from the curriculum’s overview.

The Doug Ford government said the curriculum was updated “to reflect public feedback, research and advice from experts.”

Under the new curriculum, beginning in Grade 1 students will learn about consent, including when it’s appropriate to be touched and the right to give permission.

Grade 1 students will also learn about healthy body image and cyber bullying, including practical strategies to keep them safe online.

The curriculum also includes lessons on issues around cannabis use for students in Grades 5 through 8, and on the effects of concussions from Grade 1 to 8.

“This modernization will keep kids safe in and outside of the classroom,” said in a statement Education Minister Stephen Lecce.