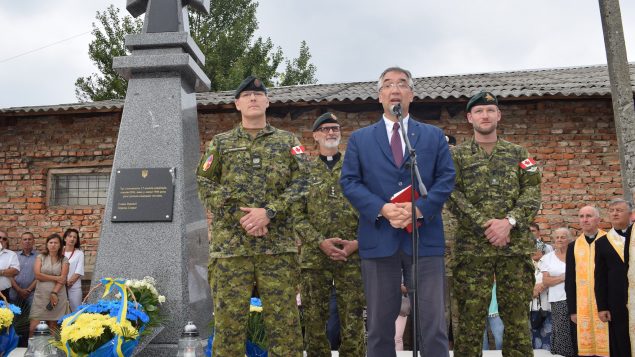 Canada's ambassador in Ukraine Roman Waschuk, flanked by Canadian soldiers, participates in a ceremony of consecrating a monument to 17 members of the Organization of Ukrainian Nationalists (OUN) reportedly executed in 1944 by Gestapo at a Jewish cemetery in the town of Sambir, in Western Ukraine. Photo taken on Aug. 21, 2019. (Sambir municipal council/Facebook)

Canada accused of promoting Holocaust revisionism with memorial in Ukraine

It was supposed to be an event promoting greater understanding between Ukrainians and Jews, an ecumenical service attended by top Ukrainian and Jewish religious leaders meant to mark a new beginning in the sometimes painful shared history of the two communities.

Instead, a controversial monument built in the western Ukrainian town of Sambir, funded through Canadian private donations and consecrated with the help of Canada’s envoy in Ukraine, opened up old wounds and raised questions about whether Ottawa is complicit in a campaign to whitewash a horrific chapter of Ukraine’s Second World War history.

The monument is a large granite cross erected on the grounds of a derelict Jewish cemetery, where more than 1,200 Jews were shot and dumped into mass graves in 1943 by the Nazis and their Ukrainian collaborators. It’s dedicated to the memory of 17 Ukrainian nationalists executed by the Gestapo in 1944 (however, some historians question the official version of the execution, saying that it’s highly unlikely that Gestapo would have executed these fighters at a time when Ukrainian nationalist organizations had resumed collaboration with the Nazis).

Flanked by Canadian soldiers, Canada’s ambassador to Ukraine Roman Waschuk took part in the Aug. 21 ceremony to unveil the monument dedicated to executed members of the Organization of Ukrainian Nationalists (OUN) and its military wing, the Ukrainian Insurgent Army, known by the Ukrainian acronym UPA.

The event was organized by Ukrainian Jewish Encounter (UJE), a Canadian-based private initiative founded by Ukrainian-Canadian philanthropist James Temerty and aimed at strengthening “mutual comprehension and solidarity between Ukrainians and Jews.”

The ceremony, which also included the consecration of a future memorial to the Jewish victims of the Holocaust in Sambir, was attended by the heads of the newly independent Ukrainian Orthodox Church, the Ukrainian Greek Catholic Church and the Chief Rabbi of Ukraine, as well as a number of regional and municipal politicians. 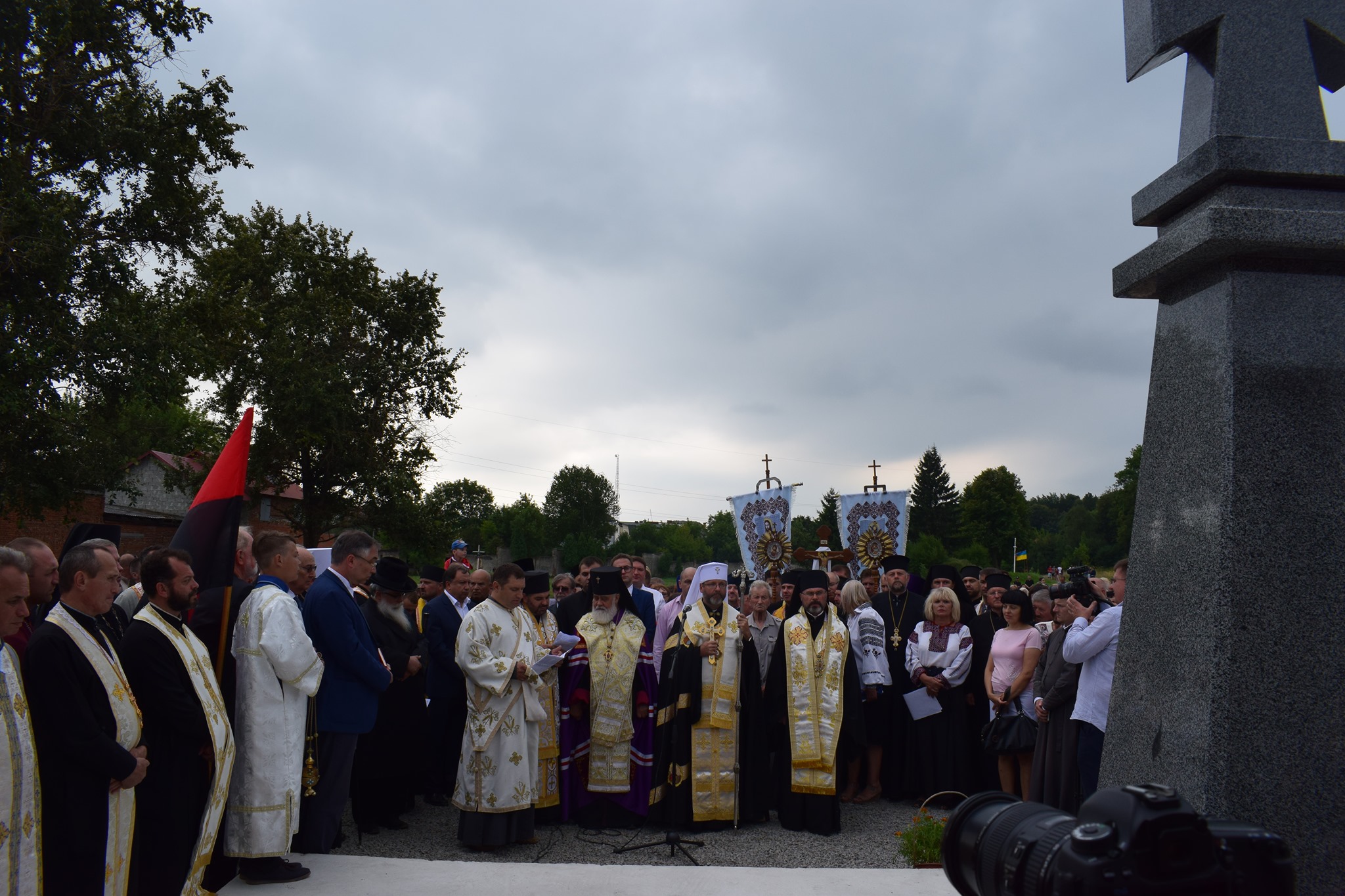 Canada’s ambassador in Ukraine Roman Waschuk, the heads of the newly independent Ukrainian Orthodox Church, the Ukrainian Greek Catholic Church and the Chief Rabbi of Ukraine, as well as a number of regional and municipal politicians participate in a ceremony of consecrating a monument to 17 members of the Organization of Ukrainian Nationalists (OUN) reportedly executed in 1944 by Gestapo at a Jewish cemetery in the town of Sambir, in Western Ukraine. Photo taken on Aug. 21, 2019. (Sambir municipal council/Facebook)

But critics of the event say erecting a cross dedicated to members of OUN-UPA – an anti-Semitic organization that actively collaborated with the Nazis during much of the Second World War – in the middle of a Jewish cemetery amounts to desecration and a crude attempt to rewrite history.

“It’s a blatant insult to the memory of the Jewish victims,” Eduard Dolinsky, head of the Ukrainian Jewish Committee, told Radio Canada International in a phone interview from Kyiv.

“It’s like erecting a monument to murderers on the graves of their victims.”

Dolinksy said the participation in the dedication ceremony of Canadian diplomats and soldiers, as well as Ukrainian religious leaders, was particularly troubling.

“But most of all I’m perturbed by this desecration,” he said. “This is so outrageously cynical.” 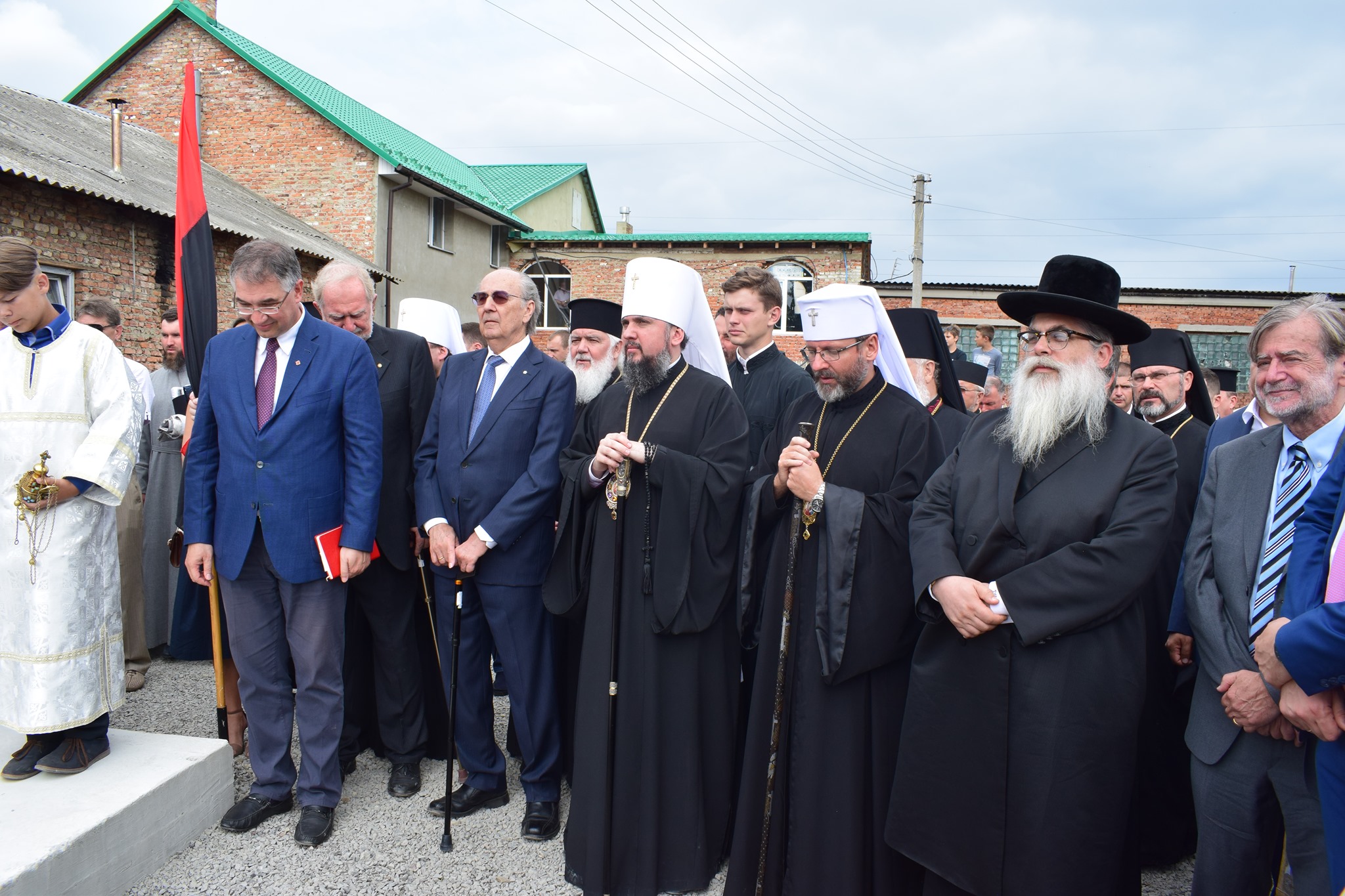 First row from right to left) Mark Freiman, a member of the board of directors of UJE, Ukraine’s Chief Rabbi Yaakov Dov Bleich, Major Archbishop and the Head of the Ukrainian Greek Catholic Church Sviatoslav, Metropolitan Epiphanius, the primate of the Orthodox Church of Ukraine, Ukrainian-Canadian philanthropist James Temerty and Canada’s ambassador in Ukraine Roman Waschuk, participate in a ceremony of consecrating the ‘Remember Memorial Park’ project in Sambir, Ukraine. Photo taken on Aug. 21, 2019. (Sambir municipal council/Facebook)

Mark Freiman is a member of the board of directors of UJE and a former president of the Canadian Jewish Congress; his parents were among the roughly 100 Jews who survived the Jewish massacres in Sambir. He said building a monument dedicated to executed OUN-UPA members was part of “a necessary compromise” required to secure the support of the local community after years of unsuccessful attempts to build a memorial to the 1,200 Jews who were executed there on the first day of Passover in 1943.

“My understanding is there absolutely no evidence that they [the 17 Ukrainian nationalists] participated in any anti-Jewish activities, I haven’t seen any such information,” Freiman, who was in Sambir to take part in the ceremony, told Radio Canada International in a phone interview from Ukraine.

It was indeed a very special and moving ceremony. I must mention that in my personal opinion this historic day was only possible in a Democratic #Ukraine "Democracy forces society to respect other opinions and trains people in tolerance and respect of differences" https://t.co/fInJqD5geu

In 2000, Jewish-Canadian philanthropist Jack Gardner, who was born in Sambir, tried to rehabilitate the cemetery and erect a large Star of David monument as a tribute to the Jews buried at the site.

But the move infuriated local nationalists who vandalized the monument and erected three 10-metre-high wooden crosses around the perimeter of the Jewish cemetery and mass grave.

One of those crosses has been taken down as part of the deal to build the memorial to the executed Ukrainian nationalists – which itself was a precondition for building a memorial park to honour the Jewish victims, Freiman said.

The two remaining crosses are expected to come down as well, he said.

“We anticipate that the Jewish cemetery will become a memorial park. The memorial to the Jewish victims will occupy about a hundred metres in front of the mass grave, which is being restored,” said Freiman.

“And we hope it would be a place of pilgrimage for people all over the world to learn about the ‘Holocaust by bullets’ and the terrible events that occurred.”

The monument to the 17 OUN-UPA activists will be kept separate from the memorial park, he added.

“I can’t prevent Ukrainians from remembering from their vision of history, but I would be very uneasy about such a monument in Canada,” Freiman said.

“There are sometimes compromises that need to be made in order to pave the way for monuments that Jewish people need to put for their own victims. And it may not always be possible to have a perfect solution to all problems.”

Dolinsky said he’d prefer no Jewish monument at all to one built on the basis of revisionist history.

“It was a so-called deal with the devil,” Dolinksy said. “They thought that they’d substitute one disgrace by another but it didn’t work out that way.” 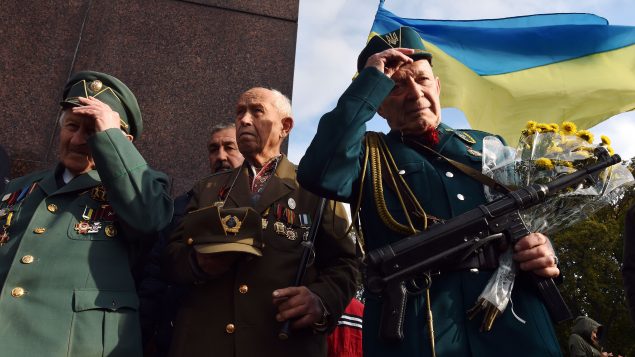 Veterans of the Ukrainian Insurgent Army (UPA) take part in a rally in Kyiv on Oct. 14, 2016 to celebrate the Defender of Ukraine Day and the creation of UPA. (Genya Savilov/AFP/Getty Images)

Ivan Katchanovski, a Ukrainian researcher who teaches political science at the University of Ottawa, said that while there was some degree of conflict between OUN-UPA and the Nazis, the reported execution of 17 nationalists was an exceptional event that is now being used to present the Ukrainian nationalists as valiant freedom fighters who fought both the Soviets and the Germans for an independent Ukraine.

“OUN and UPA were basically radical nationalist, semi-fascist organizations,” Katchanovski said. “OUN had elements of fascist ideology, totalitarian ideology, one-party dictatorship in which they would be the ruling party.”

OUN’s ideology called for the creation of a racially pure Ukraine, free of ethnic minorities such as Jews, Russians and Poles, Katchanovski said.

While OUN and UPA conducted some limited operations against the Germans, their main war effort was focused on the the Polish population of Western Ukraine in 1943 and 1944, as well as fighting Soviet partisans, Katchanovski said.

Historians estimate UPA killed between 60,000 and 100,000 ethnic Poles in a mass campaign of ethnic cleansing in the Volhyn and Galicia regions of Western Ukraine.

Swedish historian Per Anders Rudling, who is writing a book on the politics of memory in Ukraine, said the monument unveiling event in Sambir was more about contemporary Ukrainian politics and nationalist mythmaking than setting the historical record straight.

“The idea, which is important to contemporary Ukrainian politics, is to present the Ukrainian Insurgent Army (UPA), as enemies and opponents of the Nazis, not as collaborators,” Rudling said.

“There have been a number of places across Western Ukraine where they have sort of appropriated the perceived moral capital of the suffering of the Jews for political purposes.”

The ceremony in Sambir was another attempt to sanitize the past, he said.

“They try to pass off Ukrainian nationalists as somehow sharing the plight of the Jews, when in reality the Organization of Ukrainian Nationalists was actively involved in mass murder of Jews,” Rudling said in a phone interview from Sweden.

Ukrainian-Canadian historian John-Paul Himka, who has extensively researched Ukrainian nationalist movements during the Second World War, said that instead of dabbling in revisionist mythmaking, the Canadian government should be working behind the scenes to encourage the new Ukrainian government to come to terms with its history.

“I also don’t think that Canada should participate in monuments to these people, because they were war criminals,” Himka said. “It’s very clear.”

Rudling and Himka said they believe Waschuk’s presence at the ceremony in Sambir is partly due to his potential exposure to the prevailing nationalist myths while growing up in the Ukrainian-Canadian community.

Many of the displaced Ukrainians who came to Canada after the Second World War, including Waschuk’s parents, were refugees from Western Ukraine, which was a hotbed of the OUN and UPA support, said Rudling.

Ukrainian intellectuals who were tied to the OUN had a very powerful influence on the life of the community in Canada, including on key organizations such as the Ukrainina Canadian Congress that has built monuments to OUN and UPA members in Canada and has been pushing for a revisionist view of their wartime record, said Himka.

Their views of Ukrainian history were exported back to Ukraine after the country became independent in 1991, but particularly after the 2004 Orange Revolution, Himka said.

Global Affairs Canada declined a request from Radio Canada International for an interview with Ambassador Waschuk.

Officials with Global Affairs Canada also did not provide a copy of Waschuk’s speech at the monument unveiling in time for publication.

Temerty, founder of Ukrainian Jewish Encounter, could not be reached for comment.