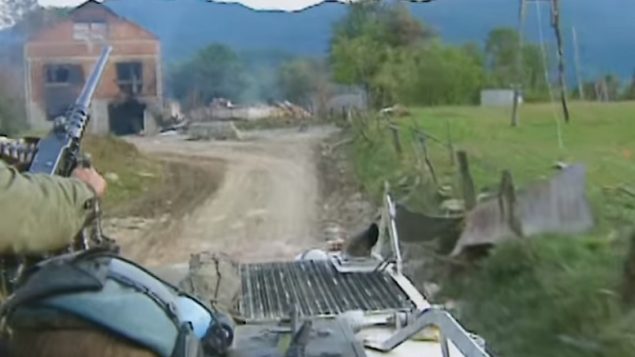 A Canadian M113 armoured personnel carrier with a .50cal machine gun rolls toward a burned farmhouse in the Medak pocket in 1993 (DND video-Youtube)

Sadly, many of Canada’s biggest and bravest military successes go relatively unnoticed and forgotten; incredible battles like Hill 70, Canada at D-Day and beyond, Kapyong, and many others of which Canada should take great pride, are generally little known both in Canada and by the world.

Such is the case for Canadian forces and the Battle of the Medak Pocket in Croatia which up to 1993 and before participation in Afghanistan, became the biggest battle for Canadian troops since the Korean War.

As the former Yugoslavia began dissolving into its ethnic and religious component states at the end of the 1980’s, bitter conflict began. The U.N was called in and had troops stationed between the various protagonists, which included the Croatians and Serbians. It was known as the UN Protection Force- UNPROFOR.  But those troops from various countries had been weak and ineffective in preventing attacks and were seen as such by both sides.

Canadians had been involved in U.N duties since 1991, but in March 1993, the 875 members of the 2nd Battalion Princess Patricia’s Canadian Light Infantry (2PPCLI) left for a six month tour. 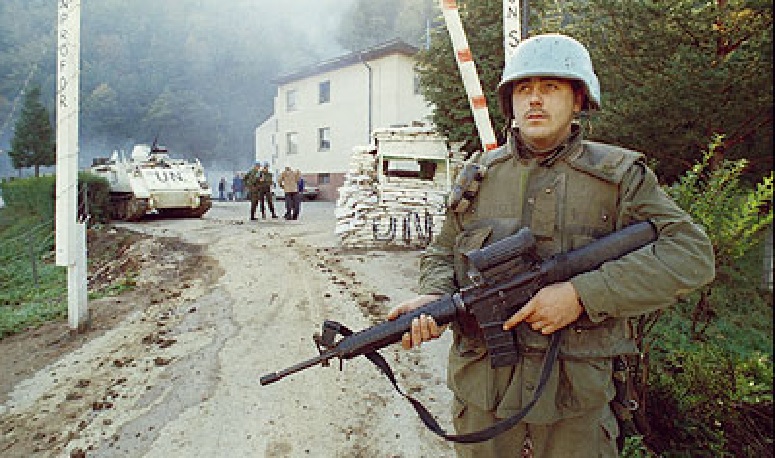 A Canadian soldier guards a checkpoint in the former Yugoslavia (DND)

Initially assigned by the French commander to a protected area in northwestern Croatia, they earned respect of the protagonists as they developed a reputation as being tough but not favouring any side.  In September a very tenuous ceasefire saw the Serbian population in the south come under increasing military pressure from the Croats.  It involved a mostly Serbian farming area around Medak in Croatian territory.

UNPROFOR commander, French General Jean Cot, seeing the need for a determined and professional force presence there sent the Canadians to place themselves between the two sides as a final operation before their tour was over. 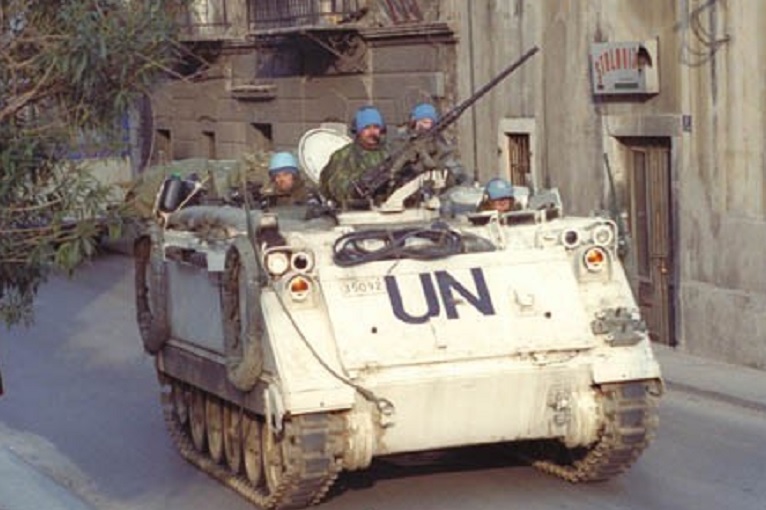 As they moved through Serb lines on September 9 they were immediately subjected to Croat fire from mortars and artillery and dug in as fire came in for several days.  International pressure and the Canadian commander LCol. Jim Calvin negotiated a deal on September 13 to have the Croats move back to positions held on September 8.

Backed by two French mechanized companies, on September 15 the Canadians moved forward into positions agreed to in the deal but quickly came under tremendous fire from the Croats  who still occupied the few small Serbian inhabited towns in the “pocket”.
Apparently, given the weakness of previous U.N forces the Croats seemed to think they could easily frighten and push the U.N troops out of their way as they had before. The fighting continued into the 16th.

The Canadian group, almost half of which consisted of hastily called up and somewhat inexperienced reservists, were armed mostly with light weapons. As fire came in specifically targetting them, they held their ground against repeated attacks, holding out against Croat tanks, artillery, mortars and machine guns returning fire for some 15 hours in an intense battle.
The Medak Pocket battle left four Canadians wounded, and apparently 27 Croats killed. 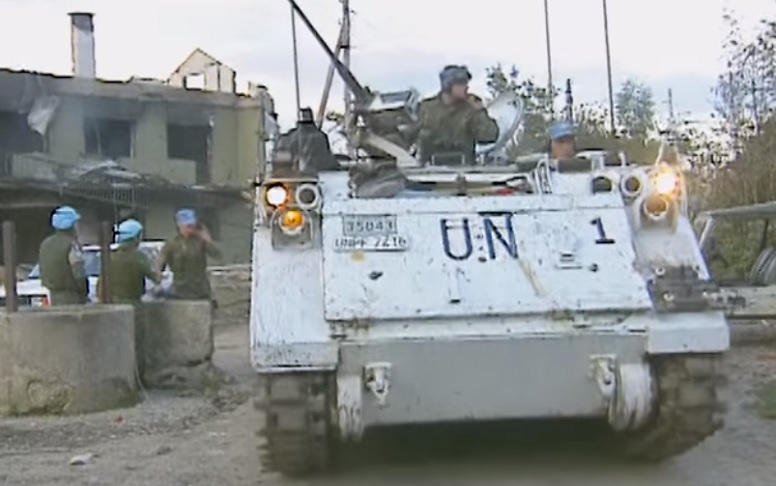 LCol Calvin at great personal risk, negotiated a new deal with the Croat forces to have them withdraw, but before the outgunned Canadians could move in on September 17, an extremely tense standoff occurred as a heavily armed Croat force, including a T-72 tank blocked the road while the Croats engaged in a brutal campaign against the remaining Serb civilians behind their line.

The tragic sounds of the Croat ethnic cleansing campaign, and the later horrific evidence, left many of the Canadian soldiers with post traumatic stress disorder.

Although the Canadians had shown tremendous bravery, resilience, and determination in stopping the Croat advance and carrying out the U.N. plan, there was no fanfare, no show of appreciation from Canadian officials or military when they returned. Politicians and military brass were pre-occupied with the bad press over a major military scandal involving torture in Somalia and neither wanted more questions about Canadians had been involved in a major battle and killing Croats regardless of the just cause.
For many who took part, especially the reservists, nothing was provided in the way of de-stressing or counselling. Several marriages later broke up, there were many cases of alcoholism and homelessness. 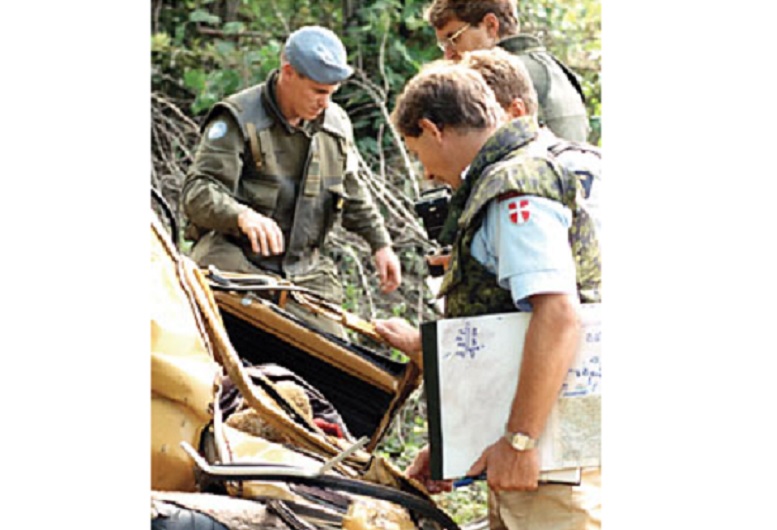 Teams of Canadian, and other, doctors, engineers, and soldiers search through the rubble after the battle looking for survivors and evidence of ethnic cleansing. (Sgt M Bonin- CF)

Although sent in as “peacekeeping” force the Canadians demonstrated yet again that they were an extremely courageous, dedicated, and professional army and would clearly fight back if pressed.
Through the Canadians and the Battle of the Medak Pocket, the U.N force was able to regain the respect it had lost and help prevent further escalation of violence until a proper peace and stability could be achieved in the Balkans albeit some time later. Evidence gathered by the Canadians in the pocket was later used in the Hague war crimes trials. 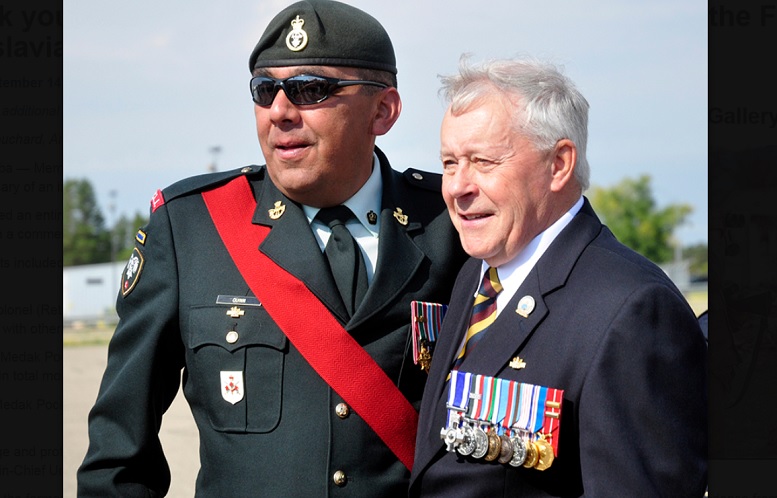 Warrant Officer Sheldon Quinn, a Veteran of the Battle of Medak Pocket, with Lieutenant Colonel (Retired) James Calvin, his commanding officer during the battle. Former and current members of 2nd Battalion, Princess Patricia’s Canadian Light Infantry marked the 25th anniversary of Medak Pocket with a series of events held on the weekend of September 7 to 9, 2018 at Canadian Forces Base Shilo in Manitoba. Photo: Jules Xavier/Shilo Stag. ©2018 DND/MDN Canada.

It was only in 2002, that the 2PPCLI was recognised for their courage and professionalism with the Commander–in-Chief Unit Citation by then Governor-General Adrienne Clarkson.
The battalion was also awarded the UN Force Commander’s Commendation, the first such award and one of three awarded in UNPROFOR history.  The Canadian Forces also recognized Lt. T Green, Gnr. S Leblanc, and W Johnson for bravery. Sgt. R Dearing was recognized for leadership, and LCol. J Calvin was awarded the Meritorious Service Cross.