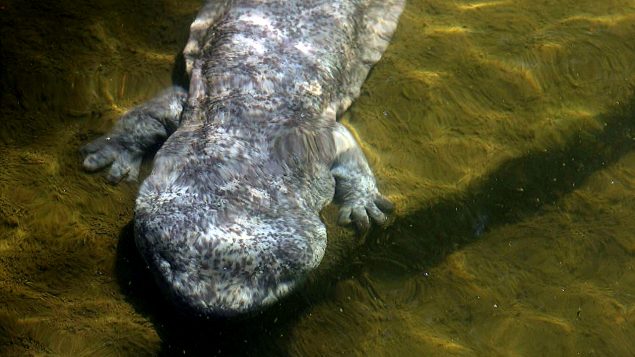 This new finding should help guide efforts to save the critically endangered animal. (Photo: Bob Murphey)

A group of Canadian, British and Chinese scientists have discovered new species of Chinese giant salamanders, the world’s largest amphibians.

For a long time, biologists believed that all Chinese giant salamanders were part of the same species, Andrias davidianus.

Until now, as a genetic study of museum specimens spread across Canada, the United Kingdom and the United States reveals that there are actually three different species that live in three different river systems and mountain ranges in China.

For example, the largest specimen of Chinese salamander ever found – a 1.8-metre-long individual bigger than most humans – could be a member of a new species living in the Pearl River system in southern China. This specific species is now known as the South China giant salamander and has been given the scientific name Andrias sligoi, scientists report this week in the journal Ecology and Evolution.

Robert W. Murphy, Senior Curator of Herpetology at the Royal Ontario Museum and Professor in the Department of Ecology and Evolutionary Biology at the University of Toronto, participated in this study. He explained that not only have scientists discovered three new species, but there could be even more:

The second species retains the original name given to all Chinese giant salamanders, Andrias davidianus, but applies only to animals in the Yangtze River system.

The third one was identified using samples collected by Bob Murphy in the Yellow Mountains of China in the 1990s. He gave us more details on how the team studied these samples:

Photo: Karlo, a 158 cm long Chinese giant salamander in its enclosure at the Prague Zoo in the Czech Republic. (David W Cerny/REUTERS)

However, since Murphy’s samples represented only parts of animals rather than whole specimens, it could not be officially designated as a new species.

Also, the fact that scientists have mainly treated dried-up specimens makes it difficult to know what the animals originally looked like. Thus, researchers cannot really determine the physical differences between each species.

A paper published in 2018 suggested that most population of Chinese giant salamanders were gone or extinct but according to Bob Murphy “efforts since that time in China have found quite a few different populations.”

“But these are giant animals, and of course they never occur in extremely high density so in very remote areas they still occur broadly across China although not in great numbers”, notes the professor.

Species are also rare in the wild, partly due to poaching. They are raised on farms to be sold later as delicacies. Murphy told us more about this phenomenon:

As the professor explained, the problem with farmed Chinese giant salamanders is that it is very difficult to trace their lineages because the animals have been moved to many different places.

That’s why the research team looked at museum specimens collected in the early 20th century, before the giant salamander breeding industry began.

The fact that scientists have been able to identify these three species is nevertheless good news, as it could help to preserve them in the future. Murphey explained why:

Today, thanks to ongoing efforts in China, where the authorities are involved in the preservation of this animal, the database has significantly increased in terms of geographical coverage to find wild genetically pure populations, Murphey said.

The number of documented animals has increased from 17 in the current paper to hundreds and hundreds throughout China, explains the professor. The team will now review this new database and assess whether any new species are present in the wild.

They will look if “releases of hybrid salamanders may have cause some unwanted or potentially dangerous genetic mixing in them.”