A Canadian LAV (light armoured vehicle) arrives to escort a convoy at a forward operating base near Panjwaii, Afghanistan at sunrise on Nov.26, 2006. Foreign Affairs Minister Francois-Philippe Champagne says the federal government has renegotiated a $14-billion deal to supply a modernized version of the LAV to Saudi Arabia to secure better conditions. (Bill Graveland/THE CANADIAN PRESS)

As Canada formally acceded to the United Nations Arms Trade Treaty (ATT) Tuesday, a coalition of Canadian civil society groups is calling on the federal government to cancel its multibillion contract to supply Saudi Arabia with advanced armoured vehicles.

The coalition, which includes Amnesty International, Oxfam Quebec and peace group Project Ploughshares among others, calls on Ottawa to “honour the spirit and intent of the ATT” by ending the export of Canadian-manufactured Light Armoured Vehicles (LAVs) to the oil-rich kingdom.

“This morning I sent a formal notice to the minister of foreign affairs [Chrystia Freeland] asking her to annul the export permits that have already been issued and that would allow the export of these LAVs that continue to be produced in London by General Dynamics Land Systems – Canada,” Turp told Radio Canada International in a phone interview.

“And I have mentioned in that formal notice that if on Sept. 30 there is no positive answer, I will bring a case and ask courts to order the government to annul these export permits.”

“As we have said before, we are reviewing export permits to Saudi Arabia and no final decision has been made,” Babcock said in an emailed statement to Radio Canada International. “While this review is on-going, no new permits have been issued.”

Evidence of war crimes in Yemen 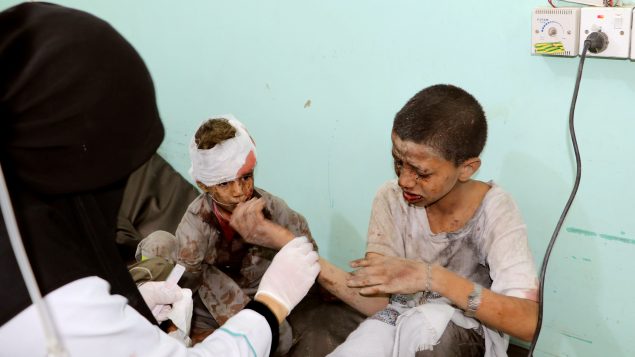 The Liberal government approved the controversial $15-billion deal, signed by the previous Conservative government, to supply the Islamic Kingdom with hundreds of LAV 6.0 advanced combat vehicles in 2016.

In a statement released Tuesday, the coalition said there are credible reports that Canadian military equipment – including LAVs produced in Ontario – has been used by Saudi Arabia in Yemen.

The conflict between the Saudi-led coalition, which props up the Western-backed government of Yemen, and Iran-backed Houthi rebels, who control most of the country, has killed more than 6,700 civilians and injured over 10,700 others.

While all sides of the conflict have been accused of committing war crimes and other serious violations of international humanitarian law, the majority of civilian casualties have resulted from airstrikes carried out by the Saudi-led coalition, according to the Office of the United Nations High Commissioner for Human Rights (OHCHR).

Hundreds of thousands of Yemenis have been displaced by the fighting and millions suffer from shortages of food and medical care amid the world’s largest cholera epidemic ravaging the country.

“Air strikes, indiscriminate shelling, acts of torture and sexual violence are only some of the many violations suffered by Yemen’s civilian population on a daily basis,” said the statement by the coalition of Canadian civil society and human rights groups.

“In light of these alarming findings, Canada must act rapidly to avoid fuelling, in any way whatsoever, this devastating conflict and prolonging the suffering of the Yemeni people.”

States funnelling arms to the parties to the conflict may be held accountable for their role in aiding or abetting the commission of human rights violations, the statement added.

Justin Mohammed, a spokesperson for Amnesty International Canada, said continued arms sales to Saudi Arabia are inconsistent with Canada’s legal obligations under the ATT because there are reasons to believe that they could be used to commit serious human rights and international humanitarian law violations.

“The spirit and the letter of the ATT make it incumbent upon the Government of Canada to fully examine the risks that Canadian arms exports could be used to commit serious violations of international human rights or international humanitarian law,” Mohammed said. “In light of the conflict in Yemen, the Saudi LAV deal is an obvious place to start.”

The treaty came into force in December 2014 and seeks to regulate the sale of conventional arms – anything from small arms to tanks, fighter jets and warships – to minimize the humanitarian impact of the global arms trade.

The Liberal government announced that it plans to accede to the ATT in 2016, after the previous Conservative government refused to put Canada’s signature on the international treaty when it was first introduced in 2013. In 2017, the Liberals tabled legislation to amend the Export and Import Permits Act (EIPA) to establish controls on brokering of military items and to incorporate directly into Canadian law the assessment criteria laid out in the ATT.

People gather at the site of a house damaged by Saudi-led airstrikes in Sanaa, Yemen, Monday, Jan. 4, 2016. According to U.N. figures, the war in Yemen has killed at least 6,872 people since March 2015, when fighting escalated after the Saudi-led coalition began launching airstrikes targeting the Houthi rebels. (AP Photo/Hani Mohammed)

The new criteria require the minister to assess if the export of arms or defence technology would undermine peace and security, or could be used to commit or facilitate serious violation of international humanitarian or human rights law, breach international conventions or protocols on terrorism or organized crime to which Canada is a party, or be used against women and children.

“The Minister cannot issue an export or brokering permit if there is a ‘substantial risk’ that exporting or brokering the goods or technology would result in any of the negative consequences listed above,”  Barutciski and Scheiner said in a written analysis of these legislative and regulatory changes.

Turp said Canada’s accession to the ATT creates a new legal basis for his court challenge of the LAV sale to Saudi Arabia.

Turp’s previous attempts to have the Federal Court stop the export of LAVs were unsuccessful.

“What’s interesting now is that there is a treaty and there is also implementing legislation of that treaty,” Turp said.  “And the rules have changed because the discretion that the minister had before under Canadian law, which the court acknowledged, doesn’t exist anymore.”

Turp said there is a good chance that the Federal Court will follow the example of courts in the U.K. and Belgium and suspend the export permits.

While for now he is focusing on the LAV deal, it’s possible that legal action can be taken against other Canadian arms exports to Saudi Arabia and to other countries, such as the United Arab Emirates, which despite its recent decision to scale back its military presence in Yemen, has also been heavily involved in the conflict, Turp said.