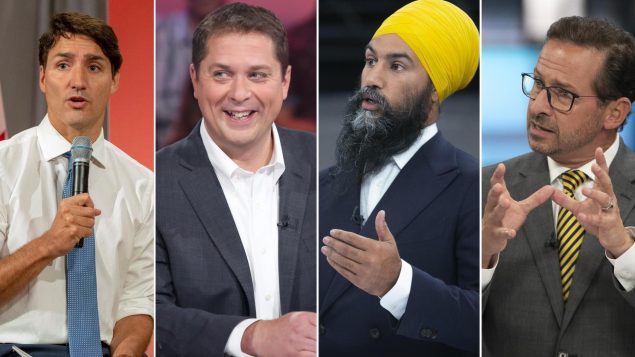 4 federal party leaders to face off during French language debate

With nearly half of the campaign behind them, four federal leaders will take the stage in Montreal tonight for the first debate to feature Liberal Leader Justin Trudeau.

Conservative Andrew Scheer, New Democrat Jagmeet Singh, and Yves-Francois Blanchet of the separatist Bloc Quebecois will face off with Trudeau at 8 p.m. Eastern time, in a French-language debate hosted by the private TVA television network and the tabloid Le Journal de Montréal.

Green Party Leader Elizabeth May and Maxime Bernier, the leader of the upstart People’s Party of Canada were not invited to the debate.

Tonight’s debate will be the first opportunity for Scheer and Singh to confront Trudeau, who skipped the first debate of the campaign organized by Maclean’s magazine and Citytv. Trudeau also refused to participate in the debate on foreign policy, forcing organizers of the Munk Debates to cancel the event entirely.

All four of the leaders are hoping to change the momentum of the 21-day-old campaign, with polls showing hardly any change in voters’ preferences since it began on Sept. 11.

The Conservatives hold a narrow lead over the Liberals, but the Liberals are better positioned to win more seats because so much of the Tory support is concentrated in Canada’s Prairie provinces.

According to CBC polls analyst Eric Grenier, a minority government headed up by either the incumbent Liberals or the Conservatives is somewhat more likely than a majority government at this stage.

Neither the New Democrats nor the Greens have been able to build any significant momentum so far during this campaign and the NDP is facing the threat of a total wipe-out in Quebec, where the resurgent Bloc Quebecois is making gains, especially among francophone voters.

A strong Liberal showing in Quebec, where polls show them with a small but consequential lead, could sustain the Liberals in power; a strong Conservative showing could sink them.

The Liberals held 40 seats in Quebec when the election was called. But the party’s strength is heavily concentrated in Montreal and its suburbs. The Conservatives held 11 seats, the NDP 14, the Bloc 10 and Bernier, who left the Conservative Party to launch the PPC, was his party’s sole member of parliament.