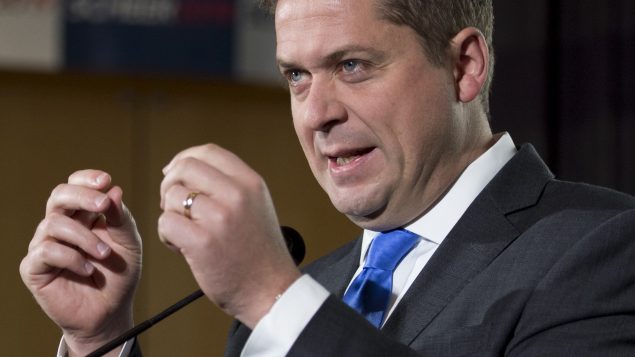 Conservative Leader Andrew Scheer says he will work to tear down interprovincial trade barriers if his party forms the government following the Oct. 21 federal election.

Speaking to reporters in Quebec City, Scheer promised to convene a meeting with provincial and territorial premiers shortly after being elected to begin the process of eliminating provincial trade barriers that are costing Canada’s economy billions of dollars.

“These barriers prevent the free flow of people, goods and services across provincial borders,” Scheer said. “They make it more expensive to run a business, they hurt consumers with higher prices and less competition, and they discourage and frustrate big dreaming innovators, who want to change the world.”

Canada is missing out on “a whole new frontier of opportunity and prosperity,” Scheer added.

“This is incredibly frustrating,” Scheer said. “Think of all the people we could lift out of poverty and help get ahead in life if we simply got government out of our own way.”

Scheer vowed to appoint a federal minister of interprovincial trade whose sole job would be to lead negotiations on his behalf and oversea the implementation of a new free trade deal.

“It should not be easier to trade with other countries than between Canadian provinces,” Scheer said. “We are one free country, we should have on free market.”

Scheer said despite the Canadian Free Trade Agreement, signed in 2017, Liberal Leader Justin Trudeau has failed to eliminate the many trade barriers that exist across provincial jurisdictions.

Scheer said federal-provincial relations have soured because of “Trudeau’s my-way-or-the-highway” approach to pushing a carbon tax on jurisdictions that have rejected a national price on carbon emissions.

“Only a new Conservative government will work with the provinces and territories to create the kind of economic prosperity and opportunity that will put more money in your pockets so you can get ahead,” Scheer said.

According to federal statistics, internal trade between provinces and territories accounts for just under one-fifth of Canada’s annual GDP, or $370 billion.

In 2017, the federal, provincial, and territorial governments negotiated the Canadian Free Trade Agreement (CFTA) to improve the flow of goods, services, and investments across provincial and territorial borders.

The agreement came into force on July 1, 2017, but it has been roundly criticised for failing to tear down many of the existing barriers.

The federal government estimates that cutting red tape and other barriers that hinder trade within Canada could result in an economic benefit roughly comparable to the projected benefit of the Canada-European Union Comprehensive Economic and Trade Agreement (CETA).