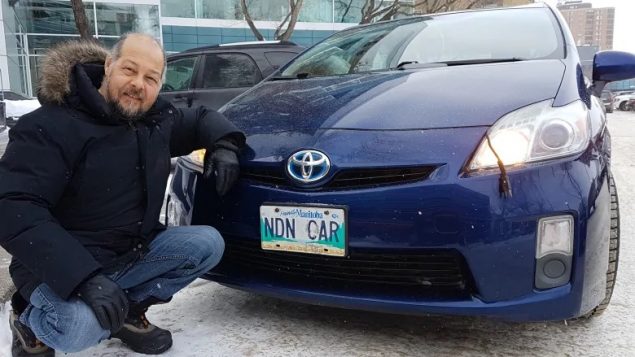 Bruce Spence, a Cree First Nations man, shows off his personalized plate, which he says was inspired by a song by Keith Secola. He has been allowed to keep the plate after an out of court settlement with the Manitoba licensing agency (Colleen Simard)

Personalised licence plate battles: A win, a loss, and one waiting

In Canada, individual provinces control issues surrounding motor vehicles, which includes the issuing of vehicle licence plates. In recent years they’ve allowing the issuing of so-called “vanity” plates in which a person can pay extra for a simple letter or number combination to present a personalised message.

However, plates deemed to be offensive, hateful, or simply in poor taste are not allowed.

There have recently been cases where a plate was issued, then someone complained and the plate revoked. That was the case for Mr David Assman, who had a Saskatchewan plate issued using his name, and later revoked after a complaint that it was offensive, in spite of the fact that is his family name. 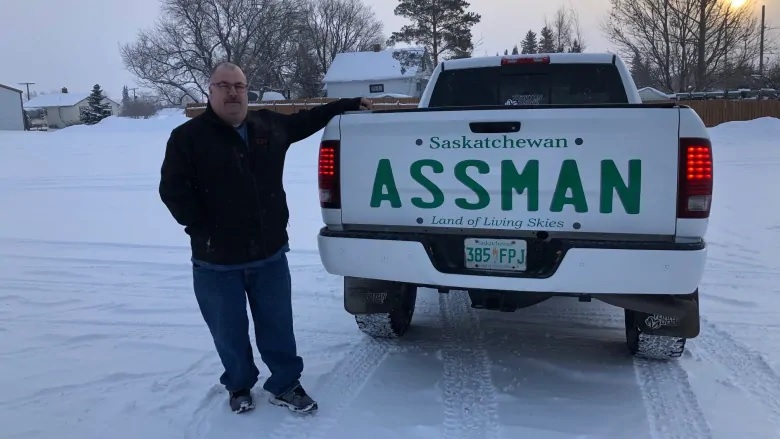 Saskatchewan issued Dave Assman a plate but when someone complained it was offensive the province demanded he turn it. So he came up with a big solution, a tailgate-sized replica of the plate he couldn’t get. (Supplied Dave Assman-via CBC)

Now an indigenous man in Manitoba has been allowed to keep his plate after an initial order to hand it back in.  Bruce Spence had been granted the plate NDN-CAR (Indian Car) seven years ago after he said he was inspired by a 1992 folk rock song NDN Kars by Keith Secola, an Anishinabe musician.  After someone complained, Manitoba’s licensing agency demanded its return saying it was offensive and ethic slang. This week an out of court settlement means Spence can keep his plate.

Another case however, was lost by a Star Trek fan who copied the slogan of the “Borg”.  Nicolas Troller’s plate ASSIMIL8 (assimilate) was revoked in 2017 on the claim that it was offensive to indigenous peoples because of past history in Canada of assimilation policies regarding First Nations peoples. According to the Justice Centre, arguing on Troller’s behalf, the complaint was filed by an activist in Ontario, and no-one in Manitoba had complained. They also argued the revocation was violation of his constitutionally protected right to free expression. The court ruled that Troller’s rights were indeed violated, but  that the province was justified in violating Mr. Troller’s constitutional right because it was “reasonable” to determine the word “assimilate” is “offensive”, and to censor a personalized licence plate on that basis. 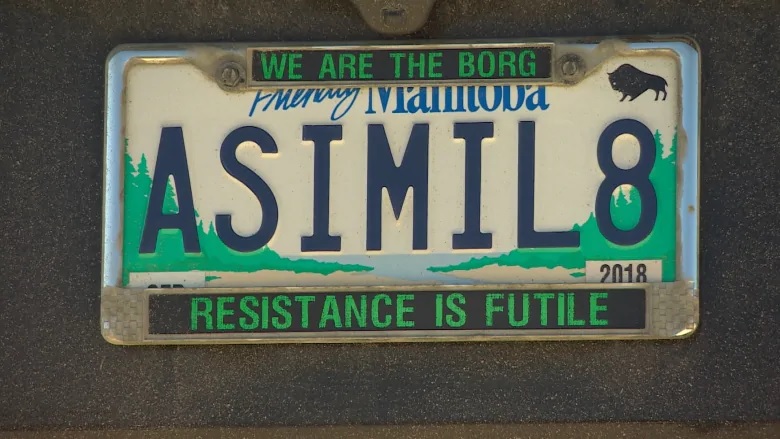 Nick Troller’s Star Trek-themed vanity plate, reading “ASIMIL8,” was recalled by Manitoba Public Insurance in 2017 over claims it was offensive to Indigenous people. He insists it has nothing to do with ethnic or historical issues in Canada. He challenged the decision, and although the court ruled the revocation violated his constitutional rights, Manitoba was nevertheless justified in revoking the slogan (CBC)

A similar case is ongoing in Nova Scotia where Mr. Lorne Grabher’s plate with his family name is awaiting a decision after challenging the provincial revocation of his plate. The province said it had received an anonymous complaint in 2016 that the plate was “hateful” towards women. A decision in an initial challenge to the recall said that although it was his family name, that context wasn’t available to anyone viewing the plate. The decision on appeal is expected shortly

As examples of unacceptable plates in that province. TUTH DR, and DR NURS  (tooth doctor, doctor nurse) are rejected as implying official authority. IPA, KANNABIS, RUMRUNNR, reference drug or alcohol use and are banned,  DAWIFE is derogatory and HOTNAN, banned as being in poor taste, as are RZNHELL, while H82LUZ (hate to lose) is banned as promoting street racing.

In most cases, provinces follow similar rules. For example, Ontario states that vanity plates  will be not accepted if they contain sexual or eliminatory references, abusive or vulgar terms or slang in any language, have a religious meaning or use of religious title, references to drugs or alcohol, political opinions, references to criminal activity or violence, anything racist, and letter and number combinations that can make the plate difficult to read by police.