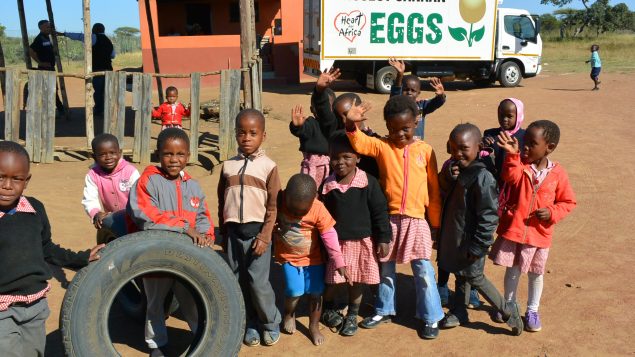 SaskEgg supports the Heart for Africa's Project Canaan project and recently got together to purchase an egg delivery truck that allows eggs and meal packs to be delivered to thousands of children and families across Eswatini (formerly Swaziland) every week. (Egg Farmers of Canada)

Not all of it… But as much as you can spare to help them care for more than 250 orphans and abandoned babies at their orphanage in Eswatini (formerly known as Swaziland) and the 2,500-acre farm that produces food for a network of 30 churches and schools in the tiny Southern African kingdom.

In their quest to feed their orphans, the Maxwell’s and their Heart for Africa charity have partnered with Egg Farmers of Canada, which manages Canada’s egg supply and represents egg producers.

Tim Lambert, CEO of Egg Farmers of Canada, said he was so impressed by the story of the Canadian couple, their work with orphans and their Project Canaan Farm when he first heard it several years ago that he decided to visit them in Swaziland, as the country was known before it changed its name to Eswatini in 2018.

“We were amazed at what they had already achieved with their 2,500-acre farm, with the orphanage for children and also with community feeding programs,” Lambert said in a phone interview from Ottawa, where he was hosting the Maxwells, who are in Canada as part of their month-long fundraising tour of North America.

“Malnutrition in the country is a huge problem, the country has been devastated by HIV/AIDS and within that they’ve lost a generation of adults,” Lambert said. “So there is, if you can believe it, a half a million orphans and vulnerable children in the country, that’s more than half of the population of the entire nation.”

(click to listen to the full interview with Tim Lambert, Janine and Ian Maxwell)

The partnership between Egg Farmers of Canada and Heart for Africa was announced in late 2014 and since then Canadian egg farmers have helped locals build an entire egg farm from the ground up, Lambert said.

The farm now has 5,000 hens in two houses, offers fresh eggs to thousands of people in the community and is providing a locally produced protein that’s essential for human growth and development, Lambert said.

The Egg Farmers of Canada also got help from other industry partners, such as Sanovo, a Danish company that donated equipment to hard cook and chill the eggs, and the Saskatchewan Eggs Producers donated a delivery truck for the operation, Lambert said.

“We’re able to distribute over 4,000 eggs every day and to date we’ve distributed over five million eggs,” Lambert said.

The eggs are distributed in some of the most remote subsistence farming communities in Eswatini, said Janine Maxwell, who grew up in Northern Ontario.

“We have been in a drought for the last two-and-a-half years and we still don’t know whether the rains are coming so they haven’t even been able to plant their maze crops, which is their staple, for the last few years,” Maxwell said.

“We had already been running this feeding program with these 30 partners and feeding local children but we’re seeing more and more children coming into the program because there is no food at home, and there is no food in the schools.”

Each child gets a hard-boiled egg along with their nutritious MannaPack meals provided by the U.S. charity Feed My Starving Children, she said.

Maxwell said she was heartbroken hearing the stories of orphaned children during her travels through Africa. A former marketing executive, she travelled to Africa in “search for the meaning of life” after witnessing the 9/11 attacks during a business trip to New York that eventually led her and her husband, Ian, to re-evaluate their lives’ priorities.

“That search took me to Africa and I fell in love with the people, I fell in love with many of the countries I travelled to but my heart was specifically touched for these orphans, these children who have been orphaned because of HIV/AIDS,” Maxwell said.

She met hundreds of these orphaned children who were living on the streets in every country she visited, Maxwell said.

“And I just knew I couldn’t go back to my life of leisure and pleasure, I had to do something.”

After working on various projects in Eswatini since 2005, the Maxwells packed up their belongings and with their two children in tow moved there permanently in 2012, shortly after opening their orphanage for abandoned children.

“I married a strong woman and I followed her,” said Ian Maxwell, who was born in Ottawa and grew up in Nepean. “It’s a beautiful country but the people were really, really sick.”

“While many charities are well-intentioned, it’s not always easy to deliver success in developing parts of the world,” Lambert said. “And because of their business background, they’re able to think, plan, design, but then also execute on their plans. Things get done!”