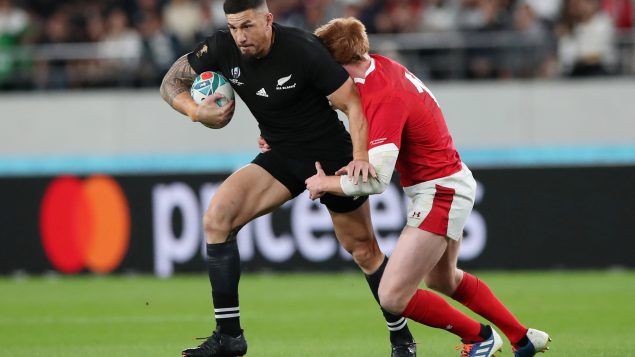 New Zealand rugby star Sonny Bill Williams shown in the All Blacks' victory over Wales in the bronze-medal match at the Rugby World Cup in Tokyo has signed with the Toronto Wolfpack. (Peter Cziborra/Reuters)

Toronto Wolfpack, the only professional rugby league team in Canada, confirmed on Thursday that All Blacks star Sonny Bill Williams will join the team for the next two years, without revealing the terms of the contract.

According to an anonymous source, the 34-year-old player will receive $9 million during this period and will also have shares in the team, says Radio-Canada.

“Sonny is a phenomenal athlete. He is the LeBron James of rugby. His entry into our league is similar to David Beckham’s with the Los Angeles Galaxy,” said team president Bob Hunter in a statement.

This contract marks a shift for the player who just finished third with New Zealand’s All Blacks at the rugby union World Cup in Japan.

A post shared by Toronto Wolfpack (@torontowolfpackofficial) on Nov 7, 2019 at 11:02am PST

Rugby union consists of teams of 15 players, unlike rugby league where teams are composed of 13 players. The rules also differ between the two codes.

Williams might be best known worldwide for his exploits in the 15-man game, but he has long been player of renown in rugby league.

During his league career he won two National Rugby League titles in Australia – first with Canterbury Bulldogs in 2004 and again in 2013 with Sydney Roosters.

In addition to being an incredible rugby player, he also tried professional boxing between 2009 and 2015, winning all seven of his fights.

With the arrival of such a star on Canadian soil, many will wonder how important this sport is here and whether William’s arrival will change the face of rugby league in Canada. These are the questions I asked Bob Jowett, President of the Canadian Rugby League Association (CRLA):

As Jowett says, Rugby League is not yet well developed in Canada. However, the fact that the Ravens, Canada’s national women’s team, will be competing in the 2021 World Cup in the United Kingdom as well as the arrival of Sonny Bill Williams could already make a significant difference.

The Ravens are the first team from Canada to compete in the Women’s Rugby League World Cup.

Bob Hunter, President and CEO of Toronto Wolfpack, also believes the All Black player could contribute to the growth of rugby league in Canada.

The excitement he will bring to the sport of rugby league in this country will be incredible.Bob Hunter, Toronto Wolfpack Chairman and CEO

“Having someone of his talent join the Wolfpack will greatly raise the profile of the club, and also help move the game forward globally,” added Hunter.

More than Canada itself, the arrival of Sonny Bill Williams is considered by some to be a real step forward for rugby league in the northern hemisphere as the current head coach of the Australian National Rugby Team (Kangaroos), Mal Meninga, said in a news release.

“Sonny Bill Williams will provide an immediate impact for rugby league in the Northern Hemisphere and for the development of rugby in North America.”

The Wolfpack, a club owned by Australian mining tycoon David Argyle, have made Williams one of their two permitted marquee players on a deal believed to be worth $9 million over two years.

If the amount is confirmed, it will make him the highest paid player in the history of either code, rugby league or rugby union, but his marquee status means that only the first $250,000 of his salary will count towards the club’s salary cap.

Created only three years ago, the club has moved up through the lower, semi-professional leagues on a fully professional budget to reach Super League and become the first North American side to play in the competition.

People will be able to watch Williams play in Toronto early in the season, but the team will then travel to Europe for the rest of the competition due to weather conditions.

The Toronto Wolfpack was promoted at the end of last season to Super League, the best league in the northern hemisphere with 10 English and one French team.

RCI with Radio-Canada and BBC