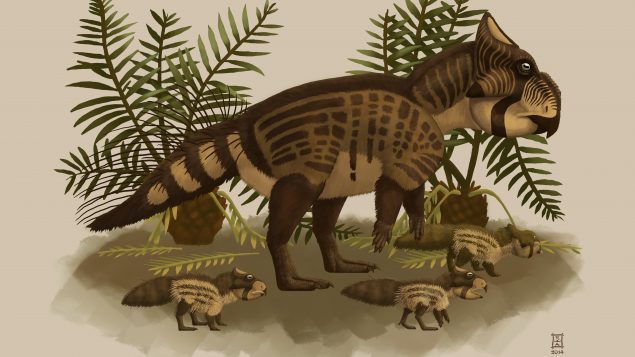 A Ferrisaurus is seen in this undated illustration. A geologist's discovery of a mysterious claw in rocks along a rail line in British Columbia's northern wilderness almost 50 years ago has led to the recognition of the first dinosaur species unique to the province. (Raven Amos/Royal BC Museum via the Canadian Press)

This is not the first time dinosaurs have been found in British Columbia, but none of them have been unique to the province… until now.

A mysterious claw discovered by a geologist in a rock along a railway line in the Western Province almost 50 years ago led to this conclusion.

Before it had a scientific name, and we were pretty sure it was a new species, we needed something to call it and Buster seemed to be a good fit for a couple of old bones from the Sustut River.Victoria Arbour, Royal B.C. Museum's curator of paleontology

Ferrisaurus sustutensis, which means “iron lizard of the Sustut River”, is the exact name of the species, according to Arbour. It originated from its location along the Sustut River north of Smithers, B.C.

The bones were collected along the BC Rail line near the intersection of Birdflat Creek and the Sustut River in 1971, in the Sustut Basin of northern British Columbia, Canada. ( 10.7717/peerj.7926/fig-1)

“I think it’s really exciting that Ferrisaurus is a new species from B.C. because B.C. isn’t a place that is really well known for dinosaur fossils,” she said. “It really highlights there’s a lot of potential for even more dinosaur discoveries down the road if we look hard enough.”

Arbour and her colleagues studied the bones for years before publishing their finding on Thursday in The Journal of Life and Environmental Sciences.

“We don’t have any parts of the skull but we know, based on the bones we do have, that it was part of the same group of dinosaurs called the leptoceratopsids,” she said in an interview at the museum, where the Ferrisaurus is part of a free public display called B.C.’s Mountain Dinosaur. 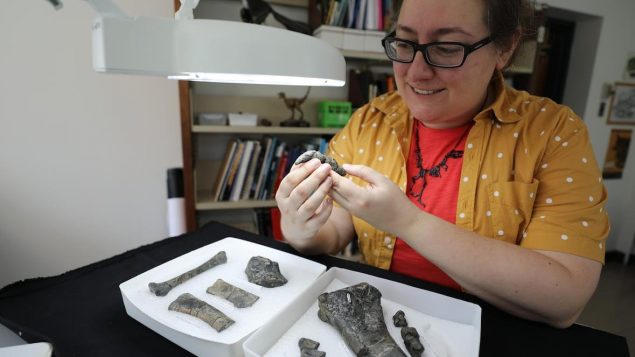 Victoria Arbour looks over items from the paleontology collection at the Royal B.C. Museum in this undated handout photo. (Brandy Yanchyk/Canadian Press)

“They are little cousins of the more famous dinosaurs like Triceratops,” said Arbour.

They had a parrot-like beak, a very short frill and no horns on the face. They were plant eaters and probably walked on four legs but might have been able to get around on two legs sometimes.Victoria Arbour, Royal B.C. Museum's curator of paleontology

With its 1.75 metres long and about 150 kilograms, Ferrisaurus was comparable in size to a large wild boar or a bighorn sheep, says the curator.

She also said that such dinosaur was prey for many of the large meat-eating dinosaurs, including the notorious Tyrannosaurus rex.

From Nova Scotia to B.C.

Arbour said she first encountered the bones in Nova Scotia as a student at Dalhousie University. She said the man who found the bones, Kenny Larsen, kept them for years but eventually donated them to the university.

The bones then made their way from Nova Scotia to the Royal B.C. Museum, where Arbour was later hired as curator of paleontology and embarked on her dinosaur species discovery.

Arbour found new fossils at the Substut River site when she led an expedition in 2017. She is now planning on going back there this summer to look for more dinosaur fossils.