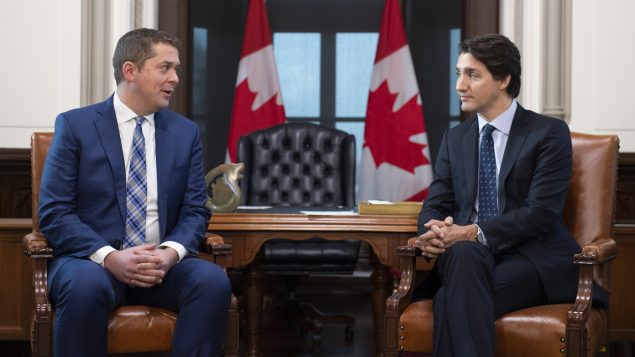 Canada’s parliament to reconvene on Dec. 5

A new session of Parliament will open on Dec. 5 immediately after the NATO leaders’ summit in London, Prime Minster Justin Trudeau announced Tuesday.

The 43rd session of Parliament will begin with a Speech from the Throne from Gov. Gen. Julie Payette.

The Liberals were reduced to 157 seats in the Oct. 21 election, 13 seats shy of being able to form a majority government, forcing them to rely on the support of other parties in the House of Commons. They also failed to elect any Members of Parliament in Alberta and Saskatchewan.

Trudeau has ruled out creating a formal coalition and will have to work with all the opposition parties on an ad hoc basis to advance the Liberal agenda.

Trudeau made the announcement shortly before going into a closed-door meeting with Conservative Leader Andrew Scheer to discuss the parties’ positions and possible points of collaboration.

“Last month Canadians elected a parliament that they expect to work together and that’s exactly what I’ll be focusing on doing,” Trudeau told reporters. “I’m going to be talking about our priorities this morning of affordability for Canadians, growth for the middle class and the fight against climate change.”

Scheer said he appreciated the opportunity to discuss Conservative priorities for the next session of Parliament.

“This country is more divided than it ever has been, we need to get to work as quickly as possible so we can address the priorities of Canadians and bring our country closer together,” Scheer said.

Trudeau has said his priorities for the minority government’s first few months in office will be to bring in a tax cut “for the middle class”, to introduce legislation to expand medical assistance in dying, and to tackle climate change.

At the same time he has vowed to press ahead with the expansion of the controversial Trans Mountain Pipeline project, which is opposed by the NDP, the Greens and the Bloc Québécois, potentially forcing Trudeau to seek the support of the Conservative Party.