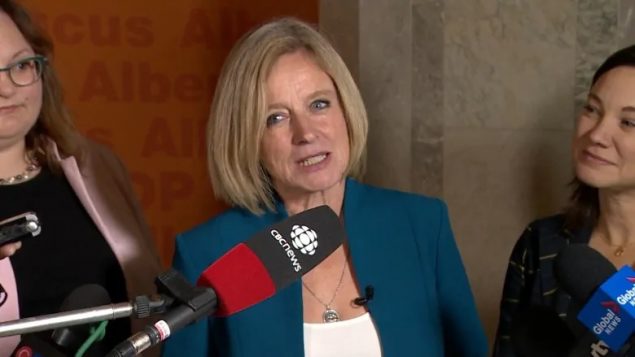 Alberta NDP Leader Rachel Notley (pictured in October) was expelled from the Alberta legislature for one day on Tuesday after refusing to apologize for a statement she made about a controversial bill introduced on Monday. (Nathan Gross/CBC)

NDP Opposition Leader Rachel Notley was expelled from Alberta’s provincial legislature on Tuesday after refusing to apologize for comments she made about a controversial bill.

The legislation, introduced Monday, would fire Alberta’s Election Commissioner, Lorne Gibson, in the middle of his investigation into the 2017 leadership race of the United Conservative Party.

The race was won by Jason Kenney, whose UCP went on to defeat Notley’s left-of-centre NDP in the oil-rich province in an election this spring.

Tensions between Kenney and Notley have long been simmering and things finally boiled over Tuesday when Notley posed a question about the proposed legislation, known as Bill 22.

When UCP House Leader Jason Nixon said “no one is firing anyone,” Notley accused Nixon of making misleading statements.

When Speaker Nathan Cooper directed Notley to apologize, she refused. 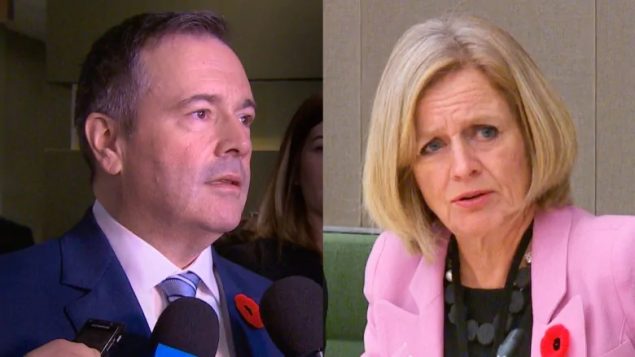 Jason Kenney and Rachel Notley are not the best of friends. (Manuel Carrillos/CBC)

“We see a corrupt act to interfere with an investigation in this house and we must be able to call it what it is,” Notley said.

“I’ve never seen a threat to this house like Bill 22, not in the province’s history.”

Picking up her books, Notley, escorted by the sergeant-at-arms, left the house as colleagues banged on their desks in support.

Members of the legislature are not permitted to make allegations that another member is lying or misleading the house.

Normally, the issue is resolved when an MLA apologizes and withdraws their remarks at the request of the Speaker.

Notley and the NDP won a stunning upset victory in Alberta 2015, ending 44 years of Progressive Conservative rule, but fell back to earth this past April when the UCP, formed from a merger between the PCs and the Wildrose Party, won a majority with nearly 55 per cent of the vote.