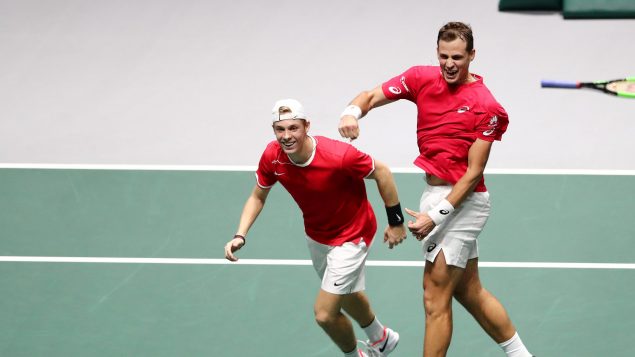 Denis Shapovalov, left, and Vasek Pospisil celebrate after winning their doubles match against Australia's John Peers and Jordan Thompson on Thursday. The victory put Canada through to the semifinals at the Davis Cup in Madrid. (Sergio Perez/Reuters)

For just the third time since the competition began in 1900, Canada has made it to the semifinals of the Davis Cup.

The second time was 100 years later.

Now, they are there again–at the revamped competition in Madrid.

The victory over the Australians was Canada’s third of the week, following wins against Italy and the U.S.

Next up is Russia on Saturday.

That the Canadians are this far is due in no small measure to the resurgent  Vasek Pospisil, a late replacement for Felix Auger Aliassime, who is sidelined with an ankle injury.

Plagued by injuries since 2014 when he was ranked No. 25 on the ATP computer and won the Wimbledon Men’s Doubles title with American Jack Sock, Pospisil had battled to shake the injuries’ effects and find a return to form.

In August at the U.S. Open in New York, Pospisil did both: appearing to find something he had been missing for quite a while–the ability to find a way to win–when he defeated the ninth-seeded Karen Khachanov of Russia in five very tough sets. 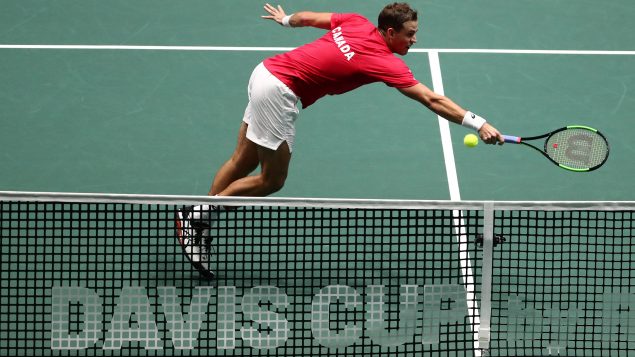 Pospisil has been in top form since his five-set victory against Karen Khachanov of Russia at the U.S. Open in August. (Sergio Perez/Reuters)

Since then, Pospisil made it to the round of 16 at the Shanghai Masters and won two lower-tier Challenger events.

This week in Madrid, he has not lost a set.

Whatever happened that early evening in New York is hanging around in Pospisil’s soul and psyche.