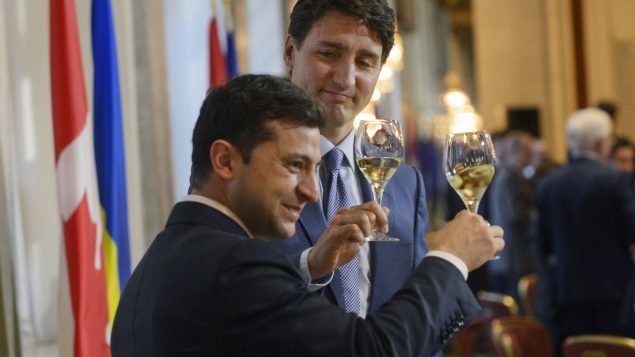 Prime Minister Justin Trudeau spoke with Ukrainian President Volodymyr Zelenskiy who called on Friday to congratulate the Liberal leader on his re-election.

Trudeau reaffirmed Canada’s “steadfast support for Ukraine’s sovereignty and territorial integrity,” said a readout of the call released by the Prime Minister’s Offices.

The two leaders discussed progress in the implementation of the Minsk Agreement to end the conflict in the Donbas region of Eastern Ukraine, as well as recent confidence-building measures such as prisoner exchanges between Russia and Ukraine.

Russia on Monday handed back three naval ships it captured last year to Ukraine, something Kyiv wanted to happen before a four-way peace summit on eastern Ukraine next month in Paris.

The handover, confirmed by the two countries’ foreign ministries, occurred in the Black Sea off the coast of Crimea, which Russia annexed from Ukraine in 2014.

Russia returned the sailors who had been on board the ships to Ukraine in September as part of a prisoner exchange deal.

The leaders of France, Germany, Russia and Ukraine – members of the so called Normandy Format –  will meet in Paris on Dec. 9 in an attempt to advance efforts for a peaceful resolution to the conflict in eastern Ukraine, the French presidency said last week.

More than 13,000 people have been killed in the more than five-year-old conflict in east Ukraine between pro-Russian separatists and Ukrainian government forces.

Relations between Ukraine and Russia collapsed following Moscow’s annexation of the Crimean peninsula, which prompted Western sanctions. Zelenskiy won a landslide election victory in April promising to end the conflict and sweeping reforms to curb corruption and grow Ukraine’s economy.

Trudeau also welcomed advances made by Ukraine on key reforms and pledged Canada’s continued support for these efforts going forward, the readout from the PMO said. Trudeau and Zelenskiy also discussed the upcoming NATO Leaders Meeting.

The two leaders met in July in Toronto on the sidelines of the the Ukraine Reform Conference hosted by Canada.