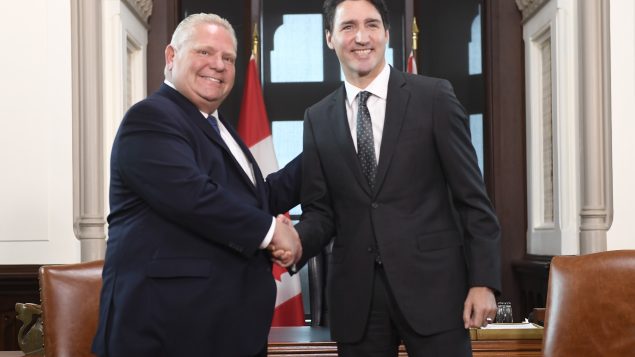 Canadians need to put aside their differences and focus on things that unite them Ontario’s Progressive Conservative Premier Doug Ford said Friday after meeting with Liberal Prime Minister Justin Trudeau in Ottawa.

It was the first meeting between the premier of Canada’s largest province and Trudeau since the end of the Oct. 21 federal election that saw the Liberal leader attack Ford’s policies in Ontario to scare Canadians away from voting for the federal Conservatives.

During a news conference following what he called a “phenomenal” meeting with Trudeau, Ford said he never took those attacks personally and now was the time “to roll up our sleeves and start working together.”

Ford warned that deepening regional divisions are bad for business and the economy.

“We have to send a message around the world that yes, we’re a big family and we may have a few bumps in the road, we may disagree, but we have to give businesses out there certainty. Because if you don’t give businesses certainty, they’ll leave,” Ford said.

“They’ll leave and invest in other areas and we want them to stay here. It’s absolutely critical we unite the country and we stick together.”

Ford told Trudeau the federal government needs to listen to the concerns of people in Saskatchewan and Alberta because “they are hurting out there.”

Ford said he looks forward to gathering with other premiers in Toronto on Dec. 2, where he hopes they can “lower the temperature and again stick together as a country.”

The meeting with Ford was part of the outreach by the Trudeau government since the Liberals were reduced to a minority government in the Oct. 21 election. The Liberals failed to elect any legislators in the Western provinces of Alberta and Saskatchewan among rising discontent with their energy and climate policies in Western Canada.