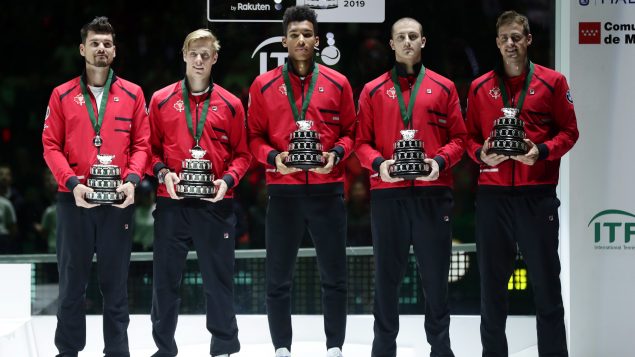 The Canadian team poses with their second place awards Sunday in Madrid, after losing to Spain in the Davis Cup final in (Manu Fernandez/AP Photo)

Canada’s intoxicating run at the revamped Davis Cup competition came to an end Sunday in Madrid.

Spain won both singles matches in the tournament’s final tie, making the doubles unnecessary, and giving the Spaniards the championship, their sixth title.

The result was not especially surprising, given that World No. 1 Rafael Nadal played No. 15 Denis Shapovalov and World No. 9 Robert Bautista Agut played No. 21 Felix Auger-Aliassime.

Shapovalov, who is 20, and Auger-Aliassime, who is 19, hung tough against their more experienced opponents (Bautista Agut is 31, Nadal is 33), but in the end they lacked the games–at least on this day–to prevail in front of a packed house of spectators pulling for the other side.

Auger-Aliassime, replacing the finally-spent Vasek Pospisil, who lost just one singles match all week, stayed close in the first set before falling 7-6 (3), 6-3.

Shapovalov played a terrific second set, but Nadal was not about to lose his final match of the year–certainly not at home.

On Saturday, the Canadians defeated the Russians to advance to the final as Pospisil, who is coming back from a serious back injury, and Shapovalov prevailed in the doubles.

The victory over Russia followed wins against Italy, the U.S. and Australia.

Sunday’s final marked the end–finally–of the 2018 professional tennis season, one that virtually every Canadian tennis fan will tell you was Canada’s best ever–marked especially by the sensational emergence of World No. 5 Bianca Andreescu and her three tournament victories, including the U.S. Open.

To discuss Canada’s Davis Cup run, what it might mean for the future, and the year that was, I spoke with Stephanie Myles, editor-in-chief at Tennis.Life, who has been in the thick of it all since January, generously sharing her insights throughout the year with RCI.