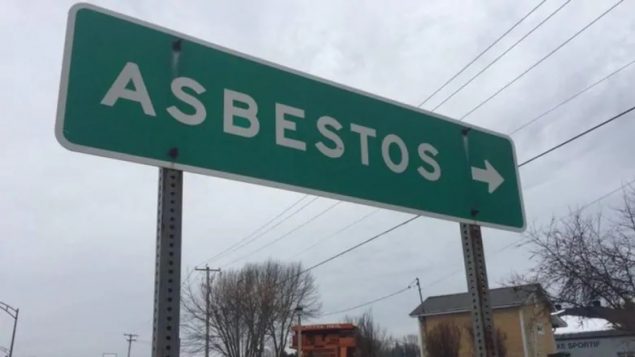 The sign welcoming people to the town. A new name will be determined next year (Jean-François Dumas-Radio-Canada)

What’s in a name? Town of Asbestos to be renamed

The Quebec town of Asbestos said it’s had enough.  Officials say the negative association with the mineral and its now bad reputation as a health hazard, is hurting the town. 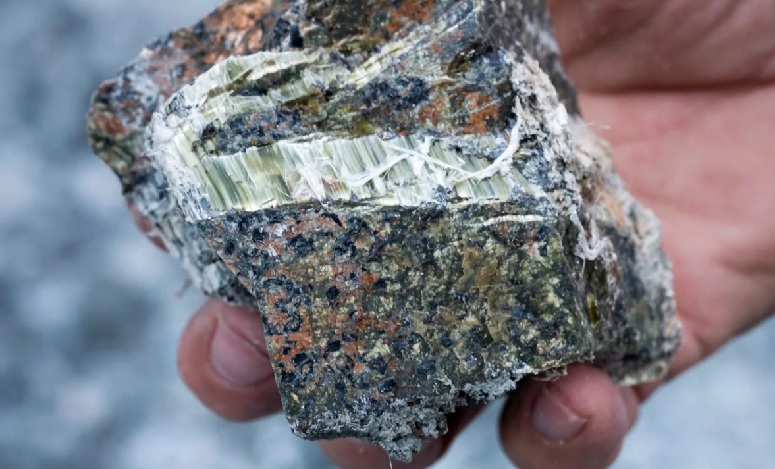 A small chunk of the chrysotile asbestos found at the Jeffrey mine showing the fibrous nature of the mineral, now long deemed to present a health hazard (Paul Chiasson-CP)

In a telephone interview with a CBC reporter, the mayor says industries and businesses won’t set up in the area because they don’t want their names associated with the town and the mineral.

The town announced this week that it will be seeking to change their name. 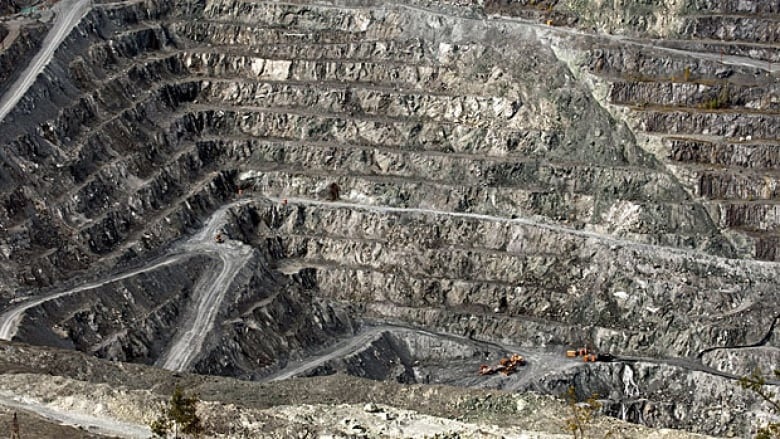 The huge open pit mine was in its time, the largest asbestos mine in the world (|Jacques Boissonot-CP)

The name is not an issue locally because “amiante” is the French word for the mineral, but asbestos, the English word, is of course very well known worldwide, and no longer as something positive. 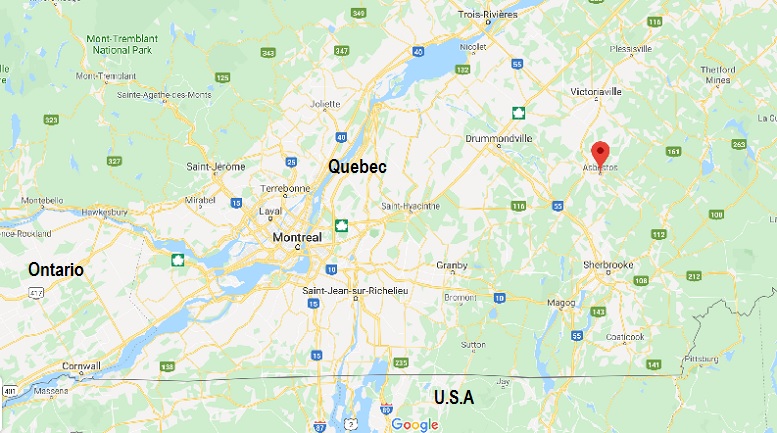 The town of Asbestos in the Eastern Townships region of Quebec about 150km east of Montreal, Another huge mine was located about 70km further east in Thetford Mines, now also closed. (Google)

The silicate mineral asbestos has been used for thousands of years in the making of cloths, as fireproof lamp wicks, and in recent history as fireproof insulation, brake and clutch pads, and many other applications 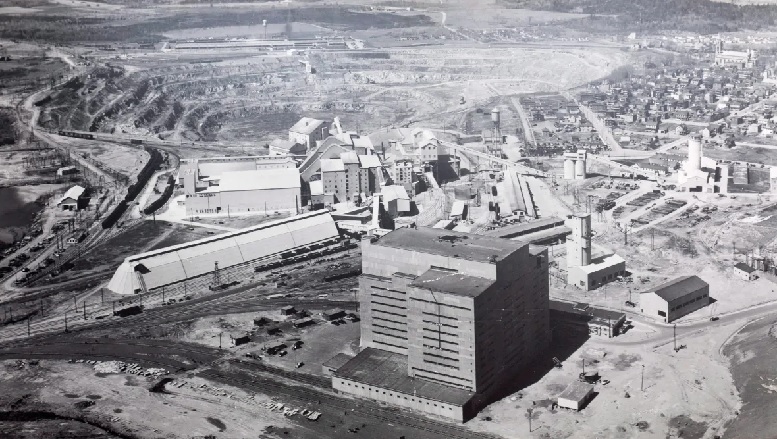 In the industrial age it became popular and a huge mining industry sprang up in the eastern townships of Quebec in the 1870’s, with the Jeffrey mine becoming the largest asbestos mine in the world and a booming local economy in the 1960’s. With the product being the main economic driver the town itself had long been named Asbestos. 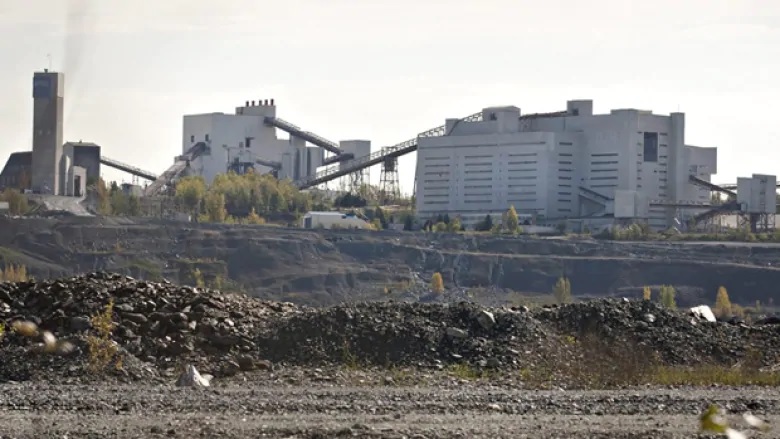 The Jeffrey Mine shown in 2011 just after closing (Jacques Boissonot-CP).

Although health concerns associated with breathing asbestos dust fibres had been raised as far back as the turn of the last century, it was only close to the turn of this century that serious concerns were raised and bans on its use started to appear. 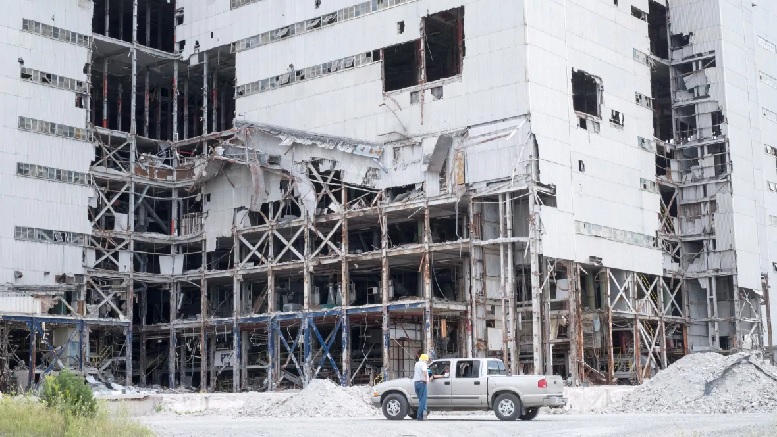 In 2016, the mine buildings began being demolished in the start of a cleanup of the site. (Paul Chiasson-CP)

The negativity around asbestos became such that the two local mines were halted in 2011 and shut down for good in 2012. 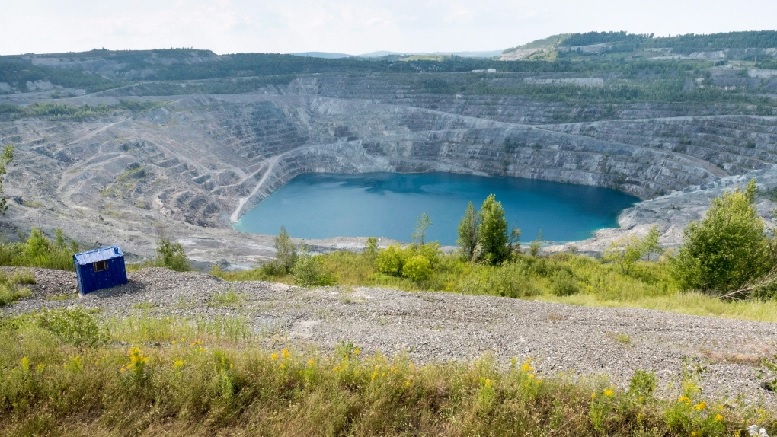 The Jeffrey Mine at Asbestos Qc,, now partially flooded, but the negative association with the mineral now affects the town’s chance to diversify (Paul Chiasson-CP)

The Quebec town hopes that a name change will attract business and jobs to replace those lost when the mines closed. Residents will be consulted about their suggestions for a new name with a decision in 2020.