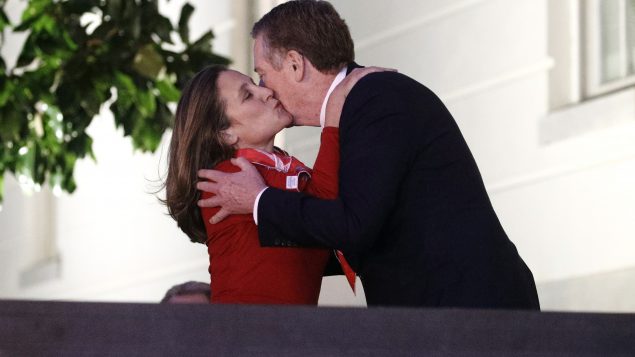 Deputy Prime Minister Chrystia Freeland says she and her American and Mexican counterparts are determined to push their new trade agreement, known officially as the USMCA and unofficially as the new NAFTA, “across the finish line.”

Freeland made the comments in Washington on Wednesday, telling reporters that all sides have pledged to one another to continue discussions–either in person or over the phone–to reach a deal.

Following an evening meeting with U.S. Trade Representative Robert Lighthizer and Mexican Undersecretary for North America Jesus Seade, Freeland did not share details of the discussions or say how long the ratification process might take.

“These negotiations always take as long as they take,” she said shortly before leaving to fly back to Canada.

“Today, from the Canadian perspective, was a good meeting. Good work is being done,” 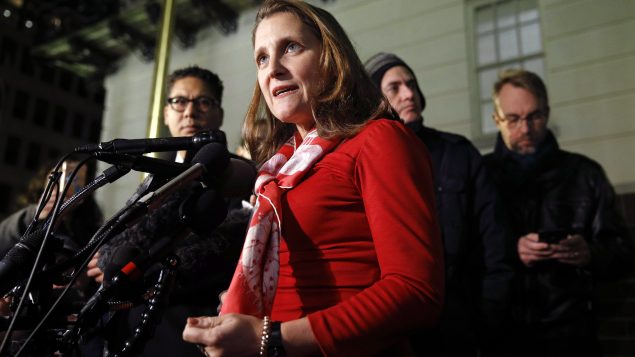 Freeland met the press following her meeting with Trade Representative Lighthizer but shared no specifics of their conversation. (Patrick Semansky/AP Photo)

Freeland’s trip comes as the U.S. Congress, which must ratify the agreement, appears to be moving closer to being ready to conclude negotiations on adjustments to the deal, which was reached in September 2018.

So far, only Mexico has ratified the agreement.

Ottawa has said it will move “in tandem” with the Americans on ratification.

Democrats in Congress want to strengthen several of the agreement’s provisions.

These include improved labour standards to ensure that work force reforms can be enforced.

Labour leaders in the U.S. and Canada say that without strong enforcement measures, the minimum wage provisions and higher labour standards in the revised NAFTA could be meaningless.

The Trump Administration has yet to release a text of the legislation Congress will vote on, so business and labour groups don’t have details on how Trump’s team and Democrats are attempting to bridge their differences.

Talks are set to continue over “the next few days,” Freeland said.