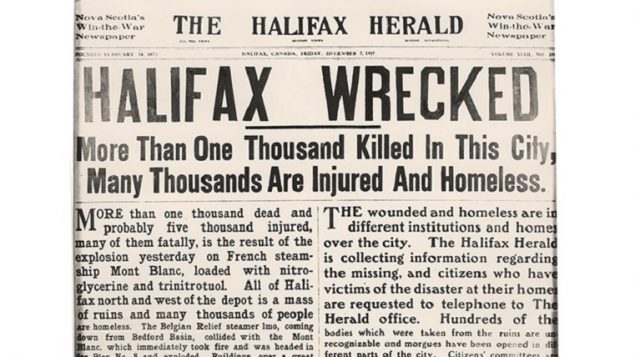 Newspapers across N American carried headlines of the massive explosion. This was the Halifax paper of Friday Dec 7, 1917 (via Canadian Red Cross)

It was December 6, 1917 and deadly war in Europe still dragged on with its massive destruction and horrific toll in lives.

Canada’s east coast port city of Halifax, Nova Scotia, had become a main staging point for the war effort and for years now had been a daily hive of activity and with dozens of ships waiting to leave, others to enter, and still others being loaded with supplies, munitions, and soldiers heading to the war. The main base of the Canadian Navy, and an important army garrison, Halifax had literally doubled in size during the war years.

This day dawned like many others  and once the anti-submarine nets had been removed at the entrance to the “narrows” the heavy ship traffic started to move in and out of the harbour. People of course were beginning their day either already at work in factories and warehouses down by the shore or heading out for daily chores, or busy in their houses. 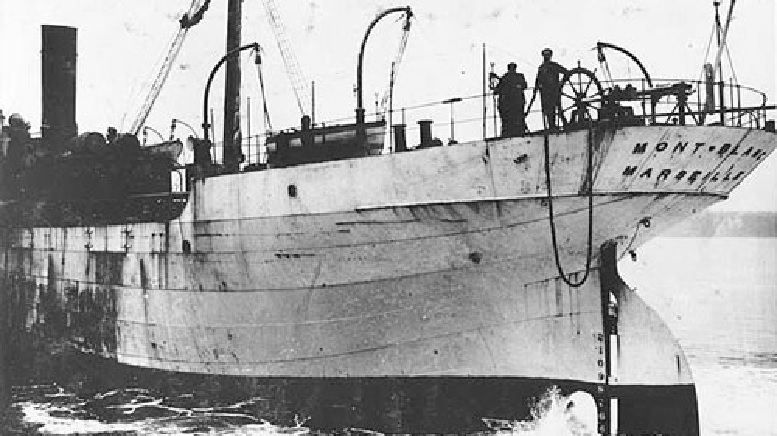 Early in the morning of the 6th, after the anti-submarine nets at the entrance to the “narrows” were lifted,  a Norwegian ship, Imo, chartered by the Belgian Relief Commission, began slowly moving down the harbour and into “the narrows” on its way outbound to New York to pick up relief supplies.

At the same time a fully loaded French munitions ship, Mont Blanc made its way up into the narrows up towards the Bedford Basin toward its eventual assigned station in a convoy being formed which was later to sail to Europe.

The Mont Blanc was loaded to capacity with a extremely dangerous cargo, both below and on deck.

The anti-submarine net across Halifax harbour in WWI. It was installed each night and removed each morning. Ship traffic could only move in and out of Halifax after the net had been moved out of the way for the day ( Nova Scotia Archives NSARM)

The mostly empty Imo, was sitting high in the water and difficult to steer and as it moved down the harbour. It was forced toward the Dartmouth shore to avoid a ship travelling up the narrows on the wrong side, and then still further toward the Dartmouth side to avoid other traffic, This put it in line with the incoming Mont Blanc in the long narrow channel between the sea and the harbour itself. 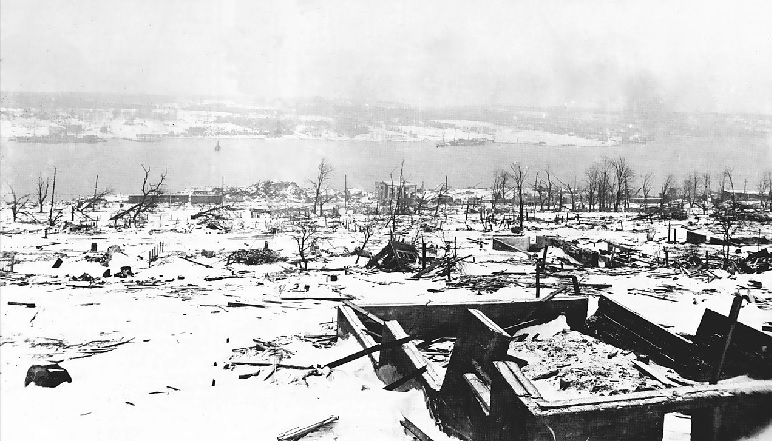 A view across the devastated neighbourhood of Richmond in Halifax, Nova Scotia after the Halifax Explosion, looking toward the Dartmouth side of the harbour. The steamship Imo, one of the ships in the collision that triggered the explosion can be seen aground on the far side of the harbour (William James-NSARM DNDHfxExplosion-2)

As they approached, both signalled that they had the right-of-way.

December 6 will forever be known as one of the worst domestic tragedies in Canada. It remains one of the biggest man-made, non-nuclear explosions in history. Halifax historian Jay White wrote in his 1994 book Ground Zero: A Reassessment of the 1917 Explosion in Halifax Harbour, that there have been dozens of similar incredibly huge explosions, often connected with war and munitions, with huge destruction and loss of life in locations around the world. He concluded however that, “Halifax Harbour remains unchallenged in overall magnitude as long as five criteria are considered together: number of casualties, force of blast, radius of devastation, quantity of explosive material, and total value of property destroyed.”

As they continued on course, both captains finally realized the other was not yielding and a collision was imminent. The Imo stops engine and shifts to reverse as the Mont Blanc takes what it hoped was an evasive turn towards the Halifax shore in front of the Imo, But, sitting high in the water, the Imo’s prop has limited effect on the forward momentum. Tragically, the reversed thrust instead caused the bow to swing into the munitions ship.  The two ships collided at slow speed, but with enough impact to leave a gouge in the French ship knocking over the piled barrels of fuel and explosives on the deck.

An enormous floating bomb- on fire- abandoned, drifting to shore

It was 8;45 in the morning, as the Imo reversed out of the Mont Blanc. The  grinding metal against metal caused sparks to ignite the extremely volatile benzol spilled from the toppled barrels. 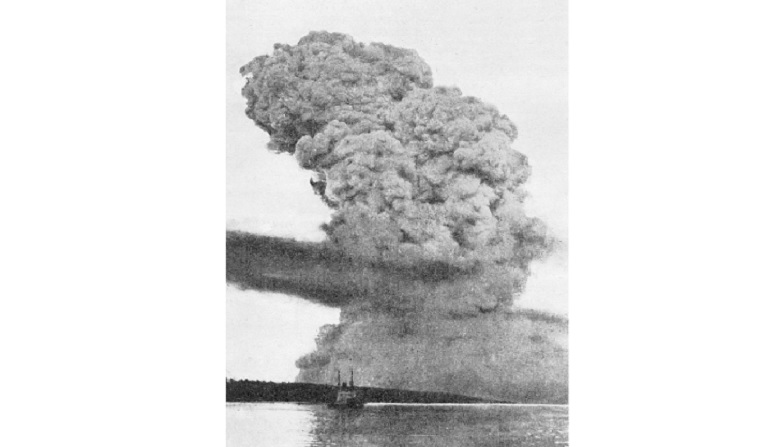 The French ship’s crew makes an attempt to quench the fire which grows quickly out of control.

They hastily abandon ship knowing the danger but their shouted warnings, probably in French, go unheeded, or not understood perhaps because of language differences or simply the distance and noise of the busy harbour.

Normally a munitions ship would have been flying flags indicating the dangerous cargo, but in wartime this would have made it a prime U-boat target, so no flags, and again no general awareness of the extreme danger as the now burning ship drifts to the Halifax side of the harbour where it comes up against a pier, setting it ablaze.

People begin to gather along both shores to watch the fire aboard what they presumed was a simple cargo vessel.  Firefighters arrived and just as they were setting up, a blinding flash at 9;05 instantly levels most of Halifax while the tsunami created causes widespread damage across the harbor in Dartmouth. 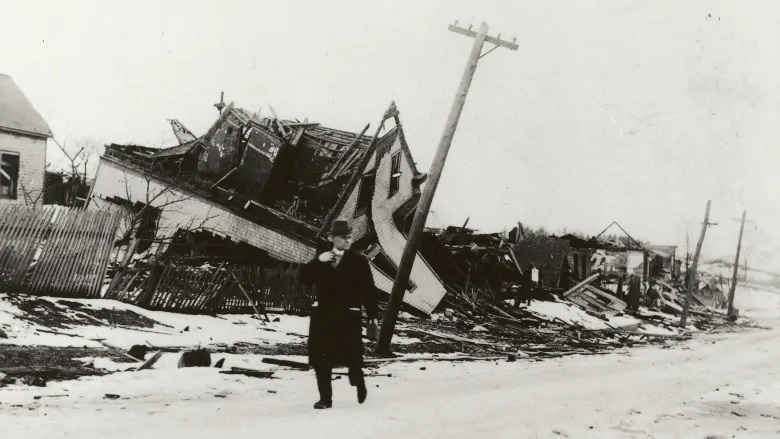 Destroyed homes on Campbell’s Road in Halifax are shown in this 1917 or 1918 photo. Some 25,000 are left homeless many more are blinded by flying glass as they watched from windows blown into millions of shards by the shock wave (Nova Scotia Archives & Record Management/Canadian Press)

Some 2,000 people are killed outright and 9.000 others were injured, many blinded by broken glass as they looked out windows to see the burning ship in the harbor. Some 25,000 will be left homeless.  The number of blinded people led to the eventual creation of the Canadian Institute for the Blind in 1918 which also helped soldiers blinded in the war.

The shock wave even broke windows in Truro 100 km away and was also felt and heard hundreds of kilometers further.

The rescue effort began immediately as far as it could be in the damaged city, but as people and aid began to be assembled to head toward Halifax, the efforts were further hampered by a bitter winter storm which arrived the following day and lasted for several days.

In terms of the combination of property damage and loss of life, it remains the worst disaster in Canadian history.