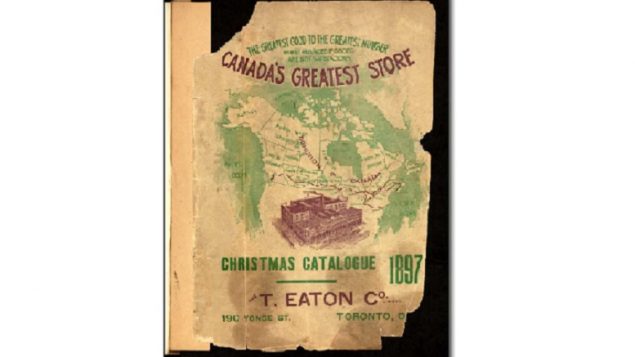 An early Eaton's mail order catalogue of 1897 .The early editions had written explanations of the procedure on how to order the items by mail. For almost a century the Eaton's catalogue full of wondrous, and useful items was eagerly anticipated all across the country (archives of Ontario F 229-231-0-1)

For almost 100 years, the major general merchandise retailer in Canada was the T.Eaton company. Timothy Eaton founded his first department store in 1869 in Toronto. With many of his innovations, the single Toronto store grew to become the largest department store chain in Canada and an iconic Canadian institution with huge stores in several major cities and buyers selecting goods from England, Europe, and the U.S, and contracted manufacturers producing goods specifically for “Eaton’s”. such as home appliances under the ‘Viking’ brand name. 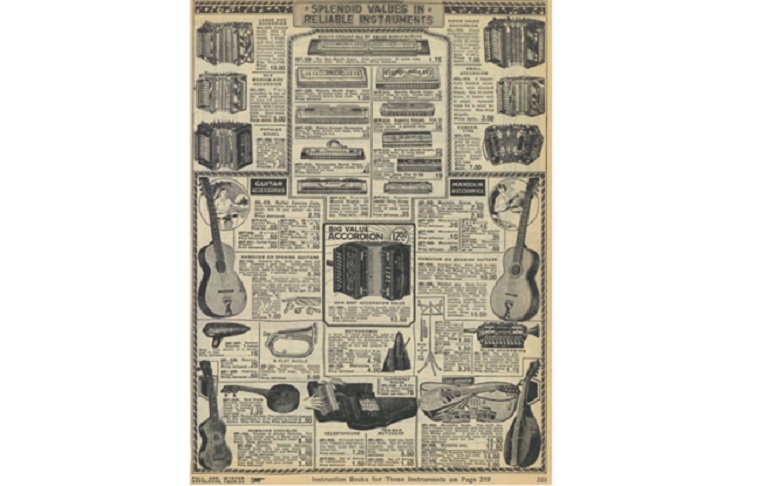 You could literally order almost anything imaginable from the catalogue which became known, especially around Christmas as “the wish book”  From its original 32 page of text, then quickly to illustrations and soon to photos it grew to hundreds of pages. (Provincial Museum of Alberta)

Part of  that “institution” was the mail order catalogue which began in 1884 when the first edition was handed out at the Toronto Industrial exhibition, which later became the Canadian National Exhibition. 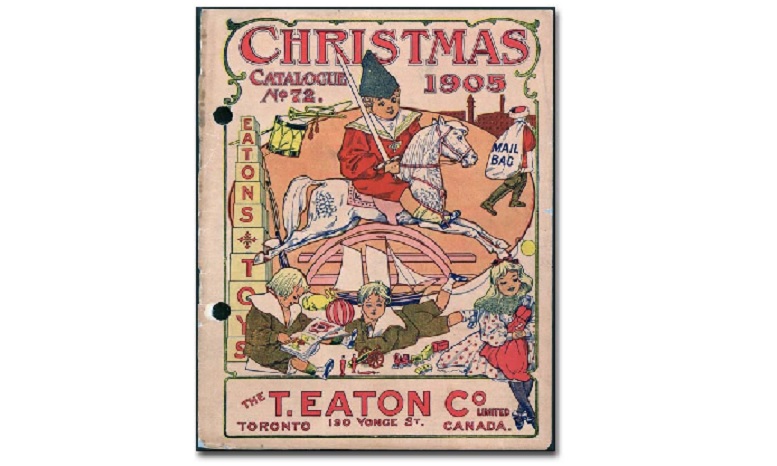 In a country with its widely dispersed population with limited access to stores and a variety of goods, the catalogue offered an enormous variety  which could be had through the mail. To many in remote communities, the variety was at one and the same time a marvel, and marvelous.

Almost anything imaginable could be had in the catalogue, from men’s, ladies, and children’s clothing, fashions, and underwear, to tools, appliances, guns, outboard motors, boats, canoes, horse collars, furniture, door knobs, locks, to toys, why you could even order a house!  Because lumber was scarce in many parts of the Canadian prairies building a house was complicated. A few company’s offered mail order homes, and Eaton’s became a big player providing houses in different styles and sizes with all the lumber needed (and even the nails) precut and delivered to the nearest railway along with an assembly guidebook.

Eaton’s offered a variety of house styles and sizes which could be ordered through the catalogue. All the wood came precut and an assembly guide was included. For a little extra, all the plumbing could be included (City of Edmonton Archives)

Each edition of the catalogue became something people across the country eagerly anticipated, with spring-summer editions,  fall winter editions, and  special Christmas “wish book” editions. 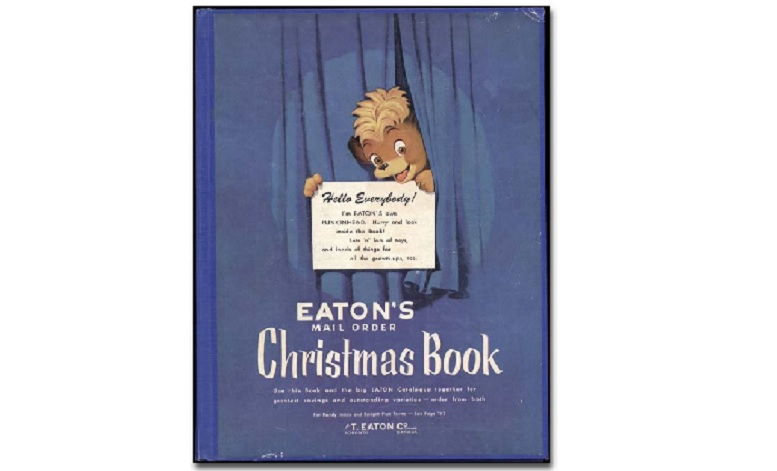 Eaton’s Christmas catalogue of 1954 with Punkinhead. He was a creation for Eaton’s by Canadian artist Charles Thorson who also created “Bugs Bunny, Snow White. Elmer Fudd and others. “Punkinhead” -with his orange hair was Santa’s little helper and Eaton’s marketed children’s books, stuffed toys, and records about the little bear. (Archives of Ontario F 229-231-0-13)

The Eaton’s catalogue became featured in Canadian literature, notably in the famous short story by Roch Carrier called “the Hockey Sweater” in which a hockey jersey was ordered from “Mr. Eaton” but the when the jersey arrived it was for the wrong team with disastrous results. 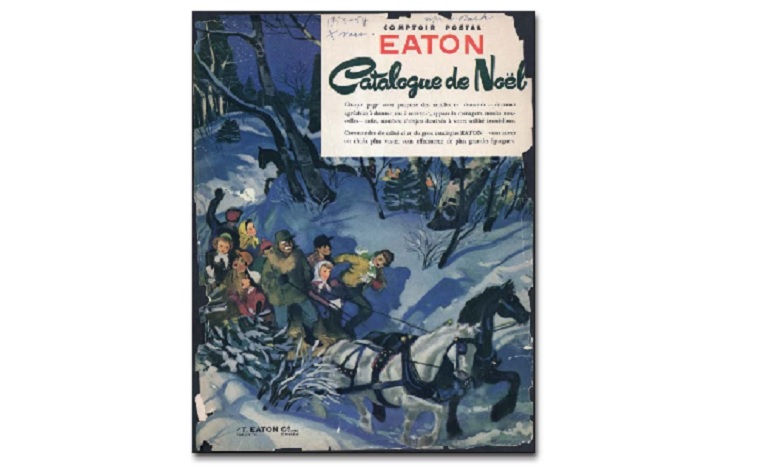 1953-4 edition in French. Realising the market in French, mostly in Quebec but also in communities spread across Canada, French versions began regular distribution in 1927 (Archives of Ontario F 229-231-0-12

But times change, post WWII, more people began a slow move into cities where local stores could provide many of the catalogue items. By the 1960’s the mail order sales began to become unprofitable and the writing was on the wall 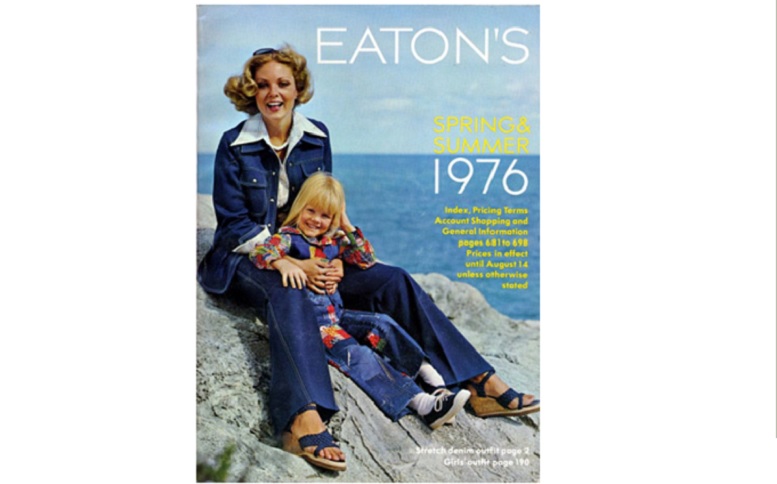 The catalogue ceased publication on this date in 1976, bringing an end to a Canadian tradition, institution, and in part, to a Canadian way of life.

In 1982 Eaton’s cancelled it’s hugely popular annual Santa Claus parade, In 1997, with 90 retail outlets across the country and over 24,000 employees, descendent George Eaton filed for bankruptcy protection Two years later in the face of increasing competition from American operations like Sears, and Wal-mart, and other Conadian chains like Zellers and Canadian Tire, came the end for the chain