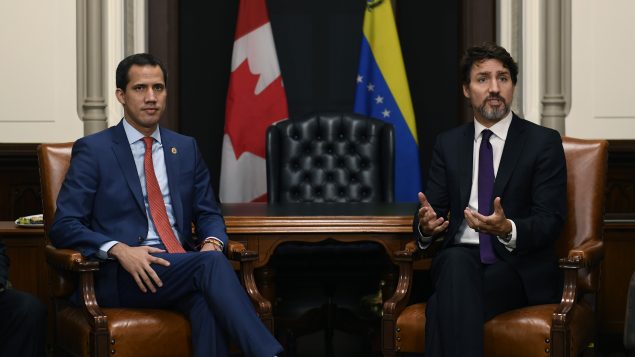 Canada wants to see a “united international approach to resolving the crisis in Venezuela,” Prime Minister Justin Trudeau told the visiting Venezuelan opposition leader Juan Guaidó, who was in Ottawa Monday as part of an effort to drum up international support for the flagging opposition movement.

Guaidó, who proclaimed himself interim leader of Venezuela just over a year ago in an unsuccessful attempt to oust Socialist President Nicolas Maduro, also met with Canadian Foreign Affairs Minister Francois-Philippe Champagne earlier in the day.

Canada is among a group of nearly 60 other nations that have recognized Guaidó as Venezuela’s rightful leader and the Prime Minister’s Office referred to him as the “Interim President of Venezuela.”

But a year after that push, the situation has essentially stagnated. Maduro has managed to hold on to power with help from Russia, China and Cuba and has quashed the fractured domestic opposition.

“The Prime Minister commended the Interim President and the people of Venezuela for their courage, resilience, and tenacity in continuing to push for democracy and human rights in Venezuela,” said a statement released by the PMO.

“The Prime Minister reiterated Canada’s condemnation of the anti-democratic actions and human rights abuses of the Maduro regime.”

Champagne said the situation in Venezuela, a once prosperous and oil-rich country, which has been mired in a political and economic crisis for years, “has gone from bad to worse as a direct result of the actions of the Maduro regime.”

“Millions have fled the country and millions more are living in extreme poverty,” Champagne said.

Guaidó described the pain of families separated from loved ones because of killings and imprisonment, growing poverty, declining health care and the widespread suffering of children. He said international support was crucial to give hope to Venezuelans.

Trudeau reaffirmed Canada’s commitment to addressing the humanitarian needs of Venezuelans and to promoting stability and prosperity in the region, the statement from the PMO said.

“The Prime Minister welcomed the commitment of Interim President Guaidó to holding free and fair elections as soon as possible, in line with the Venezuelan Constitution,” the statement said.

Guaidó thanked Trudeau for “Canada’s role in helping lead the international response to the crisis in Venezuela.”

Canada and members of the U.S.-led Lima Group of nations have been calling on Maduro, who won a highly controversial vote in May 2018, to step down and clear the way for new elections.

Canada has imposed sanctions on Maduro and key members of his government and has also shuttered its embassy in Caracas, while Venezuelan authorities have responded by temporarily closing their consulates in Montreal, Toronto and Vancouver.