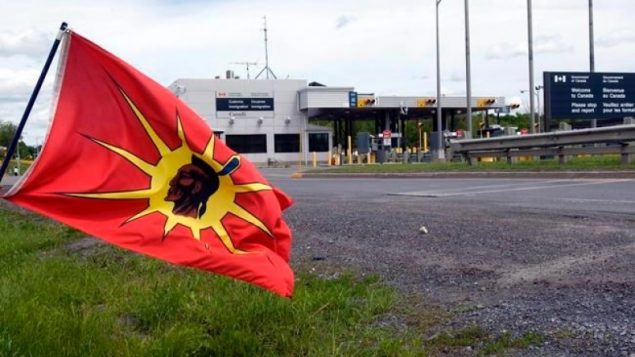 A Mohawk Warrior flag flies in front of the Canadian border crossing station as warriors blocked the Seaway Bridge in the Mohawk community of Akwesasne on Cornwall Island, Ont., on June 1, 2009 during a dispute with the federal government. Federal cabinet has now approved an agreement that will see Canada pay nearly $240 million in compensation to the Mohawks of Akwesasne to settle a 132-year-old land claim. (Ryan Remiorz/The Canadian Press)

A First Nation land claim dispute with Canada’s federal government that dates back decades has been settled.

It involves an approximately 8,000-hectare parcel of land south of the St. Lawrence River in the most westerly portion of the province of Quebec that was allegedly surrendered in 1888 by Mohawks living there.

The land is known today as the Township of Dundee.

Historically, it has been referred to as Tsi:karí​stisere, Kanien’kéha (Mohawk language) for “the place where they drag the iron chains.”

The band long maintained the 1888 surrender was invalid because the Mohawks never intended to surrender it, and in 1981 the Mohawk Council of Akwesasne took legal action, filing a claim asking that the land–which straddles the Quebec, Ontario and New York State border–be returned. 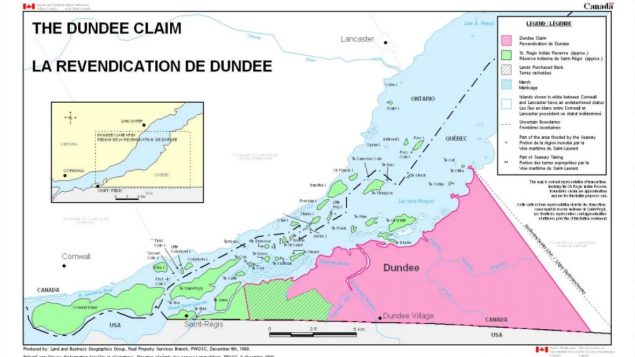 The settlement is for approximately 20,000 acres of land now in the Township of Dundee, located in the most western portion of Quebec. (Submitted by the Mohawk Council of Akwesasne)

(Relations between Ottawa and the Mohawks have not always run smoothly. In 2009, authorities shut down a border crossing into the United States at Cornwall, Ont., after Mohawk leaders from Akwesasne warned they would not tolerate guns in their community.)

In 2015, the federal government offered to settle for just under $240 million and offered to give the community the right to add up to 18,282 acres of land to the Akwesasne reserve, if the First Nation bought parcels of land on an open market.

A 2018 referendum ended with almost 80 per cent voting to accept the agreement.

However, only 28 per cent of eligible voters participated, and five appeals were filed by members of the Akwesasne community.

In January, the last of the appeals was dismissed in court.

On Feb. 29, the federal cabinet authorized Crown-Indigenous Relations Minister Carolyn Bennett to sign the settlement–known as Dundee Settlement Agreement–on behalf of the government of Canada.