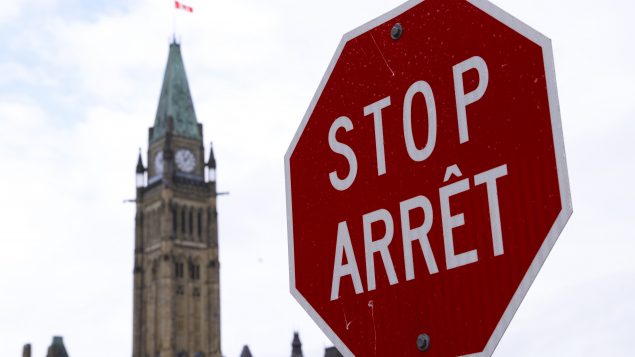 A stop sign is shown by Parliament Hill in Ottawa on Friday, March 13, 2020. (The Canadian Press/Sean Kilpatrick)

Canada’s MPs decided to suspend the House of Commons until Monday April 20, this morning due to concerns of the outbreak of COVID-19, commonly known as coronavirus.

The motion to suspend the House of Commons, also allows for the federal budget, which was supposed to be tabled on March 30, to be proposed at a later date.

To protect the health and safety of Canadians, the House of Commons is adjourned until April 20th. To Canadians concerned for their parents, for a friend, for a loved one, we are all united. We will face this together, and we will get through this together. #cdnpoli pic.twitter.com/srW6MMWjXE

The motion also passed the third reading of the bill C-4, which is Canada, United States and Mexico trade agreement (USMCA), also known as the new North American Free Trade Agreement (NAFTA). It was then adopted by Senate, and recieved royal assent Friday afternoon.

In Canada, there are almost 180 confirmed and presumptive cases as of Friday afternoon.

Canada’s Prime Minister, Justin Trudeau, is currently in self isolation at home after Sophie Gregoire Trudeau, his wife, tested positive for coronavirus.

This morning, the World Health Organization said there are more than 132,000 cases of coronavirus, with 5,000 deaths in 123 countries and territories. The WHO officially declared the coronavirus outbreak a pandemic on Wednesday.