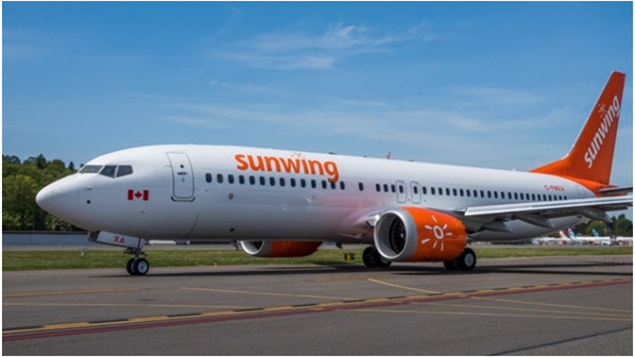 Sunwing with some 40 Boeing 737's announced it will suspend all flights as of March 23, and laying off all pilots as of April 8. A spokesperson for the airline said the airline cannot confirm when commercial operations would resume adding the unprecedented situation due to COVID-19 has had a drastic effect on business. (photo Sunwing)

Canadian travellers, and others, finding difficulty in returning home

The COVID situation has hit many travellers and vacationers who were abroad as the virus hits crisis proportions.

International travel has been restricted even as cross border travel is also tightened.

Canada’s airline Westjet announced in a news release that it will be suspending scheduled commercial operations for all international and transborder flights for 30 days starting March 31.  After Sunday’s last scheduled flights only ‘rescue’ and repatriation flights will take place Domestic flights will also be reduced by about 50 per cent.

In the first major layoff in the aviation industry, Sunwing , announced a layoff of its approximately 470 pilots. The airline typically flys to domestic locations in Canada and offers flights to the U.S. Mexico, the Caribbean, and South America as well as domestic flights across Canada is suspending all flights as of March 23.

Air Canada has also announced delays in most of its seasonal route startups, and many other flights to international destinations will be suspended.

As airlines cut back, many travellers abroad are finding it  difficult to return home with remaining flights limited and so many vying for the limited seating.

Major cruise ship lines Viking and Princess (Carnival), with 18 and 16 ships respectively, have both announced a halt to operations for at least the next two months. Virgin Voyages cruise line announced a suspension until August.

Meanwhile passengers aboard cruise ship MS Marina of the Oceania line are stuck at sea as ports have closed. The ship was to disembark passengers at the final destination in Lima Peru yesterday, but the ship was refused entry. An attempt was made to return to the previous port in Chile but that was closed as well.

Of the approximately 1,000 passengers, there are 148 Canadians on board including a former Canadian cabinet minister. There were no reported cases of COVID-19 on board and the ship is now headed for the unscheduled destination of Miami in hopes of docking there.

As of Tuesday night, Canada now has a reported 598 confirmed or presumed cases of COVID-19 with 5 deaths from the virus, and 9 recovered