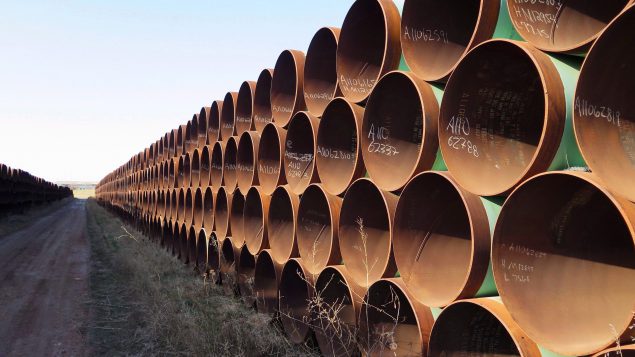 Pipes intended for construction of the Keystone XL pipeline are shown in Gascoyne, N.D. on Wednesday Apr. 22, 2015. TC Energy Corp. says it is going ahead with construction of its US$8-billion Keystone XL Pipeline project, with a helping hand from the Alberta government. (Alex Panetta/THE CANADIAN PRESS)

TC Energy Corp. said on Tuesday it would proceed with the construction of the long-delayed $8 billion US Keystone XL pipeline project after getting a $1.1 billion US equity investment from the Alberta government.

Once completed, the 1,947-kilometres-long pipeline will deliver abou 830,000 barrels per day of crude oil from Hardisty, Alberta to Steele City, Nebraska where it will connect with TC Energy’s existing facilities to reach U.S. Gulf Coast refiners.

The pipeline is expected to enter service in 2023, TC Energy said in a press release.

The investment from Alberta would substantially cover planned construction costs through the end of 2020, TC Energy said.

The remaining $6.9 billion US is expected to be largely made in 2021 and 2022 and funded through a credit facility and an investment by TC Energy, the company said.

In a statement, Alberta Premier Jason Kenney said the project was essential for the province’s future prosperity.

“This investment in Keystone XL is a bold move to re-take control of our province’s economic destiny and put it firmly back in the hands of the owners of our natural resources, the people of Alberta,” Kenney said. “The Government of Alberta is confident that this is a wise investment.”

TC Energy, which used to be known as TransCanada Corp., expects to buy the Alberta government’s stake once the pipeline is in service. It also plans to raise about $1 billion US by selling some of its shares.

Kenney said the provincial government will be able to sell its shares for a profit once the project is finished.

The pipeline has been delayed for more than a decade by opposition from landowners, environmental groups and Indigenous groups. The project was also rejected by former U.S. President Barack Obama.

The COVID-19 pandemic could cause further delays, TC Energy said.

The company, which had planned to start mobilizing heavy construction equipment in February, said last month that there was too much uncertainty to commit immediately to the project.

“During construction, we will continue to take guidance from all levels of government and health authorities to determine the most proactive and responsible actions to ensure the safety of our crews and community members during the current COVID-19 situation,” TC Energy president and CEO Russ Girling said in a statement.

Construction will advance only after every consideration for the health and safety of TC Energy employees, their families and of those in the surrounding communities has been taken into account, he added.