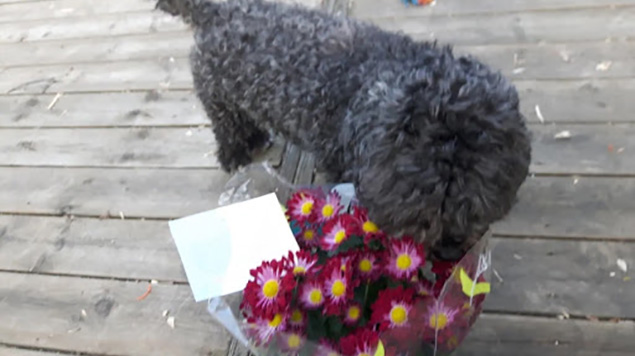 A bit of the haul that Laurie Brady discovered when she and her pet returned to their Hamilton home was evidently worthy of close examination. (Supplied by Laurie Brady)

Funny what flowers can do.

Their capacity to make things better goes back a long way and, guess what, it appears the goodness they bring never goes out of style.

Ask a whole lot of people in Hamilton, Ontario.

Laurie Brady, for one.

As the CBC’s Jennifer La Grassa tells the story, when Brady returned home from walking her dog last Saturday afternoon, she got a pretty darn nice surprise: a large pot of magenta flowers was sitting on her doorstep.

“What a nice thing for people to do,” Brady told La Grassa.

“It’s so nice to see the kindness of strangers and generosity.” 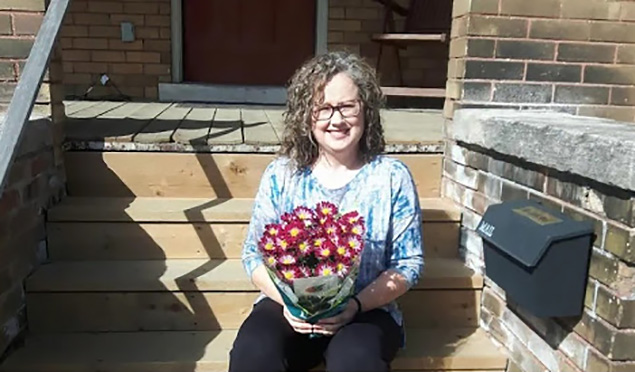 And Brady wasn’t the only one, telling La Grassa that other residents in her Kirkendall neighbourhood came home to be touched by a similar surprise.

So did a friend of hers in East Hamilton.

And so did dozens of others.

The flowers, which included hydrangeas and chrysanthemums, came with a note.

“We have plants that currently don’t have a home and we would like to spread some cheer to you and your family,” part of the note read.

It was from the Ravensbergen family that has a greenhouse business down the road in Smithville.

“(We) couldn’t operate as a normal store, (there was) no place for our product anymore and we felt we had to get these plants into homes, otherwise they would be thrown into a compost pile,” the company’s general manager, William Ravensbergen, told La Grassa.

In total, 10,000 plants were distributed by volunteers across Hamilton, Beamsville and Smithville.

Half the donation was sponsored by a company that wants to remain anonymous.

The other half was donated by the Ravensbergens.

William Ravensbergen was asked about messages offering thanks and as well as pictures of the unexpected flowers sent to the company’s Facebook page.